COLUMBIANA – Shelby County Sheriff John Samaniego was elected the 2021-2022 chairman of the Regional Organized Crime Information Center Board of Directors at ROCIC’s Fall Conference held in Biloxi, Mississippi, in August.

Much like his recent service on President Donald Trump’s Commission on Law Enforcement, Samaniego will serve as ROCIC board chairman in addition to his duties as sheriff. 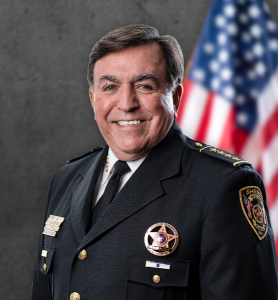 It is one of six Regional Information Sharing Systems Centers located across the United States that are congressionally funded through the U.S. Department of Justice, Bureau of Justice Assistance and consist of more than 9,000 law enforcement agencies.

The law enforcement agencies within RISS work together to combat multi-jurisdictional criminal activities and to promote officer safety.

Samaniego has more than 40 years of law enforcement experience. He retired from the Tuscaloosa Police Department as assistant chief of police in 2003 and began his tenure at the Shelby County Sheriff’s Office as chief deputy.

Samaniego continued as chief deputy until being elected Shelby County sheriff in 2014 and taking office in January 2015.

He was re-elected in 2018 and continues to serve in that capacity.

Samaniego has also served as the board vice-chairman and the board secretary. Since being elected to the board, he has traveled to the nation’s capital every year, visiting Alabama’s senators and congressmen to promote the vital services ROCIC/RISS offers to law enforcement across the nation.

“I’m honored to have the opportunity to continue our legacy of excellence and look forward to many more years of law enforcement partnerships and information sharing in pursuit of justice for all,” Samaniego said.