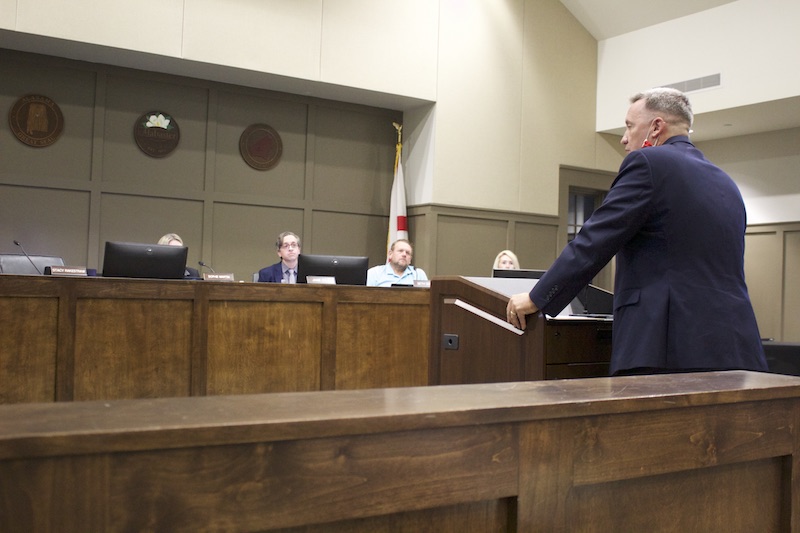 Mayor Scott Brakefield updates the Alabaster City Council on budgetary goals for the 2022 fiscal year on Monday, Sept. 13. (For the Reporter/William Marlow)

ALABASTER – The city of Alabaster has approved its budget for the 2022 fiscal year, with highlights including several staffing and departmental expansions as well as funding for additional essential services and infrastructure improvements.

The city’s budget for the coming year was officially approved on Monday, Sept. 13 during the City Council’s monthly meeting. The upcoming budget will total about $68.4 million across all funds, with most of the money being supplied through sales and property taxes as well as licenses and permits fees.

The city of Alabaster is also projecting $42.5 million of revenue in FY 2022, which represents a 4.2-percent increase over the prior year. Budgeted expenditures are projected to increase by 9.7 percent, or $3.7 million, to $42 million in FY 2022 as well.

“It’s exciting to pass this year’s budget, with approximately $42.5 million in the general fund budget, and I want to thank the hard work of the Finance Committee, which is three of our members of the City Council,” Brakefield said. “I think this year’s budget process went really smoothly, and one of the big reasons for that is they started early in the process and were heavily involved in the budget building process early on, so I think that really made a difference.”

Some of the highlights in the upcoming year’s budget include expansions to essential services and particularly waste management with $4.7 million being dedicated to sewer capital improvements.

Additional infrastructure improvements included $2.4 million for road repair and development, with some of the largest upcoming projects including road repaving, repairs along Alabaster Boulevard and the widening of Alabama 119. $75,000 is also being dedicated to flood mitigation to address drainage issues.

“We’d really love to see some of these projects get kicked off towards the end of this year and the first part of next year. We’ve learned a lot through the city this year, especially with all the rainfall, so we have some budget-line items for flood mitigation as well as have in the budget this year $4.7 million for sewer capital improvements,” Brakefield said.

Traffic calming measures are also being put in place around the city, with around $25,000 going to fund the project in several neighborhoods.

“We do have a lot of neighborhoods that have expressed interest in different traffic calming measures, and therefore we do have a lot in this year’s budget related to that so that the public safety committee can begin taking it under consideration,” Brakefield said.

Schools remained a continued priority with $6.45 million in contributions to the Alabaster City School System, but the city’s public safety department did receive a boost in funds with $500,000 being allocated to furnish a new police station.

The city’s capital projects for the coming year will largely focus on aspects relating to residential recreation, with improvements to Veterans Park as well as funds for the construction of the newly announced Patriot Park, an 8-acre piece of land which had been formerly owned by Kingwood Church.

Approximately $2.5 million of this year’s budget has been dedicated to building of Patriot Park, with construction likely to begin either spring or summer of 2022, according to Brakefield.

To support many of these projects and services, seven new full-time positions have been added to various departments across the city. The positions include: a public information officer, a public works operator, an assistant public works director, two park maintenance technicians, a permit clerk and a wastewater treatment plant operator.

The city’s 2022 fiscal year is set to begin in October.