Montevallo volleyball downs Indian Springs for 2nd in a row 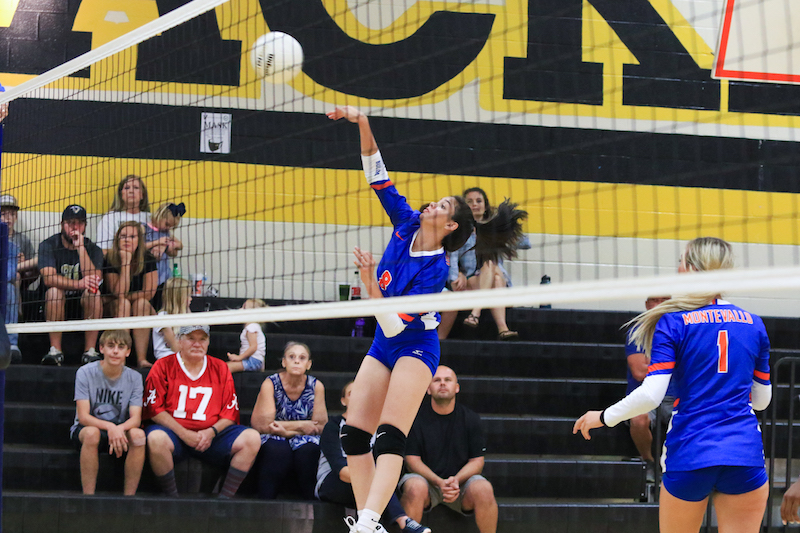 Montevallo’s volleyball team has picked up back-to-back wins in straight sets against Dallas County and Indian Springs. (For the Reporter/Dawn Harrison)

MONTEVALLO – Coming off a losing streak, the Montevallo Bulldogs have now put together back-to-back wins to bounce back, including an area victory and a win against a county foe on Tuesday, Sept. 14.

The Bulldogs won both in straight sets, taking down Dallas County and Indian Springs 3-0.

Against Dallas County, Montevallo won each set by at least nine points. The Bulldogs won 25-16, 25-15 and 25-14 to pick up the victory, getting better as the match went along.

Teasia Purnell was a highlight in the win with six kills, but it was a balanced attack in a big area win. The Bulldogs also got five kills from Kailey Boyd and four from Anna Kate Jackson, while Paige Johnson and Pheonix Dixon both had three.

Johnson led the team in assists with 13, while Jackson added eight. Those two, along with Bailey Hamrick, Purnell and Emily Gallagher all had at least three digs in the win as well.

That consistent effort from several on the team helped the Bulldogs gain some momentum back heading into the matchup with Indian Springs despite several days off.

Each set was a tight battle, but Montevallo found ways to squeeze out all three.

In the opening set, the two teams battled in a tight back-and-forth set with the momentum never full shifting one way or another.

That changed late, however, as the Bulldogs found a way to earn a two-point advantage at 24-22. They then closed out the set one point later for the three-point win and a 1-0 lead.

Montevallo’s confidence seemed to reach a peak in the second set. The Bulldogs gained the lead earlier this time around to take a 25-0 win.

Trailing 2-0, Indian Springs fought back in the third set knowing they had to win the set to stay alive.

It led to an entertaining span between the two teams in a set that went down to the wire.

The Bulldogs, however, had found late success in the previous two sets, and they found a way to do it again. They went on to take a 24-23 lead and closed out match point one point later to complete the sweep.

Purnell led the way with eight kills in the win, while Boyd was right behind with seven.