Thompson’s undefeated start continues in route of No. 4 Hewitt 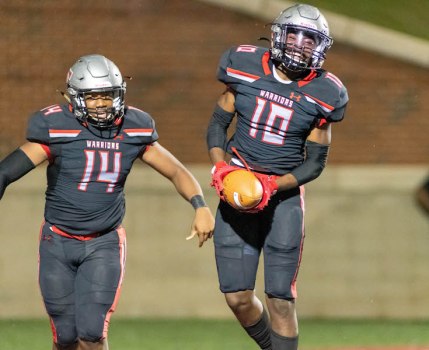 Thompson's Jayden Davis celebrates with Tyler Hicks after recovering a fumble in the end zone during Thompson's 42-9 win against No. 4 Hewitt-Trussville. (For the Reporter/Neal Wagner) 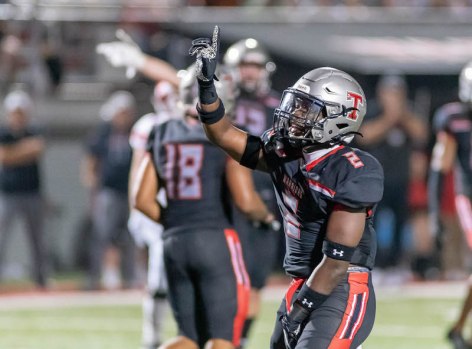 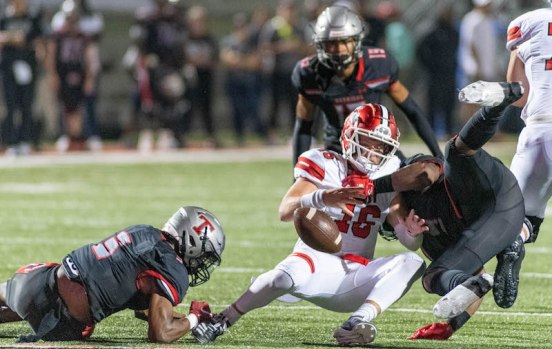 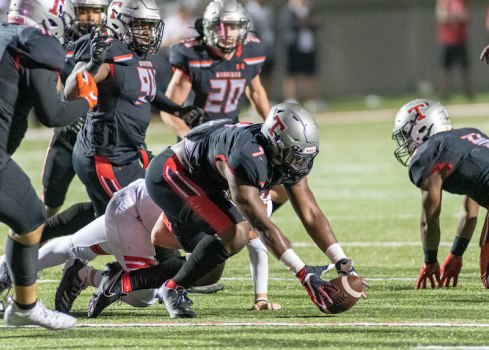 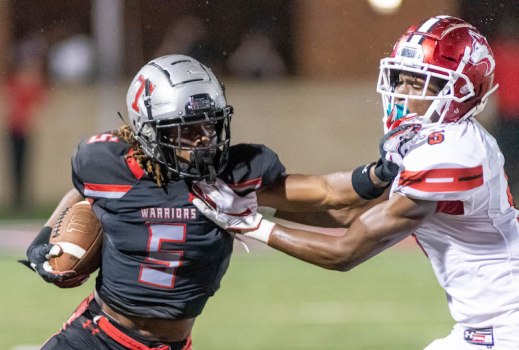 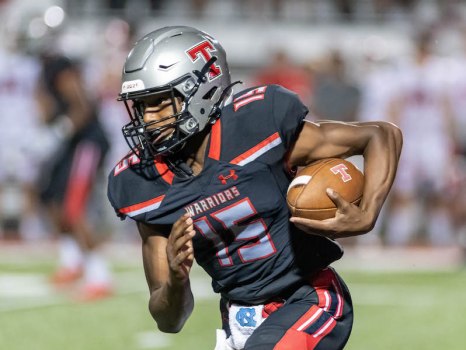 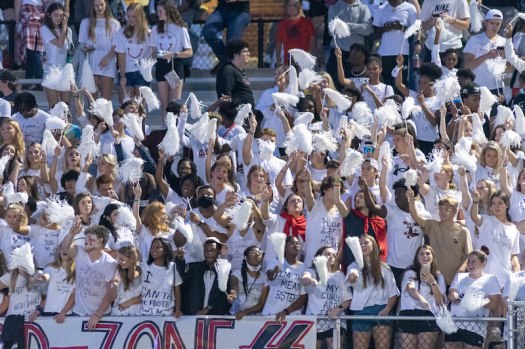 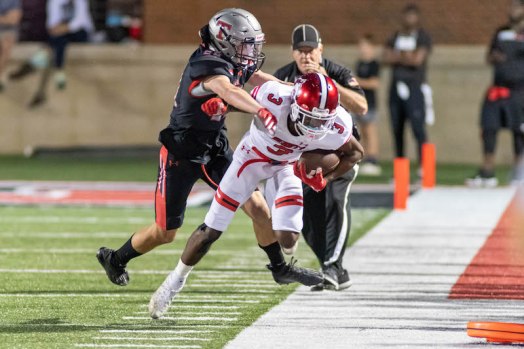 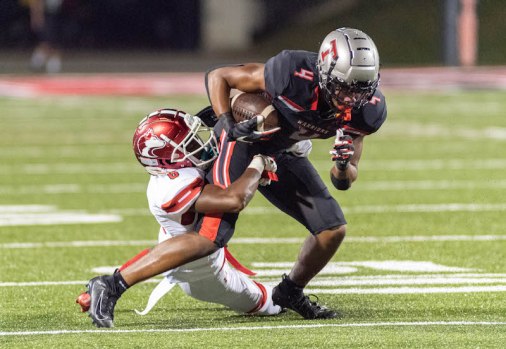 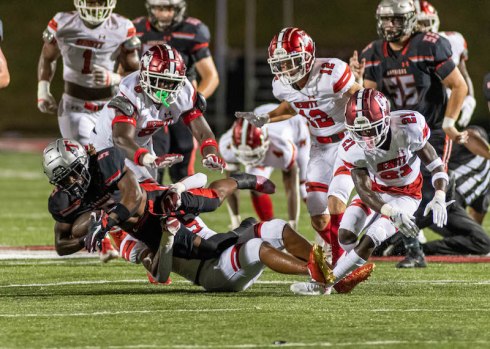 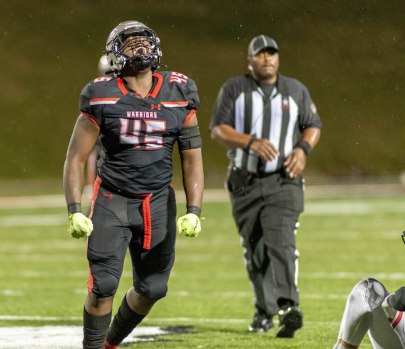 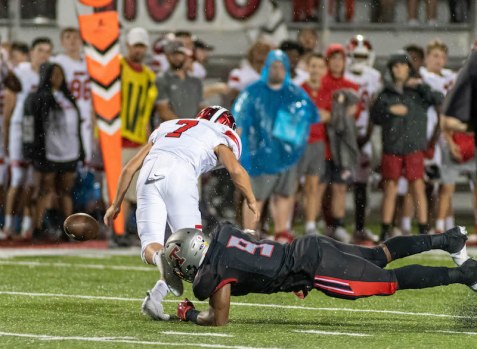 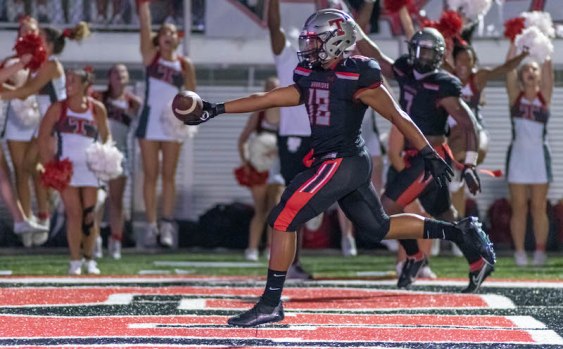 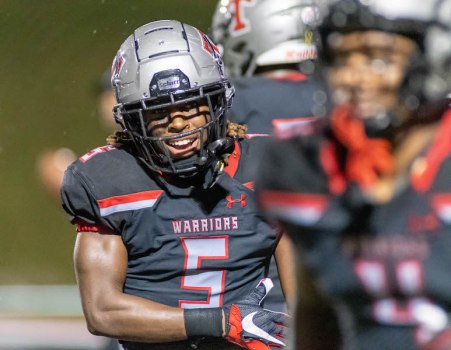 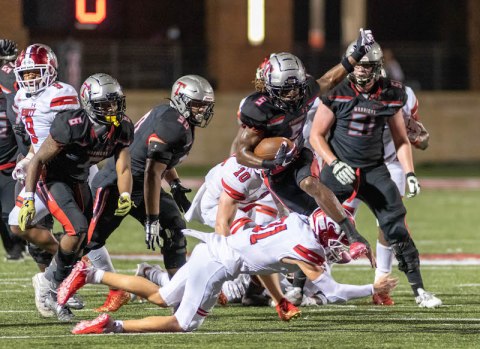 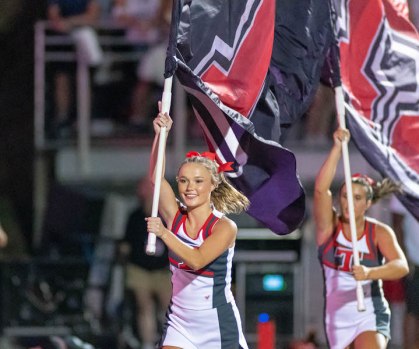 ALABASTER – The top-five matchup between Hewitt-Trussville and Thompson was the two-time defending champs’ best challenge yet, but as the fourth quarter rolled around, the Warriors had already put away the No. 4 team in the state on Friday, Sept. 17 to remain undefeated on the season.

Thompson used touchdowns on defense, special teams and a handful of big plays on offense to win comfortably at home, 42-9.

The game began as a defensive grudge match with the game’s first three drives resulting in just 9 yards, but Thompson drew first blood on its second drive of the night.

The Warriors mixed in four runs with three passes, as Conner Harrell eluded pressure on two rushes and connected with Jaylen Ward for 19 yards and Ryan Peppins on a 30-yard touchdown to get on the board.

Hewitt’s got its first chance when the Huskies reached Thompson’s 18-yard line, but the pressure forced quarterback Cade Carruth to run up the middle. He was hit hard and fumbled at the 23, giving the ball back to Thompson.

The Warriors needed only five plays from thre, as Harrell found Peppins again for a 10-yard score and a 14-0 lead.

Thompson’s defense made a massive play again on the ensuing drive, as Carruth faded back for a screen pass. Jeremiah Alexander pressured Carruth into forcing the pass and tipped it high in the air at the last second.

The tip gave junior linebacker Seth Hampton all the time he needed to run under the ball for an interception that he took 20 yards to the house for a pick-6 for the defense’s first touchdown of the year and a 21-0 lead.

The team’s traded three-and-outs before the Huskies went on their biggest drive of the half.

They used 10 plays to drive all the way inside Thompson’s 5-yard line, but Carruth couldn’t find his receivers, and Hewitt had to settle for a 20-yard field goal as time expired.

Thompson jumped out right away after the halftime break as Conner Harrell ran for 23 yards and hit a wide open Jaylen Ward for a 52-yard touchdown pass and a 28-3 lead.

The Huskies’ third blunder effectively sealed the game as they fumbled the ball on the ensuing kick return, which was recovered in the end zone by sophomore Jayden Davis for an insurmountable 35-3 lead.

Two drives later, Carruth found Omari Kelly for a 51-yard touchdown pass with 4:36 remaining in the third, but the Huskies didn’t threaten after that.

Carruth and Kelly entered the game as the state’s most productive duo and combined for 12 completions and 108 yards, but otherwise, Carruth wwas 3-of-21 for 12 yards.

Harrell connected again with Ward one last time with 8:15 to go in the game on a 23-yard touchdown pass to bring the game to its final of 42-9.

Harrell finished the night 15-of-23 for 209 yards and four touchdowns with 48 rushing yards.

Justin Pegues led Thompson in rushing and became the fourth different back to do so, running for 114 yards on 13 rushes, while Brandon Franklin added 52 yards on 12 carries.

Thompson’s defense has still not allowed double digits scoring this season and have only given up nine points in the first half of the regular season.

The Warriors have outscored opponents by a combined 259-12 through the first five games.

Thompson added 12 tackles for loss and a season-high four sacks leading to just 11 rushing yards for the Huskies.

Thompson will hit the road for a non-region game against Class 6A Mountain Brook next Friday, Sept. 24 at 7 p.m.