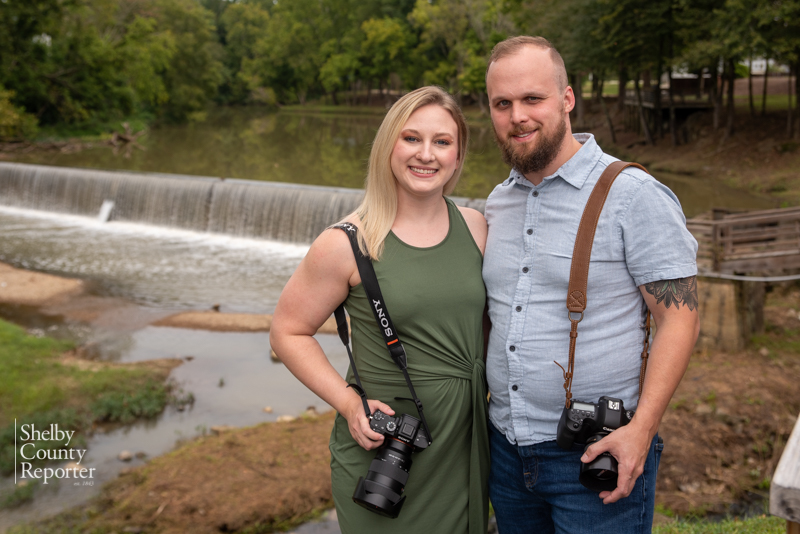 Christina and Daniel Dennis are the owners and operators of Untold Imagery Photography. (Reporter Photo/Keith McCoy)

HELENA – From the moment you sit down with them, it becomes apparent Christina and Daniel Dennis have amazing chemistry. The Helena couple has been together for 15 years, married for eight of them, and they carry that same chemistry into their photography business, Untold Imagery.

They do weddings, anniversaries, family photos and even boudoir shoots. Their gallery contains hundreds of photos of satisfied clients, though Untold Imagery just recently celebrated its one-year anniversary.

“It all started with our daughter, really,” Christina said. Before Untold, Christina was a teacher for 10 years, and Daniel worked for Nabisco. Both had full-time hours and wished they could have more time for their daughter. Then COVID-19 hit.

“I had missed a year and half of her life already and I was soaking up every second I could of her being with me,” Christina said.  “So, that kind of made me want to take photography, which I had already been doing as a hobby, and turn it into a thing.”

In September 2020, Christina began practicing photos on family members then slowly found a few clients. In April, Daniel decided it was time to join her when Nabisco began restructuring due to the pandemic. They used resources like internet videos and tutorials to help grow their knowledge and experience.

“After we had a steady stream of people come in, I thought how this has been a dream of mine forever, let’s go ahead and step away from one career, which was so fulfilling, and try something different. Then we can have more time with our little girl and we can do those family things we haven’t been able to do,” she said.

After gaining more clients, according to Christina, their business “exploded.” They began devoting their time and money to educate themselves on how they could be the best they could be. Daniel said they researched photographers around the world that they looked up to and admire, and then delved into their styles and education practices. They also made it a point to practice every day, whether it was taking photos of each other or their daughter.

“We wanted ourselves to stand out because there are so many great, wonderful photographers. We really wanted to find what makes us stand apart from the crowd,” said Christina.

Balancing a business as husband and wife can be intimidating to some, but Christina and Daniel use their years together to tackle whatever comes their way. “We know each other like the back of our hands,” Daniel said.

“We each bring a different aspect to the team. Daniel is amazing with lighting, whether that’s indoor with boudoir photos or outside with natural lighting, he’s a master. With me, I tackle the posing,” Christina said.

With each photoshoot, they try to “capture authentic moments in photography” like the small smiles or the stolen glances between the clicks of the camera.

“Yes, everyone loves the pose and smile and look at the camera photos, and we do those also,” said Christina. “But what we really love is capturing little moments in between. We want every client to make sure they feel safe and secure with us in those photography sessions so they can relax and feel freedom during their session.”

Christina said from the moment they’re contacted by a potential client, they make the effort to get to know them on a personal level, so they can feel as comfortable as possible during the shoot.

“Moms that are coming in with their families, it’s tough to get your kids ready, a lot of times you’re dragging your husband by his ear, so we work to build a rapport with you beforehand. We want to know what your insecurities are, what areas you don’t want to focus on, what areas you do want to focus on, whatever we can do to make the process easier so we can take that stress off of you, that’s what we want to do,” Christina explained.

“We know it can be stressful. We take family photos, too,” Daniel said. “So, any time we can take maybe that hour to help you feel better then that’s what we want to do.”

Daniel credits Christina with being great with communicating with clients. They even send out questionnaires asking what they’re comfortable with, and what their reasoning is behind the photos.

“A lot of people will say, ‘Oh, I want to do these photos for somebody else.’ We just like to remind everyone that no matter the sessions you’re getting from us, it’s going to be a reflection of you and who you are,” Christina said.

Their favorite shoots as of late have been boudoir shoots, which they said are surprisingly emotional. Christina said she started doing boudoir shoots to try something different, and quickly fell in love with them.

“When I started talking to the clients that were interested in it, I realized how much more it was than a photography session,” she said. “I get to know these people months beforehand, and we talk about families and their husbands, or if they’re single, themselves and where they are in life. We talk about their insecurities and what they’re going through in life, and it has turned into more than just show up and take some pictures. It’s turned into us taking on the role of that voice saying, ‘You’re perfect the way that you are. Embrace these things that make you special that you see as a flaw.’”

“When she asked me to come on board, I was like, ‘Are you sure?’ I didn’t realize how much hurt there was. It’s a healing process,” said Daniel.

The boudoir shoots have become so popular, they’ve created a separate website and Facebook page under the name Untold Boudoir. Christina and Daniel both agree the connections made during these shoots are something special.

“Whenever they come in on session day and they’re getting their hair and makeup done, they have their favorite snacks laid out, we want it to be a relaxed environment so they can step into this intimate session, and we can flip the camera over after a few clicks and say, ‘Look, this is you!’” said Christina. “Every single time they say, ‘Oh my gosh, I didn’t know I could look like that.’ So, then they get to see themselves in a whole different light, and afterwards they’re like, ‘You made me feel so beautiful, like I’m a model.’”

Daniel said elopements are a close second because they love to travel. They travel to whereever the bride and groom want to go, and get beautiful content while spending the entire day with them.

“We just recently did an elopement shoot with a local couple that took us out on Mt. Cheaha,” Daniel said. “We spent the whole day with them hiking and taking some great photos by the awesome waterfalls.”

The title of the business was created by Daniel, who said it came to him one day out of the blue. “I woke up one day and I thought it was perfect because we like to tell people’s stories that haven’t been told yet,” he said.

“That’s what we really love doing,” Christina added. “We love telling these stories and sharing these moments with people. We just want to tell your story.”