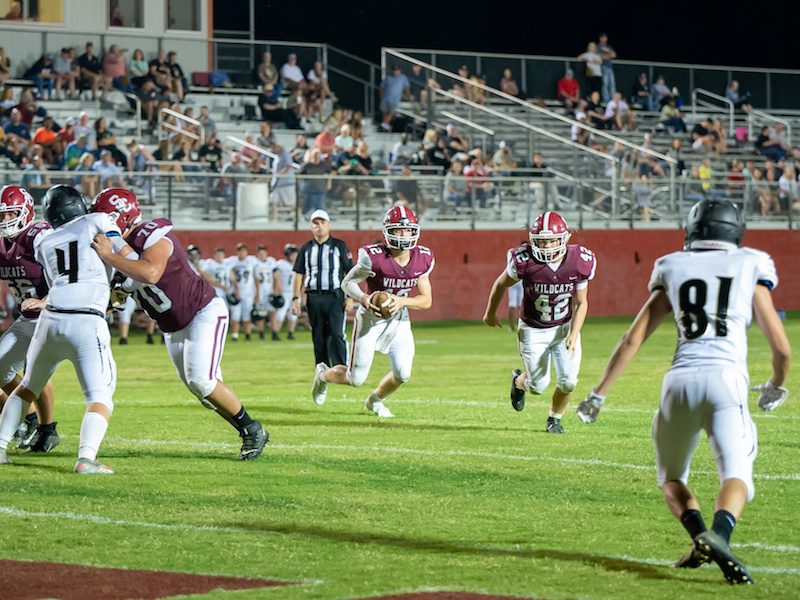 The Shelby County Wildcats fell to Demopolis in a battle of undefeated region teams on Friday, Sept. 17. (File)

By RIKCY RUSTON | Special to the Reporter

COLUMBIANA – The Shelby County Wildcats (2-2, 2-1) returned home Friday, Sept. 17 for a Class 5A, Region 3 matchup falling to the Demopolis Tigers 53-7 in a battle for first in the region.

The visiting Tigers got off to a quick start, which became too much to overcome for the Wildcats.

Within three minutes of the opening period, Tigers’ quarterback Drew Seymour connected with Craig Nichols on an 18-yard touchdown strike. Following a Wildcat punt on their next possession, Nichols found the end zone on an 8-yard run to put the Tigers up 14-0 at the end of one.

On their next two possessions, the Tigers extended their lead with two scoring strikes when Nichols, a lefty, connected with Jatayvion Scott on an 18-yard toss and Vincent Deas for a 51-yard strike down their own sideline. With four minutes remaining before the half, the Tigers held a 27-0 lead.

Following an SCHS punt, Wildcats’ outside linebacker Cooper Pennington picked off a Seymour pass to set up his offense at their own 39-yard line.

However, after a Shelby County turnover on downs at the Tiger 42-yard line, Nichols found Dyllon Williams six plays later in the flat for a 17-yard touchdown toss.

The Tigers scored on five of six offensive series in the first half and entered intermission up 33-0.

To begin the third quarter, the Tigers started a drive from their own 44-yard line that ended when Nichols went in from inside the 5-yard line. On their ensuing drive, Tigers’ running back Lamarion Kelly hit pay dirt on a 28-yard run.

The two scoring possessions extended the Tigers’ lead to 47-0 with two minutes remaining in the third.

To start the fourth quarter, Wildcats’ defender Seth Hall recovered a fumble to put the Shelby County offense in business at its own 41-yard line. A few sets later, Matthew Pearson bolted to the end zone on a toss sweep over right end from the Tiger 16-yard line.

The ensuing squib kick was returned for a score by the Tigers.

The Wildcats travel to Chilton County next week to take on the 6A Tigers in a non-region matchup.

Oak Mountain falls by 7 to Hoover in tight…