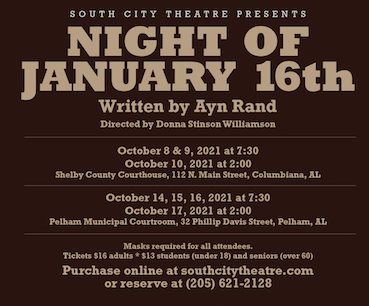 The Pelham Municipal Courtroom and Shelby County Courthouse will serve as the stage for South City Theatre's production of "The Night of January 16th." (Contributed)

On seven separate dates in October, Pelham’s South City Theatre will be going to court. Not real court, of course, but the theatre troupe will be putting on the theatrical production of “The Night of January 16th” by Ayn Rand.

The play is an audience-participation production surrounding the trial of a woman accused of murdering her former lover. The play’s twist? The production will be held at the Pelham Municipal Courtroom and the Shelby County Courthouse, and the audience will decide the verdict.

The play’s director, Donna Williamson, said she was drawn to the show after playing in the cast almost 20 years ago. The production is sponsored by the Shelby County Bar Association, and was chosen by the association for South City’s 20th anniversary season as it was “a good courtroom drama.”

“This is a full murder trial,” Williamson said.

The full description of the play is as follows: “On the night of January 16, Bjorn Faulkner, one of the richest men in the world, falls to his death from his 50th floor penthouse. Was it suicide? His business was in jeopardy. Was it murder? His long-time mistress and assistant, Karen Andre, was jealous of his recent marriage. All will be decided in the trial of Karen Andre.”

Twelve names will be drawn from a list of audience attendees, and those 12 people will serve as the “jury” for the trial. With the jury being different with each production, Williamson said anything can happen.

Williamson has been with South City for 10 years now. She went on the Board of Directors shortly after acting in her first show, then was named Artistic Director on Jan. 1 of this year. Williamson said she is very excited for everyone to see the production, and promises a good time. Getting permission to use the courthouses as the stage was vital to the show.

“After thinking about it, it just made sense to have all performances in a courtroom,” Williamson said. “There’s no set for us to build, our space is really too small for this show and using actual courtrooms gives it a realistic feel.  Our judge in the show is an actual Shelby County judge and has been most helpful with her courtroom experience. There won’t be any fancy lighting or music. It’s a murder trial and will speak for itself.”

The show was originally scheduled for late April/early May of 2020 for students, then was set to be part of the regular schedule in October 2020. Once COVID-19 hit, the play was pushed back. Williamson said she and her fellow theatre members are ready to get back to the stage.

“I want [people] to know that South City Theatre is back, and stronger than ever, after being dark for over a year,” she said. “We don’t typically do audience participation shows, and I want them to enjoy this experience.”