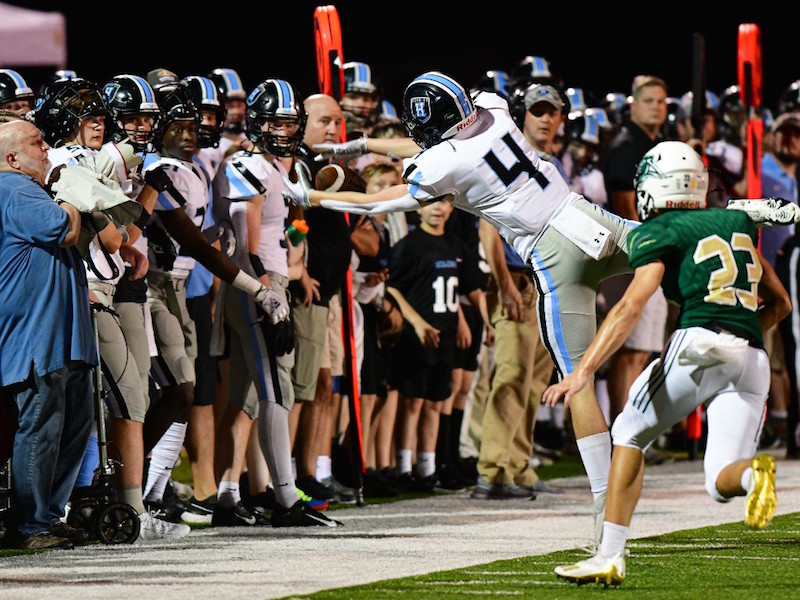 The Helena Huskies will host McAdory this Friday in the Game of the Week. (For the Reporter/Jamie Dawkins)

Just like that, we have hit the midway mark of the season. It is hard to believe we are that far along, but after this week, we hit the second half of the season as teams look to cement a spot in the postseason.

Coming off a thrilling week of elite matchups, this week will give us a break from region play, but that doesn’t mean the matchups are any less exciting.

It is a big week for many teams, as they’ll look to not lose momentum or regain it going into that important final stretch.

Helena vs. McAdory (Game of the Week)

Fresh off an emotional 37-34 rivalry win, Helena is sitting on top of the world right now, but they’ll have to come back to reality in a hurry with an undefeated battle against McAdory this week. The Yellow Jackets, like the Huskies, are sitting at 5-0 on the season and playing great football right now. The Jackets have scored 42 or more in three straight and given up 28 or less in every game. They’re scoring 37.6 points per game and giving up 15.2 points per game. Helena is also playing well on both sides, giving up just 11.6 points per game and scoring 34.2. Looking at those numbers, the Huskies are playing slightly better defensively and the Yellow Jackets slightly better offensively. How quickly Helena is able to shift its focus to this week will determine how successful the Huskies can be, but their defense will be better this week and keep them in this game. Helena 28, McAdory 24

The Thompson Warriors have put on a clinic so far this season. Going into last week, the argument was they hadn’t faced anybody. Well, now they have a 42-9 win against the No. 4 team in Class 7A and have outscored opponents 259-12 this season. This week, they’ll get a team playing similar to them, but Mountain Brook hasn’t done it against anyone remotely as talented as Thompson. The Spartans have outscored opponents 199-17 this season with an average of 39.8 points per game, while they’re giving up just 3.4 points per game. Thompson, however, is scoring 51.8 points per game and giving up just 2.4. They won’t all of a sudden lose that tough against 6A Mountain Brook. They’re just too talented at every position, and they will find a matchup to exploit. Thompson 42, Mountain Brook 10

Coming off a bye week, Calera has a big opportunity against Pell City this Friday to put together its first win streak in several years. The Eagles won 21-0 against Chilton County the last time they took the field and now get a 1-3 Pell City team. With Calera likely needing to go 2-2 in the final four region games to make the playoffs, this is a big non-region game to keep confidence high. Coming off a bye, the defense should be refreshed, while the offense is playing well behind Preston Stokes, Braylyn Farrington and Alabama commit Kobe Prentice. Calera 28, Pell City 20

When it comes to non-region games, it doesn’t get much bigger than this one. Pelham is coming off a heartbreaking 37-34 loss to rival Helena in a battle for first in the region last week, while Chelsea is coming off a bye week sitting at 0-4 on the season. Both need to respond in a big way to gain confidence going into the second half. The Panthers are looking for home field advantage in the playoffs the rest of the way, while Chelsea should have a great chance at three wins in a row to fight for a playoff spot after this game. The Hornets have been on the verge this season, losing their last two games to two of their toughest opponents by two to Homewood and by seven in overtime to Briarwood. They are arguably a few plays away from being 3-1 instead of 0-4. Pelham has shown what is possible for them this year and is a few plays from being 5-0. This game will be extremely close, especially with Chelsea off a bye week, but Pelham should have a slight edge defensively. Chelsea 28, Pelham 31

Briarwood has been as consistent as it comes this season, scoring 42 points in four consecutive games and 41 in the first game for an average of 41.8 points per game in a 5-0 start. The Lions are also giving up just 19 points per game and get a Mortimer Jordan team that is 2-2 on the season. The Blue Devils are giving up 30 points per game, which is the biggest concern against a Briarwood offense that is improving. Led by Christopher Vizzina, the Lions’ offense is rolling with receivers stepping up, Luke Reebals playing well and more importantly the offensive line playing lights out. Tough to see that group not scoring in the 40s again in this one. Briarwood 42, Mortimer Jordan 14

The Cornerstone Chargers are coming off their second win of the season in a 67-12 route of Snook Christian last week, and now they get an Abbeville team who has lost two in a row to Lowndes and Pickens. These are two similar teams on paper, so we’ll go with the Chargers putting together a win streak. Cornerstone 21, Abbeville 20

Coosa Valley just missed winning two in a row in a 14-6 loss to Fort Dale last week, and now the Rebels will take on a 4-0 Jackson team that has given up seven or less in every game with two shutouts. It’s a team that is also scoring 41.8 points per game. Coosa Valley 7, Jackson 35

Coming off a big in-state win, the Evangel Lightning will get another big test against Lighthouse this Friday. The Lightning won 63-24 in their best showing of the season last week to hand Freedom its first loss of the season. Now, they’ll get Lighthouse who is 3-1 and off a big 34-32 win against Ezekiel. Lighthouse, however, lost to Freedom 40-6. That comparison along with Evangel seemingly finding its way should set up the Lightning for a win. Evangel 47, Lighthouse 15