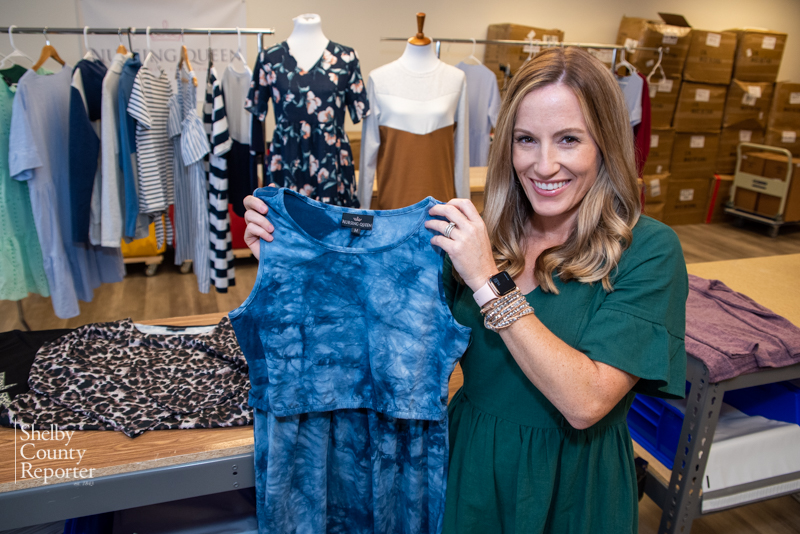 It’s something Nursing Queen’s owner, Quinn Reitz, said she relentlessly searched for while she was a nursing mother.

“Back in 2014 when I had my first son, I started looking for nursing clothes, and I realized there was a real need for cuter styles,” she said. “Things that weren’t clingy, things that had more cotton designs, and so I just decided I was going to start my own clothing line.”

Nursing Queen launched in 2017 with Reitz working out of her garage and basement. Once both of her at-home work spaces were full of merchandise, her husband suggested it was time she move to a bigger space. She found her current space in Pelham, and opened in June 2021.

While she said the space acts mainly as a warehouse, there is a front floor area where moms can peruse and shop. Reitz designs every piece herself, taking designs she admires from her everyday clothes and tweaking the style to “make it into a nursing style with easy access for nursing.”

The key word with Nursing Queen is “variety,” as Reitz offers everything from dresses, T-shirts and sweatshirts to formal wear for weddings and other higher fashion events. She is particularly proud of one item specifically.

“The number one thing I could not find while I was nursing, it just did not exist, was a nursing camisole or tank top with built-in padding,” Reitz said.  “I ordered stuff that said there was padding from like Australia and France, and it just did not exist. It’s just so annoying. I’m like, why don’t they make nursing camisoles with built in padding? And I didn’t want it to look like an undergarment. I wanted it to look like a normal tank top that I could wear with shorts that look normal and had padding for coverage and leaks.”

Another major feat Reitz is proud of is the fact everything in her store is made from cotton, as opposed to the typical rayon/spandex blends you find in other nursing clothes. She makes sure that all of her clothes offered are reasonably priced. Even with the high expense of using quality material, she does not want to take advantage of prices.

“People are not going to pay $100 for a hoodie,” she said. “I know I wouldn’t. But, that’s why I’m direct to consumer so I don’t have to mark the price up three or four times for other retailers. We try to keep everything below $50 or $60.”

Reitz said there are several factors that play into why other retailers don’t focus on providing the services she provides, issues ranging from the short amount of time women actually nurse their children to providing out-of-date styles.

“I think it’s because it’s such a niche market. Other retailers don’t see a need to focus on that area because most women don’t breastfeed past six weeks, and then there’s an even larger drop-off after three months. So, I think major retailers don’t see the profits in such a short-term client.

“I also think some small businesses try to make it and they fail because they’re not offering new moms what they’re looking for which is cute, stylish clothes that make them feel like themselves. If you’re not offering modern styles that are affordable, you won’t make it,” she said.

Her other goal was making clothing that women would want to keep even after they were done nursing. “The zippers are so discreet that nobody will see them,” she said.  “If it looks too obvious, I won’t go with the design. I’m not nursing anymore, and I still wear all of my nursing clothes because I think they’re cute. So, you can get a lot of use out of them for sure.”

Overall, Reitz wants all of her patrons to feel like they’re dealing with a friend, someone who has been through what they’re currently going through. She proves this by hiring mostly mothers to work in the store. She prides herself on being a “small mom-run business.”

“I try to have the number one best customer service in the market. We will bend over backwards for people. If they need something for a special event, I’ll cover next-day air shipping. If they miss the 30-day return policy, I understand new moms get busy. We are a small business and we try to be there for the customer and make it a personal experience,” she said.

“You know that you’re ordering from someone who is going to stand behind the product, and we are very honest,” Reitz said. “People will say, ‘It’s so much cheaper if you switch to this fabric or if you do this,’ and I don’t want to make it cheaper. I won’t raise the price either. I want people to get quality items without paying an arm and a leg.”

You can peruse Nursing Queen’s merchandise on their website at nursingqueen.com or visit their storefront at 206 Oak Mountain Circle Pelham, AL 35124.