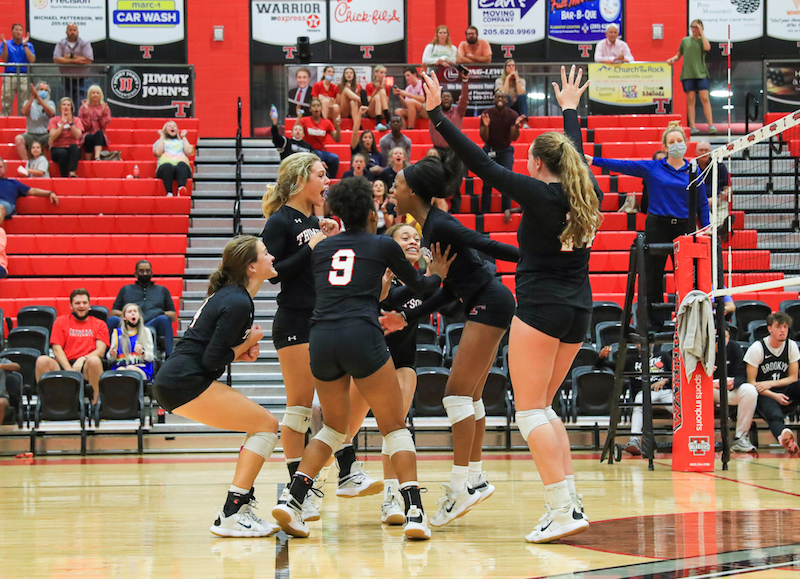 Thompson’s volleyball team took down two No. 1 teams on Sept. 14 and 16 to take over the No. 1 ranking in Class 7A. (For the Reporter/Dawn Harrison)

MONTGOMERY – The Thompson Warriors have quickly cemented themselves as a legitimate contender for the Class 7A volleyball state championship.

After taking down previous No. 1 Spain Park, the Warriors took over the top spot in the 7A standings and followed with another win against a top-ranked team.

This time, Thompson beat Class 4A No. 1 Montgomery Academy 3-1 to improve to 15-6 on the season against one of the state’s most difficult schedules.

Against the Eagles, Thompson was able to make it two in a row against top-ranked teams because of a fast start.

In the opening set, the Warriors looked like the best team in the state, easily pulling away from Montgomery Academy. After gaining early traction, they went on to win the opening set 25-12 for a 1-0 lead in the match.

The Eagles attempted to bounce back in the second set, and looked improved, but Thompson’s built up confidence gave the Warriors a slight edge to pull away late for a 25-19 victory.

Down 2-0 in the match, Montgomery Academy knew what was needed to have a chance at a comeback win.

The Eagles dug deep and found some success in the third set, which ultimately led to them pulling off a 25-22 win to take their first set of the night and make the score 2-1.

The uphill climb, however, became too much for Montgomery Academy.

Thompson knew the advantage it had with the Eagles still needing to win two more sets to complete the comeback, and in the fourth set, Thompson found its rhythm again.

Similar to the opening set, the Warriors made it known just how talented they are with another dominant 25-12 set victory to complete the 3-1 victory.

The Warriors now sit atop the 7A standings with their 15-6 record just ahead of Spain Park, McGill-Toolen, Hoover and Bob Jones in the top five.