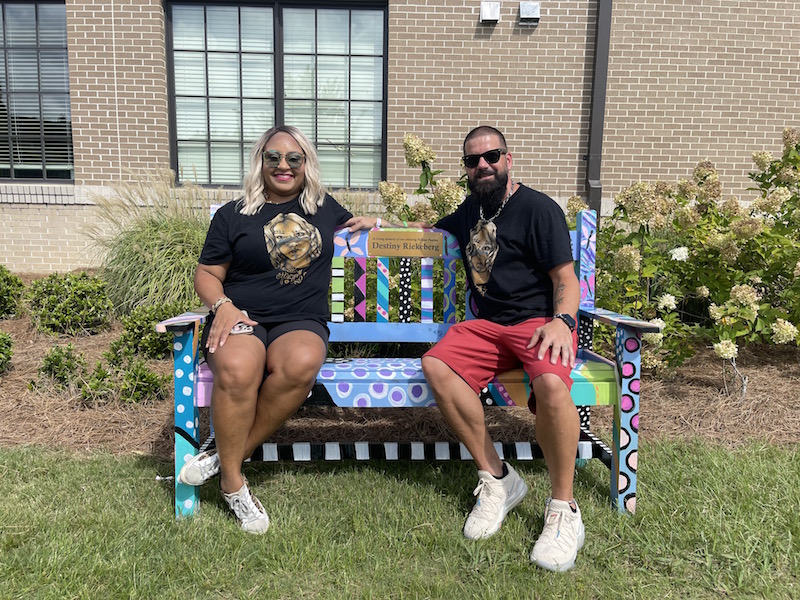 The Riekebergs sit on a “friendship bench” honoring Destiny's memory and legacy at Pelham Ridge Elementary School. This bench is different from the one that will be installed at Pelham City Park along with her statue. (Contributed)

PELHAM – People are remembered for many different reasons—usually it is because they did something great or left a significant impact during their lifetime. One such person was Destiny Riekeberg of Pelham, whose story of fearlessness during her battle with childhood cancer made her unforgettable.

Now, with the approval of the Pelham City Council, a life-size statue and bench will honor and memorialize Destiny at Pelham City Park.

“To any bereaved parent, their worst fear is that their child would be forgotten, and we want to make sure that Destiny will never be forgotten and that her legacy lives on through her foundation and the memorials,” said Lacretia Riekeberg, Destiny’s mother.

The idea for the bench originated from a group of Pelham parents who know the family well, while the idea for the statue was Lacretia’s thought after hearing many suggestions. The bench is already complete and will display many different photos of Destiny.

“They wanted us to feel like we will always be a part of the Pelham community, and Destiny will always be remembered,” Riekeberg said. “With Destiny, everything she did was bold, and she made an impact. I felt that a life-size statue is bold, you can’t not see it, and it will make a lasting impact versus just reading a memorial.”

The statue has yet to be created. Both will be unveiled at the same time at a location between the youth football field and the youth softball and baseball fields, in Pelham City Park across from Pelham Park Middle School.

The plan is for the statue to be completed before Destiny’s Jan. 22 birthday. On that date in 2022, she will have been 11 years old, Riekeberg said.

The proposed fixtures are not the only ones that will tell Destiny’s story. A separate bench has been installed at Pelham Ridge Elementary, and it was unveiled Aug. 28. It’s a very colorful memorial bench created in honor of Destiny called “The Friendship Bench.” It also bears a plaque indicating its purpose.

“It will work as a friendship bench,” Riekeberg explained. “Someone’s going to see you sitting on that bench and recognize that you’re having a tough day, and another friend is going to sit by you and comfort you.”

Riekeberg added they are in the process of raising funds for the statue via a memorial fund. A goal has been set at $15,000. The statue will be made by a Utah-based company, but the design has not been finalized.

Those who wish to contribute may do so by contacting Riekeberg on social media. A link will be posted on the website of the Destiny StrongER Foundation, Destinystronger.org.

“All her friends can come and spend time on the bench, and it will be like they are coming and spending time with Destiny,” Riekeberg said.