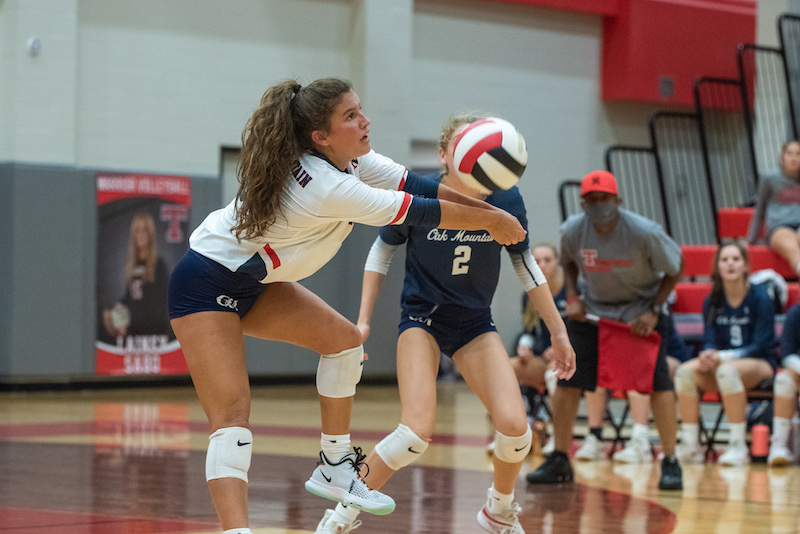 The Oak Mountain Eagles picked up a crucial area win against Tuscaloosa County on Sept. 21. (File)

TUSCALOOSA – It has been an up and down season for the Oak Mountain Eagles, but still inside the top 10 of the Class 7A standings, they improved to above .500 on Tuesday, Sept. 21.

Oak Mountain improved to 2-1 in area play with the victory, which is big due to competing in an area with No. 1 Thompson and No. 4 Hoover.

The Eagles, who had hit a tough stretch this season, had a difficult start in the opening set.

Tuscaloosa County was able to put together a strong start, and more importantly a strong close to the first set.

The Eagles, however, flipped a switch and did so quickly.

Motivated after losing the opening set, they put together a different effort in the next two sets.

It started in the second set, as Oak Mountain was able to create separation and pull away for a 25-16 win and even the match at 1-1.

That gave the Eagles the spark they needed in the third set. With that, they put together the most dominant set of the night for either team en route to a 25-13 victory to take the lead in the match for the first time at 2-1.

Tuscaloosa County was now in need of winning the fourth set to stay alive, which led to another tight battle similar to the first set, but the Eagles had shifted momentum, which paid off.

After gaining a 24-23 lead, they were able to close out match point to finish off the 3-1 victory.

Kathryn Smith was the team’s leader in assists with 40, while Makayla Ragland led the team in digs with 19.