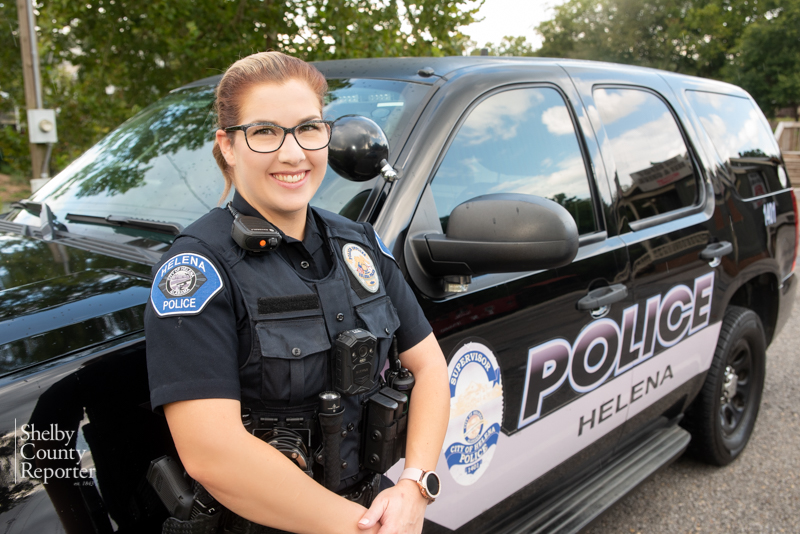 HELENA – Members of the Helena community are very familiar with the smiling face of Helena Police Department’s Officer Kelsey Vansickle. Whether she’s patrolling through the neighborhood or working a community event, Vansickle always has a smile and a hello for Helena residents.

Vansickle joined the Helena PD in October 2020, and in her time working the force, she has gained the admiration and respect of everyone she encounters. On Sept. 12, Helena’s Police Chief Brad Flynn posted photos of Vansickle interacting with the community to honor her for National Police Woman Day. The posts, on the department’s Twitter and Facebook pages, received a huge response from the community, with many posts praising Vansickle for her hard work and dedication to the force.

Vansickle said the post took her by surprise, but she was very appreciative of the gesture.

“I really didn’t know about it at first. I found out after people started sending it to me,” she said, laughing. “I thought it was very kind and genuine.”

According to Vansickle, none of the pictures in the post were staged. The photos of her interacting with children and parents in the community is something she does every day, and she enjoys it thoroughly.

“I feel like those pictures were representative of who I am as a person. I don’t always like staged pictures, so those pictures were really just me hanging out with the community, and doing what I naturally do. That meant a lot to me that the Chief was highlighting that along with my accomplishments. I feel appreciated.”

One of the things she loves most about working for the Helena Police Department is its dedication to providing the best service to the community.

“This department puts a lot of weight on our relationship with the community, and that’s something I also do on a personal level,” she said. “I really feel like my personal values are really in line with the police department, and that means a lot to me.”

In addition to her work with the Community Outreach Program, Vansickle also works with the Veterans Outreach Program (she herself is a veteran of the United States military), and she recently became a part-time detective specializing in crimes involving children. Vansickle said she wants to be an ally for children in the community. “I want to be the smiling face they feel like they can come talk to,” she said.

The community’s response to the social media posts touched Vansickle, especially when she saw how many people were so comfortable using her first name.

“It means they actually know me personally, and that means even more. They’re people I’ve actually interacted with, not just commenting on a random Facebook post,” she said. “That means a lot, because I really love meeting people and engaging with people, and if they’re able to see that and place a name with a face that means a lot more down the road.”

Being a role model for little girls hoping to serve their community is definitely one of the highlights of the job. She said she’s excited about being able to represent other women first responders.

“I grew up in a military household,” she continued, “and I don’t think it ever crossed my mind that I couldn’t be a police officer, but I realized that to other little girls, they may not realize that until they see me. That always gets me really excited. I take a lot of pride in my position, and that just brings it home when a little girl tells me something like that.”

“As cliché as it may sound, it’s just the most close-knit community I’ve ever worked for, and they are so welcoming,” she said. “Our efforts are so well received, we feel appreciated. Our community supports us, and we support the community. It’s a great working relationship, and it’s such a great place to work. Even outside of the police department, my coworkers are some of the firefighters and some of the guys work for the street department. Everyone is just so friendly and community-oriented. It’s just the culture here.”