Ultimately it is just a game, but a game that heals 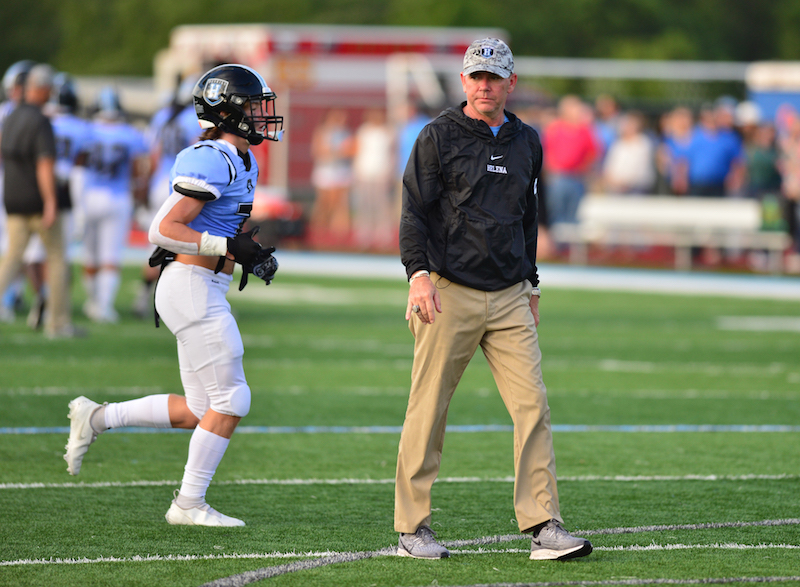 The night before facing off against the team’s biggest rival in a battle for first atop the region standings, Helena head football coach Richie Busby watched as his dad was put on a ventilator.

Admitted to the hospital on Aug. 25 due to COVID-19 and kidney issues, he had faced an up-and-down battle before being placed on the ventilator on Sept. 17.

One thing Busby and his dad shared, however, was the game of football. And while it is just a game with much more important things going on in the world, it is a game that helps heal.

Just before being put on the ventilator on Thursday night, Busby’s dad told him, “I’m not going to stop fighting, and you go get ‘em.”

So that’s what his son did.

In arguably the Huskies’ biggest game of the year, Busby joined his team on the sideline and led them to a thrilling 37-34 win that went down to the wire with J.C. Sivley’s 70-yard touchdown catch with 1:51 left making the difference in the win.

In that moment, Busby knew his dad was right alongside him, saying what an emotional week it was for him but adding that his dad was there with them and would have been proud of the kids.

During my weekly pregame show, I brought up the emotional situation and talked about how big of a boost it could be for Busby and the team to play for something bigger than themselves. In doing so, I had an obvious voice crack and my emotions began to turn as well.

Then, after the game, talking with Busby and listening to his comments about his dad and family, it was tough not to let the emotions overcome either of us.

Imagine doing anything less than 24 hours after your dad was placed on a ventilator battling for his life, much less one of the biggest moments of your year.

But what I saw before the game is the same thing Busby and his dad both realized, and that is what the power of football can do in healing.

A sport that creates a family atmosphere among players and coaches, many of us have such a passion for it because of our competitive spirit and the relationships it creates.

If there is anybody who can lift you up in a time of need, it is the team you go to war with every day. You push each other to the limit from summer workouts, to fall practice, to a grueling season, but you grow closer each step of the way.

It creates a comfort system that makes you want to be around those people during the most difficult of times.

Not only did Busby have that on Sept. 17, but his dad, who cheers for the team each week, is part of that family as well and wanted his son with that extended family.

In the most recent update, Busby said the 24-hour span between Wednesday, Sept. 22 and Thursday, Sept. 23 was key in his dad’s health. Yet again just two days before a top-10 battle against an undefeated McAdory team.

And once again, he knows his dad will be right beside him as the team’s biggest fan regardless of the circumstances.