Washington shines as Helena wins double-OT thriller against No. 6 McAdory 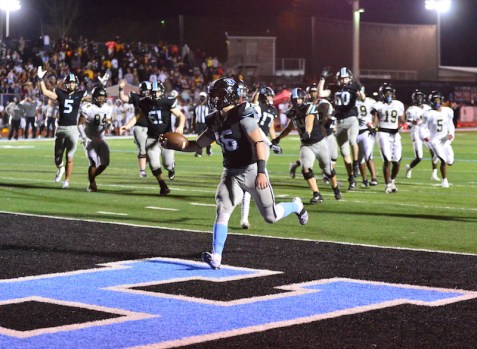 Helena's Joseph Roberto scored the game-winning touchdown in double overtime on Friday, Sept. 24 to give the Huskies a top-10 win and a 6-0 record. (For the Reporter/Jeremy Raines) 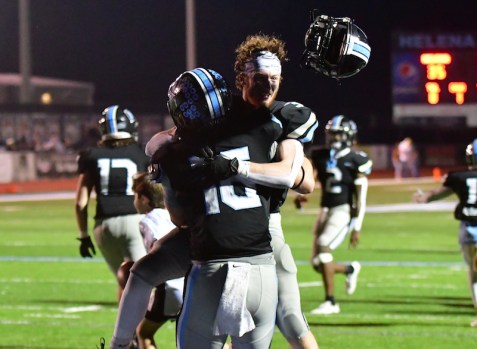 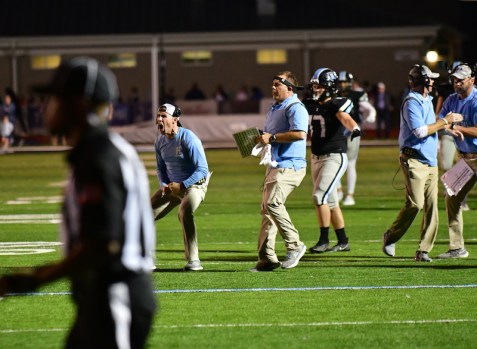 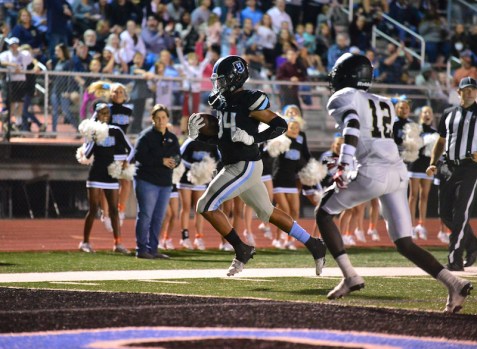 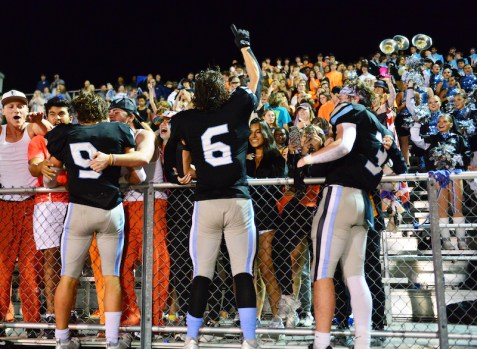 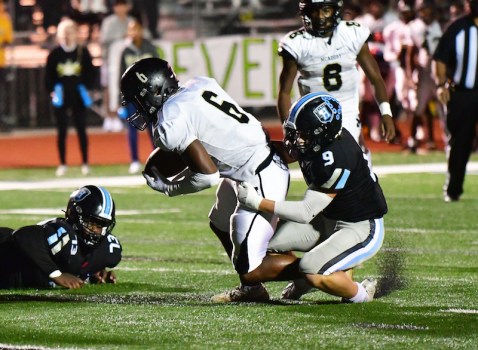 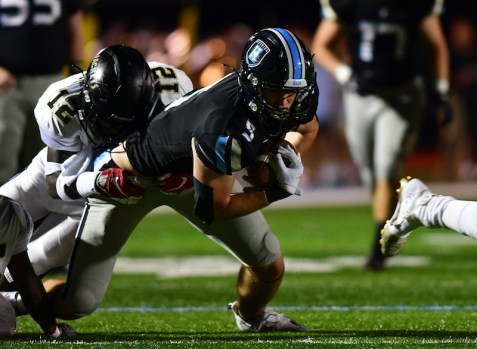 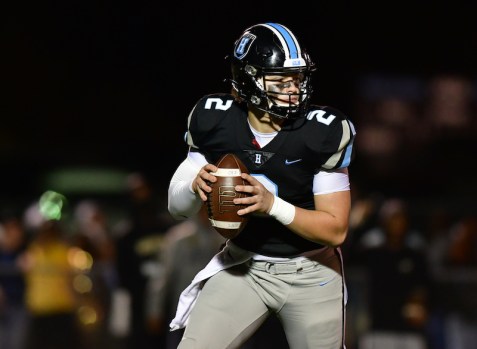 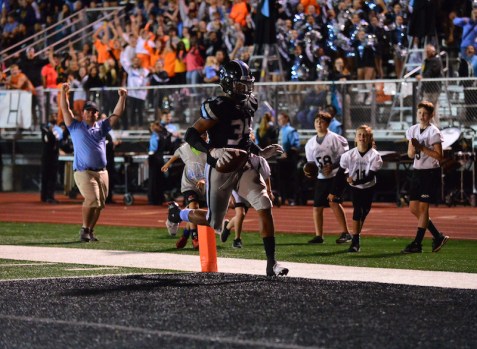 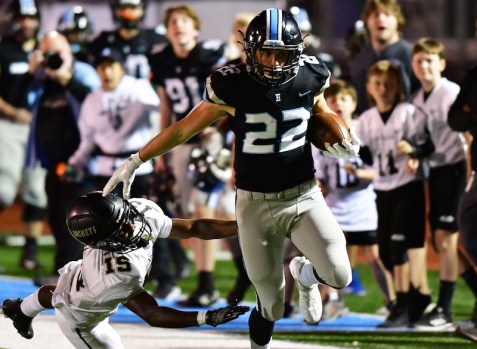 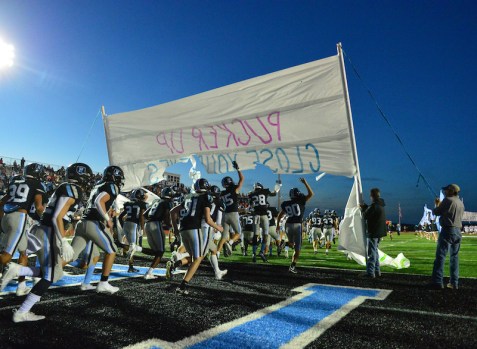 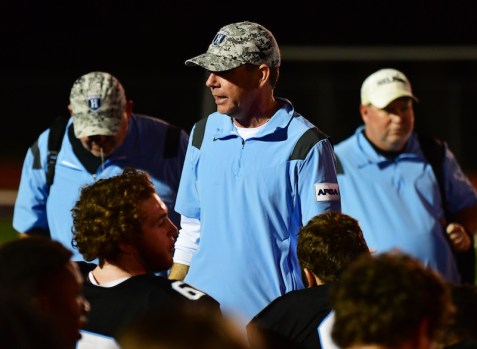 HELENA – It wasn’t how Helena started on Friday night but rather how they finished as the Huskies won a double-overtime thriller when Joseph Roberto plowed into the end zone to break a 35-35 tie and give the Huskies a 41-35 win over McAdory in a top-10 battle on Sept. 24 to remain unbeaten on the season.

Despite the amazing finish, Helena was surprised early in the first quarter as McAdory punched Helena in the mouth with passing touchdowns of 37 yards and 34 yards. McAdory quarterback Cameron Shepherd found wide receiver Kris Merritt on both occasions to take a quick 14-0 lead.

However, Helena didn’t quit as Helena head coach Richie Busby described it best as a 12-round fight that the Huskies were able to withstand.

“We warned them that they’re a high powered offense and we’ve got to control our emotions and fight for 12 rounds,” Busby said. “We talked all week this is a 12-round fight and it actually went a couple extra, 14. But our kids withstood it, and I’m super proud of them.”

One of the main Huskies’ that battled the toughest against McAdory was running back Jordan Washington who finished the night with 34 carries for 270 yards and four touchdowns. All four touchdowns and the majority of Washington’s yards all came in the first half.

Once trailing 14-0, the Helena offense went to work as the offensive line provided large holes for Washington to run through. After Washington scored his first touchdown from 13 yards out, he reeled off a 73-yard run to set up an 11-yard touchdown run that tied the game 14-14 with 10:30 remaining in the first half.

As the Helena defense continued to make stops, Washington became unstoppable as his third rushing touchdown became the longest of the night when he sprinted 70 yards for a touchdown with 4:44 left in the first half to give Helena its first lead 21-14.

To cap off the first half, Washington padded his stat sheet even more as he kept churning toward the end zone for a 2-yard touchdown that gave Helena 28 unanswered points for heading into the half.

“Jordan had a great game, and he took a lot of hits tonight,” Busby said. “He’s the one that’s carried most of the load for us, so we’ve got to find a way to get some other backs mixed in. In games like this it’s going to come down to blocking, tackling and somebody making a play, and two weeks in a row that’s held true.”

In the second half, McAdory never wavered and mounted its own comeback as Shepherd scored his third touchdown of the night by scampering 33 yards for a touchdown to make it 28-21 Helena in the third quarter.

After taking a number of carries and hits, Washington was unable to break free for another rushing touchdown in the second half, but Shepherd continued to lead the Yellow Jackets’ offense late in the game.

Needing a score, Shepherd led the Yellow Jackets on a 93-yard drive in just six plays as Roderick Thomas scored from 4 yards out to tie the game 28-28 and eventually send it to overtime.

To start overtime, Helena had the ball first and wasted no time as Roberto took the ball in the shotgun and ran off the left side for a 10-yard touchdown on the first play to give Helena a 35-28 lead.

McAdory needed a touchdown and they responded just like they did in the second half. Following a 9-yard run, Shepherd scored from a yard out on a quarterback sneak to tie the game 35-35 to send the game to a second overtime.

McAdory went on offense first to start the second overtime, and that is where the Helena defense made the biggest play of the night. On fourth-and-goal at the 1-yard line, the Yellow Jackets handed the ball off, and the Helena defense formed a wall as McAdory couldn’t cross the plane and the Huskies got the ball back to its offense with a chance to win.

With the opportunity to win, Roberto took the ball on the first play and wasn’t denied as he churned forward past the goal line to give Helena the wild 41-35 victory as Helena moved to 6-0 on the season.

“Joseph Roberto is a hell of a football player and he’s going to continue to be one,” Busby said. “He could be our other tailback, but at this level of football it’s just hard on their body. But in situations like that, he’s clutch. Our kids never give up, they never quit and that’s what I’m most proud of our program. Our kids they do not know how to quit and you’ve got to put them away to make them stop.”