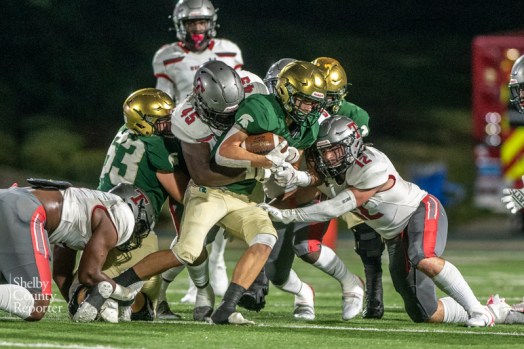 Thompson's defense posted its fourth shutout of the season in a 51-0 win against Mountain Brook on Friday, Sept. 24. The defense has now allowed 12 combined points through six games. (Reporter photo/Keith McCoy) 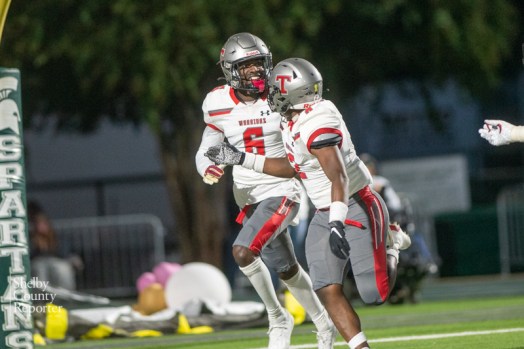 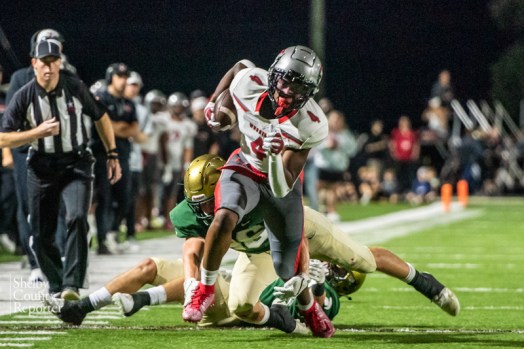 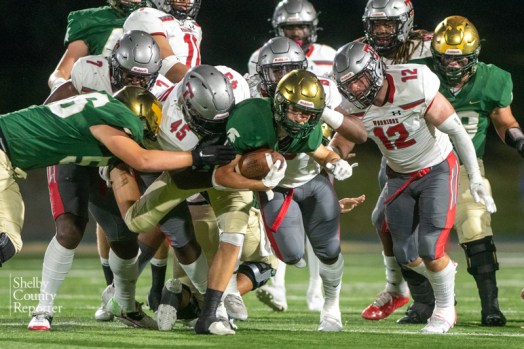 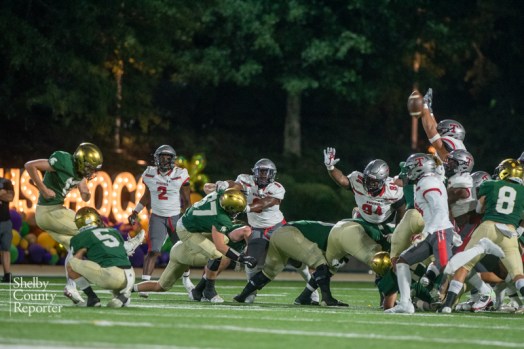 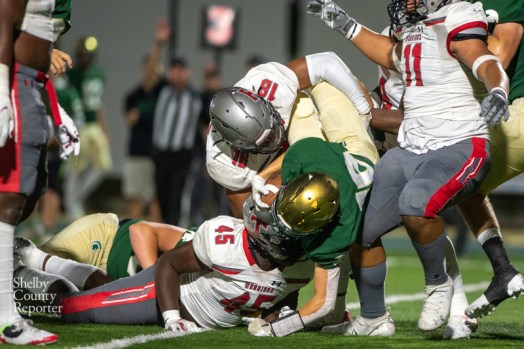 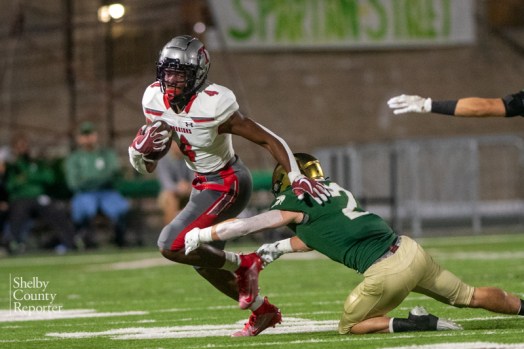 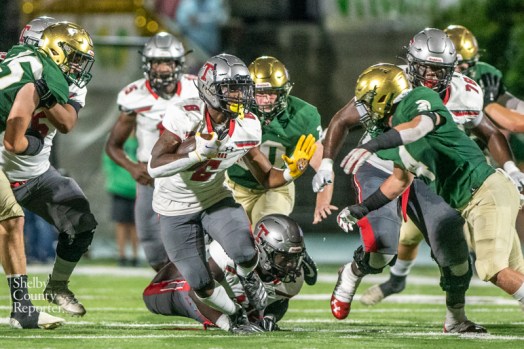 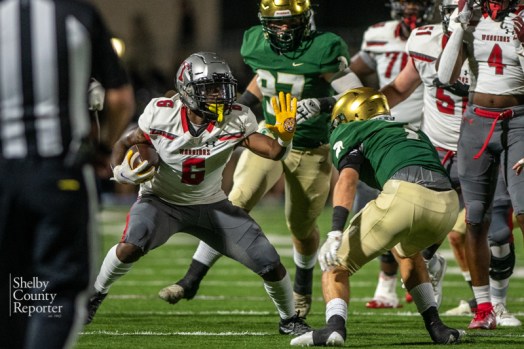 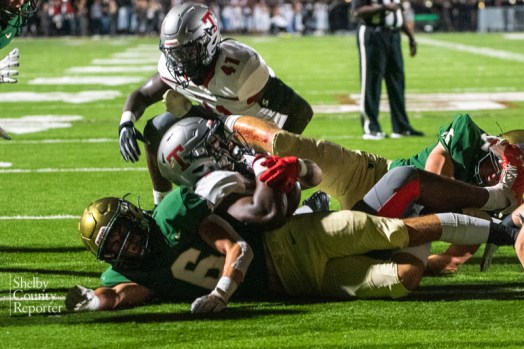 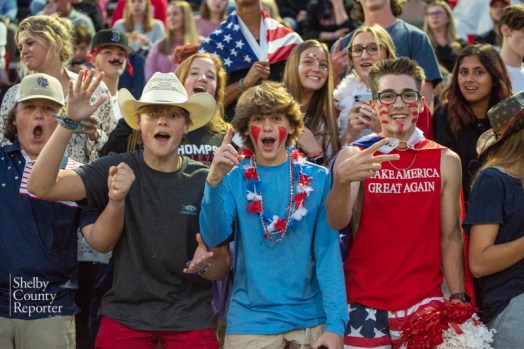 MOUNTAIN BROOK – The Thompson Warriors spoiled Mountain Brook’s homecoming on Friday, Sept. 24 with an overwhelming 51-0 victory against the Spartans.

The shutout was Thompson’s fourth of the season already, as the Warriors have now outscored opponents 310-12 on the season.

But it wasn’t always a sure thing.

Mountain Brook came out swinging with some pre-snap changes at the line causing the Warriors to jump offside twice to the delight of the Spartans fans in the opening quarter.

However, all that went out the window as John Colvin’s first pass was intercepted by Tre’Quon Fegans, who returned the ball all the way for the only points of the first quarter.

The Spartans’ defense came into the matchup allowing the second fewest points in the state next to Thompson and stumped the Warriors on their first offensive drive with a three-and-out.

The ensuing punt traveled just 20 yards downfield to give Mountain Brook its best field position of the night at the Thompson 30-yard line. Unable to convert on third down, the Spartans opted for a 41-yard field goal, but their only chance at points were blocked by the Warriors’ special teams to end the threat.

The teams traded three-and-outs once more, then Thompson got a little momentum.

Traveling into Spartans’ territory, it looked as if the Warriors offense might finally get on the board, but a nose tackle dropped into coverage for Mounting Brook catching Conner Harrell by surprise and snagging the interception across the middle of the field.

The Spartans were elated, but were promptly deflated as Thompson forced another three-and-out. With a few bizarre drives behind them, the Warriors’ offense got to work in the trenches.

Mark Freeman used a steady diet of Brandon Franklin, Ahmari Bolden and a rejuvenated offensive line to churn up 43 yards on a 59-yard, 11-play drive to settle everyone down with a 14-0 advantage.

From there, the Mountain Brook’s offense continued to struggle, now facing a two-score deficit.

Thompson’s defense piled up seven tackles for loss in the first half, including two big tackles and an 11-yard sack from Peter Woods.

The final stop of the half gave Thompson the ball with 1:30 to go and, of course, it proved to be too much time.

Seven plays later, Harrell, who ran for 40 yards in the win, scampered into the end zone from 5 yards out to give the Warriors a 21-0 halftime lead.

It was nothing but Thompson the rest of the way.

The Spartans, who only came away with 25 yards before the break, mustered just 41 after that.

The Warriors, on the other hand, did just the opposite.

After an uncharacteristic 157 first-half yards, they opened the floodgates for 348 in the second half with five total touchdowns.

Harrell found his rhythm in the second half and got it going, escaping pressure and throwing a beautiful touch pass to Justin Pegues, who drifted up the left sideline behind the coverage and sped past the rest of the secondary on an 89-yard touchdown reception.

It was Pegues’ best night of the season as he used four chunk receptions to total 145 yards and added 41 more on two rushes.

Harrell also found Jaylen Ward for his final touchdown pass of the night to finish 15-of-24 for 216 yards and two touchdowns.

The Warriors’ offensive line outdid themselves as six different Warriors ran for 40 yards or more. Bolden and AJ Green led Thompson with 52 yards each, as Green added the final touchdown.

Franklin and Lione Cook ran for 49 yards each with Franklin scoring two touchdowns, including an emphatic 13-yard score that rubber stamped another dominant night for Thompson.

Woods led the defense with six tackles, two for loss and a sack, while Jeremiah Alexander added six more and a tackle for loss.

Fegans’ interception was the 11th of his career and the seventh time he’s returned one for a touchdown. It was also his second touchdown of the year, as he holds Thompson’s lone kickoff return for a touchdown.

A’mon Lane also picked off a pass in the second half for his first career interception.

Thompson (6-0, 3-0) will stay on the road next week and resume their region schedule at Vestavia Hills Friday, October 1 at 7 p.m.