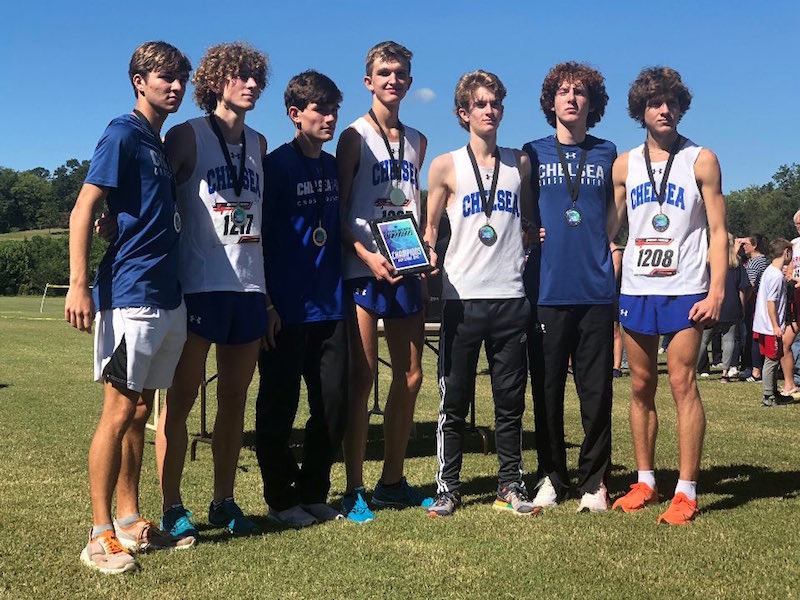 The Chelsea boys cross country team finished first in the Shelby County Championship, while the girls also finished inside the top three with Cady McPhail winning the race. (Contributed)

MONTEVALLO – Two Chelsea runners shined on the big stage on Saturday, Sept. 25 in Montevallo during the Shelby County Championship, which brought together the top cross country runners from across the county.

At the end of the event, Miles Brush and Cady McPhail stood tall as the winners of both the boys and girls races to continue strong starts to the season and build off last year’s success.

Brush not only won the boys race, but beat the next closest opponent by almost a whole minute.

The senior for the Hornets finished the race in 15:27.48 to take the top spot, which now gives him two finishes inside the top six this season with this time actually being 16 seconds slower than his sixth-place finish at the Southern Showcase.

McPhail also put together her second fastest time of the season and put together a dominant showing. The junior for the Hornets finished atop the standings after running the race in 19:11.47, which was more than 45 seconds faster than second place.

In the boys race, Brush was one of three Chelsea runners to finish inside the top 10 of the standings, which helped the Hornets claim the top spot in the race as a team.

Thompson’s Jackson Hamlin finished second in the race to close out the top three. Hamlin continued a strong season thanks to a time of 16:22.26, which helped the Warriors take second as a team.

Just two spots behind him in fourth was teammate Cameron Prosser, who finished with a time of 16:37.15, while sophomore Matthew Hamlin added a third runner in the top 10 for Thompson with a finish of seventh thanks to a time of 17:02.13.

In the team standings, Oak Mountain took third while Helena, Briarwood, Pelham, Calera and Shelby County finished behind the Eagles in that order.

Chelsea’s Tucker Brown, Camden Thomas and Luke Price all finished inside the top 20 to help solidify the team win, while Thompson had two more runners in the top 20 thanks to Reid Tindell and Aden Carter.

Calera added one finisher inside the top 25 with Cade Galloway finishing 24th thanks to a time of 17:49.17.

Shelby County’s highest finisher was Gabriel Arias in 91st behind a time of 21:32.91.

In the girls race, it was the Oak Mountain Eagles who were able to walk away with the team victory thanks to five finishers inside the top 15 and two inside the top five.

Indian Springs’ Elise Picard finished second in the race to close out the top three. The junior claimed the top-two finish thanks to a time of 19:57.83, making her one of two to finish the race in less than 20 minutes.

Helena’s Mallory Barton was one of many highlights for the Huskies, who finished second in the team standings two points ahead of Chelsea.

Pelham and Thompson each had representation inside the top 10 as well.