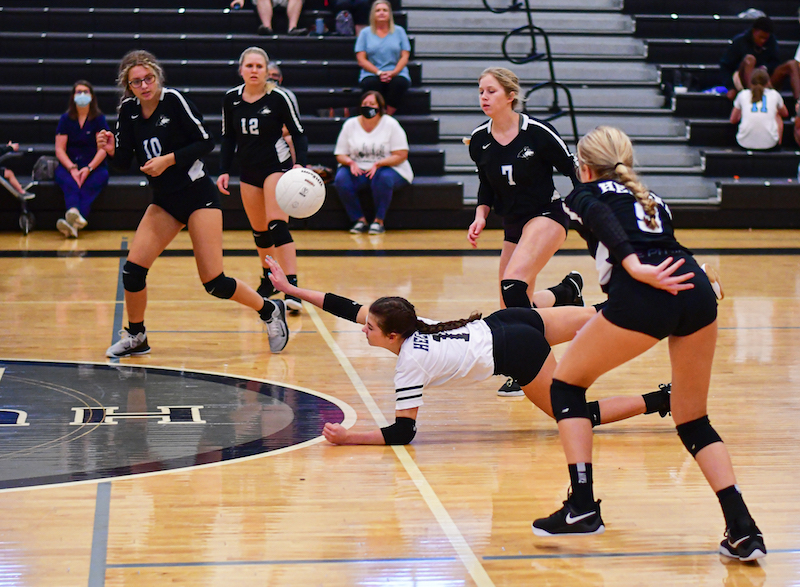 Helena’s volleyball team put together another big area win against Chilton County on Sept. 23, while the Huskies also competed against some of the state’s best talent at the Heffstrong Tournament. (For the Reporter/Jeremy Raines)

HOOVER – The Helena Huskies entered the 2021 volleyball season as young and inexperienced at the varsity level as possibly anyone in the state, but the Huskies have taken that with a grain of salt and gone toe-to-toe with some of the best teams regardless.

That was no different during the week of Sept. 20 in which the Huskies not only had two big matches during the week, but also played in the difficult Heffstrong Tournament on Friday and Saturday.

Helena opened the week with a tough matchup against Northridge, one of the top teams in Class 6A, on Tuesday, Sept. 21.

The opening set was the storyline of the match with 58 total points played.

After battling to a 25-25 tie, neither team could create separation, which eventually led to a 28-28 tie.

That’s when Northridge was able to make the difference with two consecutive points won to take the set 30-28.

Northridge went on to close out the match one set later with a 25-21 win, but the Huskies battled throughout.

Two days later, Helena bounced back with a straight-set victory against Chilton County to improve to 3-1 in area play.

In the big win, Graydon led the way with 11 kills and four aces, while Addison Hines had six blocks and Lively had 24 digs.

That gave the Huskies some confidence going into the Heffstrong Tournament at the Finley Center in Hoover.

A tournament featuring some of the best teams in the state, the Huskies had to open pool play with matches against Class 5A No. 1 Bayside Academy and a strong out-of-state opponent Summit (Tennessee).

The Huskies lost to Bayside in straight sets to kick off the tournament with Dockery leading the way with four kills and Lively totaling 11 digs.

Helena, however, bounced back quickly with a win against Summit. The Huskies picked up the win behind eight kills from Graydon and 32 digs from Lively. Kayla Terrell added four kills in the victory.

That led into a difficult Saturday for the Huskies, who had to take on No. 9 Jasper, Shades Valley and Fairhope.

Against Jasper, Helena dropped the opening set 25-20 to fall into a 1-0 hole. The Huskies bounced back quickly with a 25-20 win in the second set to even the match, but they couldn’t replicate the success in the third set with Jasper finishing off the match with a 15-8 win.

Following that loss, Helena bounced back quickly with a win against Shades Valley to remain alive in the tournament thanks to another consistent effort from Dockery with three kills, five aces and two blocks.

Helena then got a crack at Fairhope, but the Huskies couldn’t find a rhythm and dropped the match to end the tournament. Graydon, Hines and Dockery all had three kills in the loss.