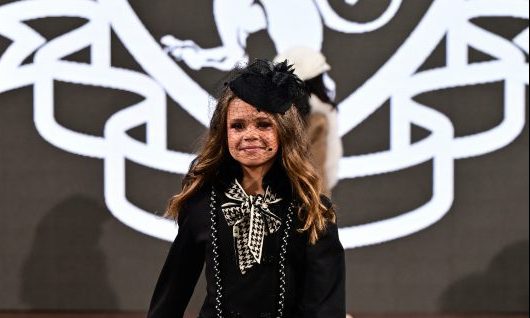 PELHAM – Pelham’s Aly Bevelle has your typical hobbies of a 9-year-old: She’s a Pelham Youth Cheerleader, loves to play outside and every year she models the latest fashions on the runway of New York Fashion Week.

While participating in an event this large may seem overwhelming to some, Aly’s mother, Ann, said Aly was a natural from the first time she took to the runway.

“I thought, ‘Oh my gosh, she’s just going to run off that stage, she’s going to hate this,’ and she killed it,” she said.

Aly’s modeling career began when her parents sent her to a casting call for kids when she was 4-years-old that Bevelle said they thought would result in a local modeling job. The casting call ended up being for New York’s annual Fashion Week, where some of the world’s top designers showcase their latest fashions. Since then, Aly has won awards for her modeling, and worn pieces by designers from all over the globe.

They do Fashion Week every year in September, and sometimes they take on other locations, depending on the offer.  In December they’re going to do a runway show in Nashville for animals, and they’ll be walking French bulldogs wearing matching outfits down the runway.

“She’s gone to L.A. as well,” Bevelle said. “Usually she works for a couple of designers. Each time she goes she gets to do two or three shows. This year was a little different with COVID, so we didn’t do quite as many, but it was still a great trip. She just really enjoys it.”

Bevelle said the runway is Aly’s passion, and she has seen a complete change in her daughter’s confidence since she began modeling.

“It’s definitely helped gain her confidence. She’s very outgoing, she never meets a stranger,” she said. “She’s just like a whole other person. Once she hits that runway, she’s in her zone.”

If she had to pick her favorite thing about modeling, Aly would definitely say being able to see the new fashions, according to her mother.

“She loves being able to see the latest styles and what’s out there,” she said. “Also, it’s an adventure. She loves seeing what’s going on in the world and what’s important and being able to make friends and have fun.”

When she isn’t modeling, Aly attends Pelham Oaks Elementary School, and her mother said she “wants to be an everyday kid.”

“I always let her make the decision,” Bevelle said. “If I’m like, ‘Okay, so-and-so wants you to wear their designs,’ it’s totally up to her. We missed out on an Italy trip one time because she didn’t want to miss camp. If she decided to stop tomorrow, I would be okay with it.”

Bevelle said it’s important to her that Aly have as normal a life as possible, and they work hard to balance her modeling and at-home life.

“Usually, with her schedule, I kind of know about shows and photoshoots in advance, so that allows us time to plan,” Bevelle said. “We talk to her teachers and they give us her schoolwork for her to do, and she does all of that on the side so she doesn’t get behind.”

Bevelle said she’s proud of her daughter’s conviction and dedication, and knows she is destined for a great future.

“She wants to be a model and also a traveling nurse when she grows up,” she said. “She’s going to do great things regardless of what she does.”