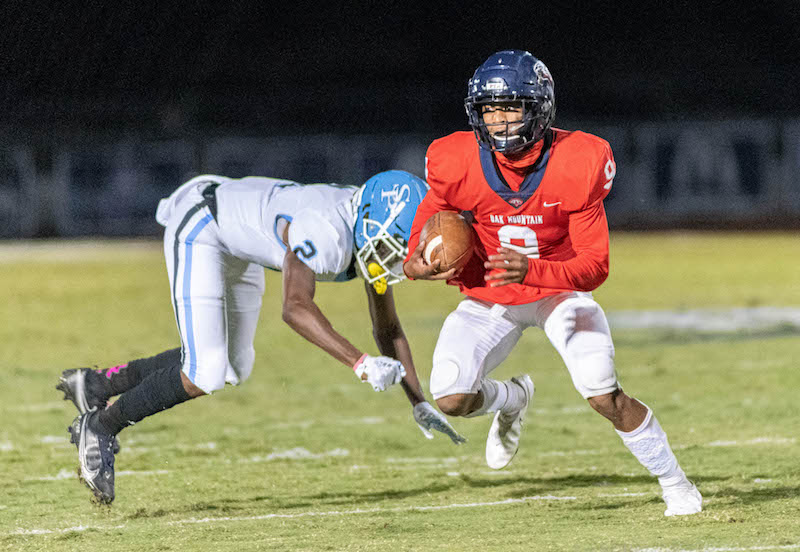 Oak Mountain will travel to Spain Park this Thursday for the Game of the Week. (File)

We are now heading into the homeward stretch. The first half of the season is behind us, and the second half kicks off this week with teams jumping back into region play.

There are still three undefeated teams this season, while several others are above .500 and every team still has at least a decent chance of advancing to the playoffs.

It should make for an exciting finish to the season, and it starts this week with several crucial region games.

Spain Park vs. Oak Mountain (Game of the Week, Thursday)

It is a big rivalry week for these two teams, and it happens in a Thursday-night battle. Oak Mountain enters the game 4-1 with its lone loss coming to No. 2 Hoover by seven points in the team’s last outing. Spain Park is now on the opposite end from the Eagles at 1-4 this season. Both will be looking to use this as a momentum boost to get the second half of region play underway with the possibility of chasing down a playoff spot. Oak Mountain is scoring 25.8 points per game so far, but most impressively, the defense is giving up 13.6 points per game. Spain Park is struggling to score points at 18.4 per game, while the Jags are giving up 34.2 per game. The Eagles have also outscored opponents 92-13 in the second half of games this year, while the Jags have struggled to close out games with chances in three of their four losses. Spain Park cold play its best game of the season and win, and I do think this will be tight at the half, but the Eagles should have a chance yet again to pull away in the second half. Spain Park 14, Oak Mountain 28

Thompson has cemented itself as the clear No. 1 team this season with back-to-back wins against top-10 teams in Class 7A and 6A. Coming off a 51-0 win against Mountain Brook, the Warriors are now 6-0 and have outscored opponents 310-12 this season. They have yet to give up double digits in any game, have four shutouts and are giving up just two points per game defensively. The offense has been equally as impressive, scoring 51.7 points per game with 51 or more in four of six games and 42 or more in every game. Thompson now hits the road for the second week in a row for a matchup against a 1-4 Vestavia Hills team that has scored 14 or less in four of five games. Thompson’s defense could post its fifth shutout of the week this season going off of those statistics, but this is also a Vestavia team that will continue to improve as the season goes along. Thompson 42, Vestavia Hills 7

The Helena Huskies have quickly made themselves a contender in the 6A classification with huge wins the last two weeks by three points against Pelham and in double overtime against No. 6 McAdory. The Huskies are now 6-0 and should have a strong chance at finishing off a perfect season if they continue to go one week at a time. This week, they’ll get a Chilton County team sitting at 2-3 on the season. The Tigers are only scoring 16.2 points per game, and despite giving up 34 and 35 the last two weeks, the Helena defense is giving up just 15.5 points per game. As long as the Huskies continue to shift their focus to the next week, they’ll be fine the rest of the way, and that starts this week. Helena 35, Chilton County 10

It hasn’t been quite as smooth the last few weeks for Briarwood, but the Lions have still taken care of business to get to 6-0. Last week, the Lions took a big early lead against Mortimer Jordan before the Blue Devils attempted a comeback. At the end of the day, however, Briarwood’s offense has just been too difficult to stop. The Lions have scored 38 or more in every game and are averaging 41.2 points per game. Defensively has been a big more of a tossup at times, going from dominant to inconsistent. That said, the Lions are out to make a statement on that side of the ball against a Shades Valley team that is 1-4 and scoring just 8.2 points per game. Outside of a win against Huffman, the Mounties have been shutout in their other four games. They have played one of the state’s most challenging schedules, but Briarwood is another one of those difficult opponents. Taking on a defense giving up 34.6 points per game, expect the Lions to get near 40 points yet again. Briarwood 38, Shades Valley 20

It has been a special run for the Calera Eagles thus far under first-year head coach Jason Hamlin. The Eagles have won three head-to-head games this season after only winning one the previous three seasons. Now at 2-1 in region play, they have a big stretch ahead, at least needing to go 2-2 through the next four games to make the playoffs. One of the biggest matchups will come this Friday on the road at Stanhope-Elmore in a game featuring two very similar teams. Stanhope is scoring 25 points per game and giving up 16, while Calera is scoring 29.2 per game giving up 23. The defense is going to have to play well in the second half of this game to help the Eagles pick up a win, but Calera’s offense has taken major strides and should be a major factor. Led by Preston Stokes, Kobe Prentice and Braylyn Farrington, they are coming off a 56-point performance against Pell City. If those three continue to play well and running backs continue making plays, the Eagles will be in good shape. It is imperative, however, that they get off to a fast start similar to last week. Calera 28, Stanhope Elmore 24

It has been a heartbreaking two weeks for the Pelham Panthers. With two consecutive three-point losses to Helena and Chelsea, the Panthers have a crucial game against Wetumpka this week. If the Panthers want to earn home field advantage in the playoffs, this is the toughest obstacle left standing in the way. That should be more than enough to help Pelham forget about the last two weeks and be more than ready for this game. Will it be enough is the question though. Wetumpka is 3-3 so far averaging 17.2 points per game and giving up 17.8 points per game. The Indians have scored 28 or less in every game, but the defense has given up 20 or less in every game. Pelham, also 3-3, is scoring 25.3 points per game, while the Panthers are giving up 23 points per game. This should be a tightly-contested game, but Pelham’s offense has experience and that has to be what makes the difference. The Panthers will need to start fast because falling behind early won’t be easy to overcome against this defense. Pelham 21, Wetumpka 17

The Chelsea Hornets are finally in the win column after taking down Pelham 31-28 last week. Chelsea finally got over the hump following three consecutive close losses in a row. Now at 1-4 on the season, the Hornets are taking on a 1-5 Woodlawn team that is scoring just 14.2 points per game and giving up 39.5 points per game. While Chelsea’s defense has struggled at times, giving up 36 points per game, the offense should be able to name its score this week, which will make a difference. Chelsea 42, Woodlawn 21

The Shelby County Wildcats have hit a difficult two-week stretch, but now they find themselves in a big matchup against Central-Tuscaloosa. The Wildcats can earn the two seed and home field advantage in the playoffs with wins in the rest of their region games, which is very likely, but one of the most difficult tests will come this week. They hit the road to take on a Central team that is 2-3 and scoring 21.2 points per game. The biggest factor, however, could be Central’s defense against Shelby County’s offense. Central is giving up just 14.8 points per game, while the Wildcats have struggled to score lately. They have scored just seven points the last two weeks and have been outscored 74-7 in that span. Shelby County is now scoring 15.4 points per game and giving up 29. I do think the Wildcats’ defense can make the game close and give them a chance, but the offense will have to be ready to go to pick up the win. Shelby County 14, Central-Tuscaloosa 20

The Montevallo Bulldogs have possibly their biggest regular-season game of the year left this Friday against West Blocton. Sitting at 3-2 overall, the Bulldogs have played their two toughest opponents, but West Blocton provides a stiff test as well at 5-0. Montevallo won last year’s game 29-28, and this year’s should be a tough battle as well. West Blocton is scoring 48 points per game and giving up 21 points per game. Montevallo is battle tested and the defense is playing much better this year than last season, while the offense is playing well behind Joseph Anderson. It is a team that also continues to get better on the offensive side. This one won’t be an easy task, but it seems like the Bulldogs are primed for a big week coming off a bye and a dominant win the week before. Montevallo 34, West Blocton 28

The Vincent Yellow Jackets are now 4-1 on the season, but they are hitting their most difficult stretch of the schedule. It starts this week with a matchup against 4-2 Lanett, who is one of the best teams in Class 2A and the favorite to win the region championship. Lanett has given up 21 or less in every game for an average of 14.7, while the offense has scored 44 or more in three of six for an average of 34 points per game. The Jackets are playing well defensively and have scored 35 or more in four straight, but Lanett provides a different challenge. Vincent 13, Lanett 34

Evangel has started to hit its stride at the perfect time. In the meat of their schedule against in-state and conference foes, the Lightning are taking on rival Ezekiel off their two best performances of the season. Now 6-1, Evangel handed Freedom Academy its first loss two weeks ago and beat Lighthouse 44-12 last week. Ezekiel lost to both of those teams, while Evangel picked up dominant wins. Evangel 48, Ezekiel 20