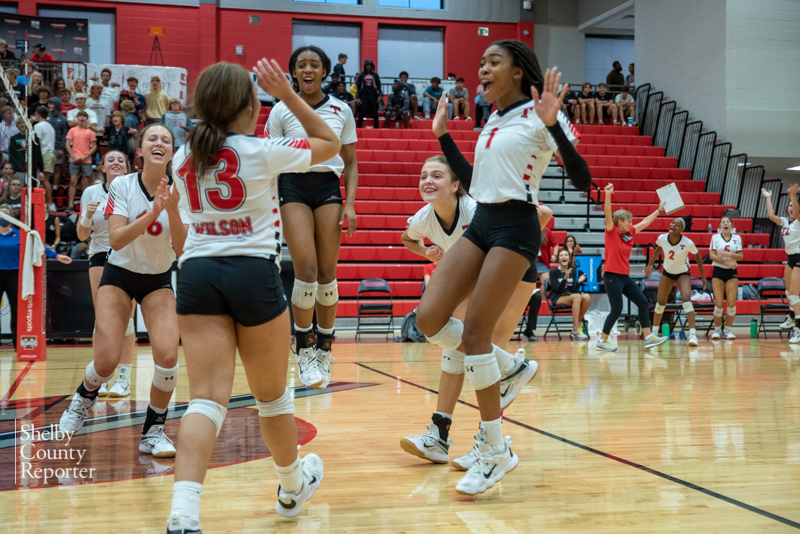 HOOVER – The Thompson Warriors have quickly turned into one of the hottest teams in the state, and despite coming up short of winning the Heffstorng Tournament at the Finley Center in Hoover Sept. 24-25, the Warriors continued their impressive stretch.

After beating the Spain Park Jaguars 3-2 on Sept. 14 to take over the top spot in the Class 7A standings, the Warriors went on to beat Class 4A No. 1 Montgomery Academy 3-1 in their next match before heading to the Heffstrong.

Thompson then won its first three matches of the tournament before ultimately falling to Vestavia Hills two matches shy of the championship.

With the impressive showing, the Warriors improved to 18-6 on the season and picked up two more big wins.

After sweeping Calera in the opener on Friday night, Thompson came back the next morning and put together another dominant effort against John Carrol.

The Warriors gained all the confidence they needed in a 25-15 first-set win to grab the early advantage.

The Cavaliers, who have been a young but strong team in Class 6A, bounced back to make the second set interesting, but it wasn’t enough. Thompson eventually gained set point and capitalized with a 25-23 victory to pick up their second sweep in a row to start the tournament.

That led to the match of the tournament for the Warriors, and one of the best comebacks of the season.

Taking on Class 7A No. 10 Grissom, the Warriors found themselves in a battle after the two teams split the opening set. That led to a third-set tiebreak, which it looked like Grissom was easily going to win.

The Tigers took a 14-9 advantage in the set, putting them one point away from advancing and ending Thompson’s tournament.

In stepped Hannah Fincher. She went to the service line and helped Thompson pull off a remarkable comeback with seven consecutive points won to kill off five match points and eventually win the set 16-14 and the match 2-1.

Thompson’s luck ran out against Vestavia Hills in the next match, losing another tough three-setter to the No. 7 Rebels.