Oak Mountain takes down 6A No. 9 Jasper in 5-set thriller 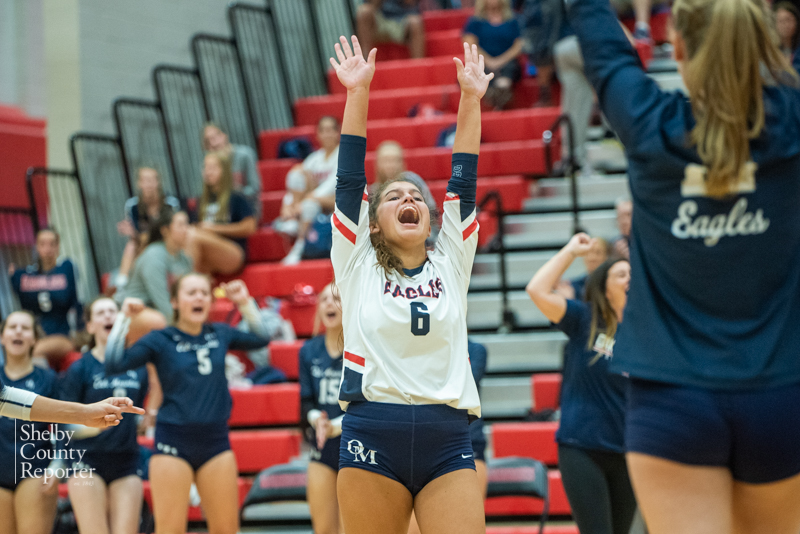 The Oak Mountain Eagles picked up a big win against Class 6A No. 9 Jasper on Tuesday, Sept. 28 thanks to a thrilling finish in the fifth set. (Reporter photo/Keith McCoy)

NORTH SHELBY – The Oak Mountain volleyball team seems to be hitting its stride at the right time of the season, and that was no more evident than in a win on Tuesday night, Sept. 28.

Taking on Class 6A No. 9 Jasper, the Eagles, who are No. 8 in Class 7A, found a way to pull off a thrilling five-set victory against the Vikings.

Oak Mountain fell behind quickly in the opening set and couldn’t make up enough ground, which led to Jasper pulling away for a 25-19 win for a 1-0 advantage.

But that seemed to wake up the Eagles, who flipped a switch and responded with a dominant two sets after the opening-set loss.

In the second set, Oak Mountain put together its most dominant stretch of play during the night en route to a 25-17 victory to quickly even the match at 1-1.

The Eagles used that swing in momentum to boost their confidence in the third set, which led to another impressive performance. While it was a tighter set, Oak Mountain’s confidence late in the set was evident, as the Eagles pulled away for their second win in a row by a score of 25-21.

Now, all of a sudden, Oak Mountain had taken a 2-1 lead and overcome the 1-0 hole it faced earlier in the match.

But Jasper responded in clutch fashion.

The Vikings flipped a switch knowing they needed a big win in the fourth set to force a fifth-set tiebreaker. They not only won the fourth set, but did so in convincing fashion behind a score of 25-17 to stay alive.

Going into a decisive tiebreaker set, it seemed like that strong win by Jasper may give the Vikings the boost to win in the final set.

Oak Mountain, however, had other plans.

In a down-to-the-wire battle, the Eagles quickly flipped the switch back to the on position and gained a 14-13 advantage. On the ensuing point, they closed out the set for a 15-13 victory to bring an end to an exciting matchup.