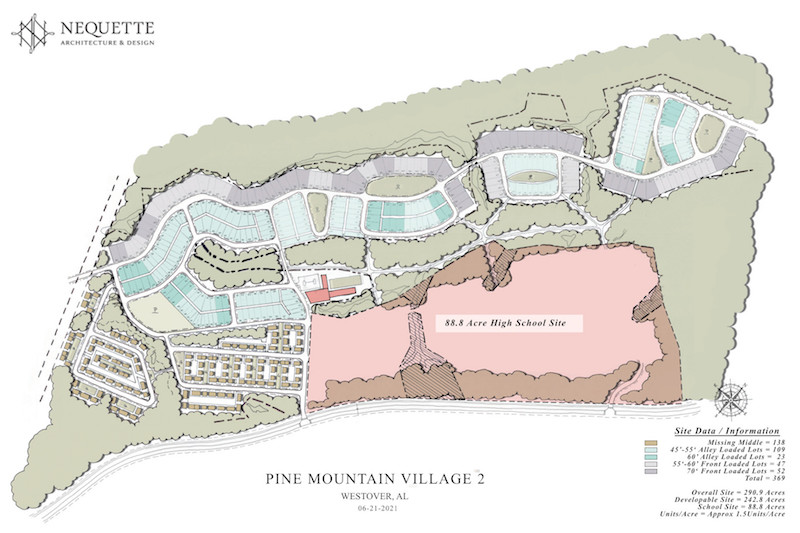 The Westover City Planning Commission approved for a piece of property in the new Pine Mountain Preserve development to be designated as a potential site for a future school. (Contributed)

By FRANKIE OSBORN | Special to the Reporter

WESTOVER – On Tuesday, Sept. 28, at the regularly scheduled Westover City Planning Commission meeting, the main topic of discussion was schools.

With the recent news of Chelsea proposing to form its own city school system, Westover has begun to make preparations to be ready for future growth, whether it will be city or county schools.

Present at the meeting were Doug Eddleman and his assistants with Eddleman Properties, the developer for Pine Mountain Preserve.

Eddleman made a public statement to residents regarding his efforts to encourage growth in the Westover area.

One of the ways he intends to pursue this is to designate two possible sites for future schools, the most recent being an 88-acre piece of land in Village 2 of the master plan labeled as a potential high school site.

This acreage, if used for a high school, would be among the largest campuses in Shelby County.

The site is located on the main parkway of the project and would be seen by all traffic going through the subdivision.

The property is almost directly on the line between Chelsea and Westover.

There was much discussion in the meeting about the importance of schools when it comes to growth.

When a consumer is contemplating moving to the area and building a new home, one of the most common questions is, “What school is this area zoned for?”

Right now, it is still a question that cannot be answered for those who will be in the new Pine Mountain Preserve subdivision.

Eddleman indicated the proposed locations and possibility of new schools would be a desirable incentive to build and to live in the subdivision.

“It’s a win-win solution for the community and also for the development,” he said.

The three options for schools is called an overlay, meaning the property can be used for schools, but in the event it’s not, then the property would revert back to the original plan for housing.

That way, it is not left as “unknown” to adjoining home buyers when they want to know what the plan is for the area in their back yard.

The options are not specifically designated for elementary, middle or high schools, but are just being approved for school site options as needed.

Eddleman said he has been in the business for 43 years and has worked with the Board of Education on other sites, adding he is hopeful the new school or schools will be in Pine Mountain Preserve.

The Planning Commission proposed a new resolution to accept the 88-acre piece of land in Pine Mountain Preserve – Village 2 as an overlay for use as future school property.

The motion was made by Robin Smith and seconded by Larry Riggins, and a unanimous vote by the commission followed.