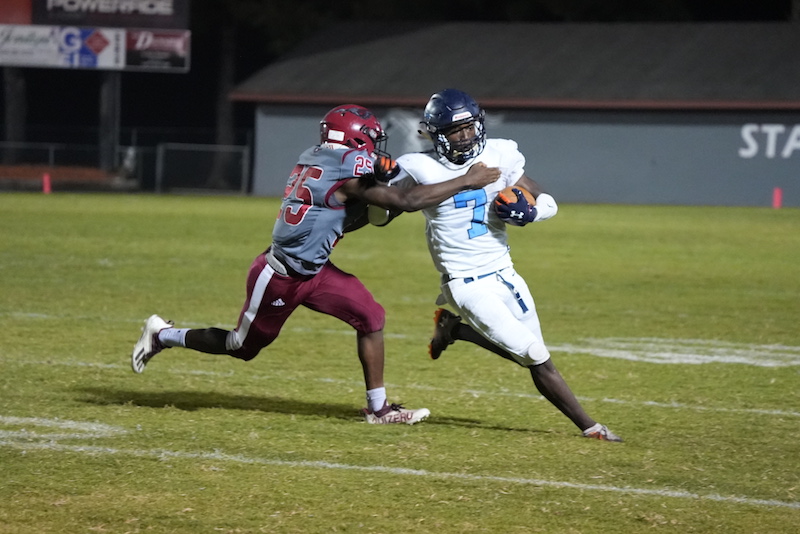 The Calera Eagles picked up their fourth win of the season on Oct. 1 thanks to a 20-3 victory against Stanhope Elmore. (Contributed)

By ANDY ANDERS | Special to the Reporter

MILLBROOK – The Calera Eagles continued an already special season on Friday, Oct. 1 with a road win against Stanhope Elmore.

The Eagles stood tall defensively, giving up just three points, while the offense took advantage of three touchdown passes from Preston Stokes—two to Braylyn Farrington and one to Kobe Prentice—to pick up a 20-3 victory.

Two fourth-quarter touchdowns for the Eagles sealed the win to help the Eagles improve to 4-2 on the season and 2-1 in region play.

“It was a hard fought game. Hats off to Calera, they did a good job,” Stanhope coach Brian Bradford said. “Thought the kids played hard. We just made some mistakes from all different sides. Moved the football fine, didn’t score touchdowns in the red zone and that was the difference in the game.”

Things were looking up for the Mustangs at one point in the third quarter.

Calera had a 7-3 lead and the ball inside the red zone, facing a third-and-1. With its run game stymied all night, the Eagles elected to try a pass in the short-yardage situation.

Quarterback Preston Stokes dropped back to pass and was met with an emphatic collision, resulting in a strip sack. Stanhope defensive lineman Kameron Stokes dove on the fumble.

Feeling confident in his unit, defensive coordinator Hunter Adams gave a message to Stanhope’s offense when it faced a fourth-and-1 inside its own 30-yard-line the following drive.

Stanhope converted on a 2-yard wildcat run from running back Antonio Trone.

The tide turned in the opposite direction from there, however.

The Mustangs punted three plays later, then exchanged another set of punts with Calera thanks to a quarterback hit to force an incompletion from defensive end Caleb Foster.

Stokes then connected with Farrington on back-to-back plays, the latter a 38-yard strike deep downfield, setting up a 14-yard touchdown on a screen pass to wide receiver Kobe Prentice, extending the Eagles’ lead to 13-3 with 10:46 remaining.

Stanhope’s offense followed with a three-and-out, while the ensuing punt was returned to its 36-yard-line by Calera running back Chris Cotton.

From there, the Eagles went up 20-3 with less than seven minutes to play on a 26-yard touchdown pass from Stokes to Farrington.

An interception by Calera defensive back Wesley Head on the Mustangs’ next possession helped put the game on ice for the Eagles.

Cornerback Pat Williams grabbed an interception of his own on the ensuing Calera drive, but it stood as far too little, far too late.

The Mustangs’ lone score of the night came on a second quarter field goal after their offense drove into the Eagles’ red zone.

Stokes finished the game 17-of-26 for 217 yards and three touchdowns, while Prentice had 106 yards and a touchdown on nine catches and Farrington had 104 yards and two touchdowns on five catches.

Michael Banks led the Calera defense with 12 tackles, including two for loss, while Mason Green and Jeremiah Henderson both had seven.