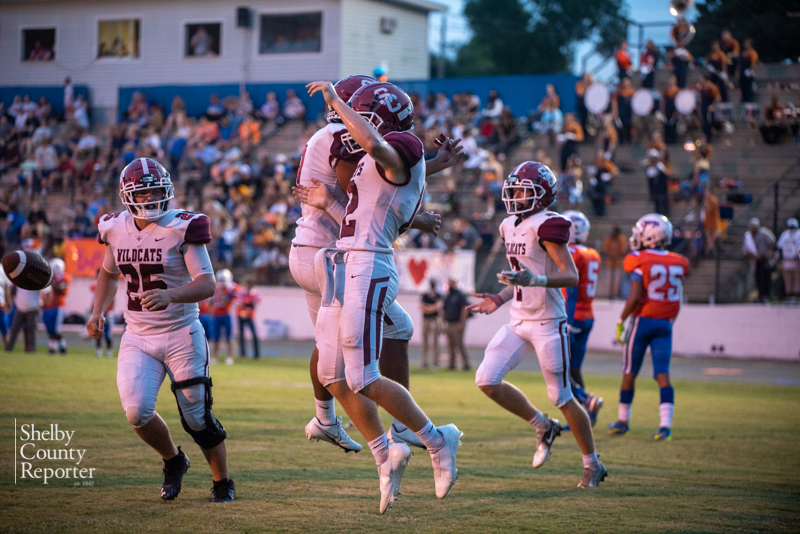 TUSCALOOSA – The Shelby County Wildcats were able to overcome an early second-half deficit thanks to 14 unanswered points in the final quarter against Central Tuscaloosa on Friday, Oct. 1 to pick up a 22-14 victory.

The Wildcats led a low-scoring defensive battle 8-6 at the half, but they were then forced to come from behind after the Falcons scored on their first drive of the second half and converted a 2-point attempt to take a 14-8 lead.

Shelby County, however, made two huge plays in the final four minutes when it looked like time might be running out.

With 3:38 remaining in the game, Jecoreyan Butler scooped up the ball off a forced fumble and carried it 45 yards into the end zone to tie the game 14-14. The Wildcats then regained the lead for the first time since the break by converting the PAT to make it 15-14.

Shelby County then quickly got the ball back one last time and drove back down to the goal line where Connor Aderholt put some insurance points on the board with a plunge from 1-yard out with 58.6 seconds left to complete the comeback victory.

Aderholt also helped put Shelby County’s first points of the game on the board.

After falling behind on a long run by Shunkeith Turner late in the opening quarter, the Wildcats responded to the 6-0 deficit quickly when Aderholt picked up his lone passing touchdown of the night.

They then converted a two-point attempt to take an 8-6 lead late in the opening quarter.

That score held going into the half, before the second-half fireworks took place.

Aderholt finished the game 10of-15 passing for 136 yards and a touchdown, while adding 37 yards and one touchdown on the ground as well.

Defensively, the Wildcats were led by Cooper Pennington with seven solo tackles.

Shelby County improved to 3-3 overall this season with the win, while the Wildcats are now 3-1 in region play ahead of a big region matchup with Marbury next Friday night.