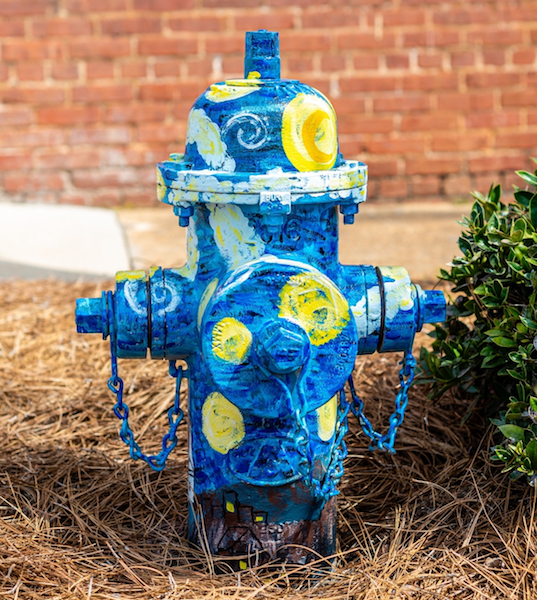 The artists chose different themes to reflect aspects of the Montevallo community, such as the bulldog mascot, first responders, local flora and fauna, and community assets including the Sister City, Tinglewood Festival James Wylie Shepherd Observatory.

The trail was originally created in 2007 to honor resident Dudley Pendleton and his canine sidekick, Pedro.

Longtime Montevallo resident Becky Cox-Rodgers, who manages Falcon Art Supply, spearheaded the trail’s renovation by recruiting community partners and artists to collaborate on repainting the hydrants, which were showing wear and tear a decade after they were first painted.

“Both citizens and visitors enjoyed seeing the hydrants and often commented about them,” Cox-Rodgers said. “Dudley’s wife, Emily, and their daughters realized that the hydrants were in need of a sprucing up and gave a very generous donation towards the revitalizing of the trail.”

The Pendleton Hydrant Parade was updated and rededicated this year in their memory through a partnership between Montevallo Main Street, Montevallo Water and Sewer Board, the Pendleton family, the city, Montevallo Fire and Rescue and the Montevallo Arts Collaborative.

Residents and visitors are invited to experience this public art feature.

The self-guided walking tour starts at Montevallo’s fire station located at 1140 Ashville Road and can be followed on the AllTrails app or via a printed map available at City Hall and the fire station.

For more information about the artists and hydrant themes, or to view the map brochure, visit Cityofmontevallo.com/PendletonHydrantTrail.aspx.

Mosaic Counseling and Wellness offers a safe space for…