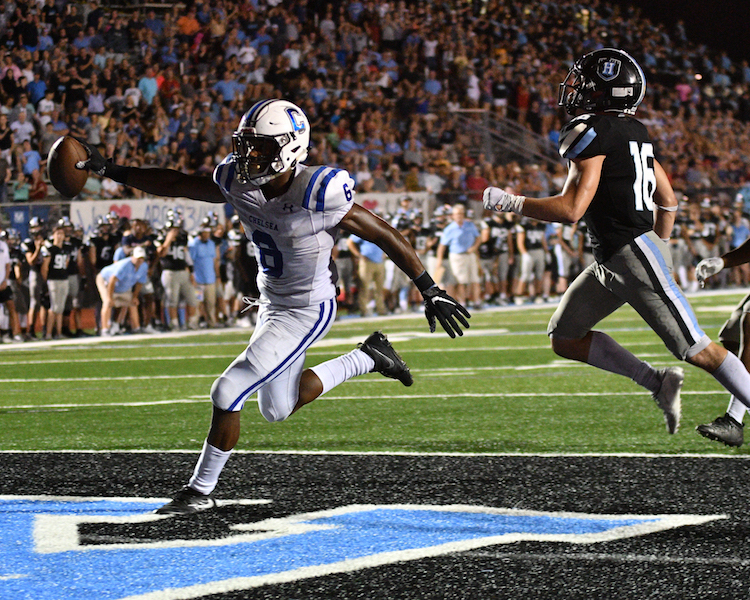 Michael Gibbs scores a touchdown against Helena in 2019. The former Chelsea standout's family announced on Sunday that Gibbs died at the age of 20. (File)

Playing a pick-up basketball game at the Chelsea Community Center in 2017, I kept wondering who this young buck was breaking everyone’s ankles.

At the time, I didn’t know who it was. All I knew was how mesmerized I was by his ability to slice through the lane and get to the basket against all these adults twice his size. In that moment, I said in my head ‘This kid is going to be special.”

Sure enough, a year later, I was covering a Chelsea basketball game when I found out who it was—Michael Gibbs.

Still a sophomore at that time, he suited up for the varsity team and started to showcase that same natural ability I had seen at the community center a few months earlier.

He was still raw and had a lot of growing to do, but he was just as special as I remembered.

That began not only a three-year stretch of Gibbs shining on the basketball court and football field, but also an impressive three years that shaped him into a remarkable student before he graduated in in 2020.

Sadly, on Sunday, Oct. 3, Gibbs’ family and church shared that he died at the young age of 20.

Ever since, it has become clear that Gibbs had the same impact he had on me with everyone else he crossed paths with.

Family, friends, coaches, members of the Chelsea community and former teammates have all shared what Gibbs meant to them, and one common message has been shared by each—he was humble, polite, a ball of energy and a hard worker.

That made me think back to that day at the community center. He was out there schooling all of us, yet after each made basket, he would turn around and run back to the other end of the floor to play defense. He didn’t hang around to showboat or relish in his success.

That is just who Michael Gibbs was.

So now, as we shift into life without him, that is what we hold onto.

He left this earth too early, but he made the most of his time. Not only leaving behind impressive athletic marks, but earning a 3.7 GPA in high school before attending the University of Alabama.

But most importantly, all of us who met him have a story of how he impacted our lives.

And that is what makes the biggest difference.

His legacy will live on through each of us, as we continue to share those stories and pass on some of his characteristics to others so they can live a life like him.

It is no coincidence that he was nicknamed Jubie, which means to carry yourself with swag.

Gibbs did just that, whether it be through his choice of fashion, the way he walked the halls or the way he carried himself both in the classroom and in sports.

Taking it a step further, it can be short for jubilant or jubilation, which is exactly how Gibbs lived every day—expressing his feeling of happiness and making the most of it.

I remember that day at the community center like it was yesterday because of the impression Gibbs left on me.

So while he left us too early, it is evident, he made a lifetime of impacts in his 20 years on earth that will continue to help his legacy live for years to come.