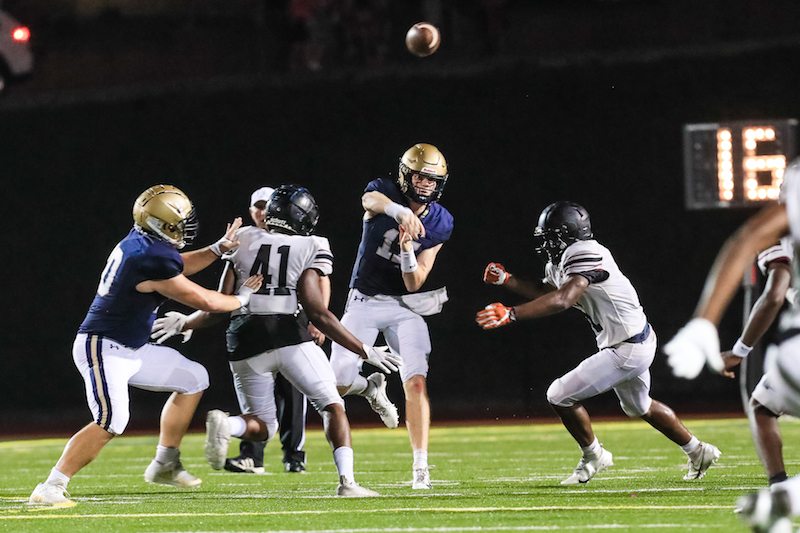 The season is flying by, and we are now down to just four weeks left in the regular season and only three in region play. With that, the importance each week is ramping up.

It is one of the most exciting positions the county has been in this late in the season after last year’s historic run of five teams making the second round of the postseason for the first time since 1997.

This week will likely start to clear up the playoff picture slightly with several big region matchups, including four Thursday night games.

Briarwood at Mountain Brook (Game of the Week: Thursday)

This one has been circled on the schedule for a while, but it was a game Briarwood head coach Matthew Forester didn’t mention to his team until last week. Now, the two undefeated region foes will square off looking to remain atop the region standings. Briarwood is coming off a 28-7 win against Shades Valley in which Christopher Vizzina had arguably his best game of the season with more than 300 all-purpose yards and four touchdowns. Mountain Brook will enter off a bye week following the team’s lone loss of the season in a 51-0 game against Thompson.

The Lions so far are averaging 39.3 points per game and giving up 17 points per game, while the Spartans are giving up 2.4 points per game and scoring 39.8 points per game not including the loss to Thompson. Both of these teams are physical groups who want to set the tone on the defensive side of the ball and on the ground offensively. The Lions could be without star running back Luke Reebals, but Vizzina seems to be ready to carry the load both running and passing with Jay Butler, Ethan Anderson and other receivers stepping up. Expect this one to be a low scoring game, and while Mountain Brook has had an extra week to rest up and get ready for this one, I think Vizzina and the offense can make a late play to win this one. Briarwood 21, Mountain Brook 17

Thompson has hands down been the state’s best team this season, and that shouldn’t change this week. The Warriors have outscored opponents 359-19 this season and have yet to give up more than nine points with four shutouts this season and only two touchdowns allowed. This week, they’ll get an improved Gadsden City team, but it’s a Titan’s offense that is scoring just 22.7 points per game. While the Titans are playing sound defensively at 17.6 points per game, they gave up 44 to Hoover in a 44-17 loss. Thompson is at the very least just as good as Hoover, but the Warriors have looked better than the Bucs this season. A team that has scored 49 or more in all but one game and 42 or more in every game, the offense should easily get back into the 40s this week, while the defense will be looking for its fifth shutout. Thompson 42, Gadsden City 7

On paper, this should be an easy week for Oak Mountain, but the Eagles can’t have a letdown game. Coming off a 35-7 win against Spain Park, they are now 5-1 overall this year. But with No. 1 Thompson the week after this and Hewitt-Trussville the week after that, they can’t get caught looking ahead to the battles ahead or the Wildcats will make them pay. That said, if Oak Mountain’s focus is there this week, the Eagles shouldn’t have any trouble. Their defense is  the best it has been in years now giving up just 12.5 points per game, while Tuscaloosa County is struggling to put up points at 15.3 points per game. The Wildcats are also giving up 40 points per game this season. That doesn’t bode well when you’re going up against one of the state’s best players and an offense that is getting better each week. Look for Oak Mountain to put together one of its best games of the season. Oak Mountain 35, Tuscaloosa County 13

These two cross-town rivals are set for another showdown this Friday, but they enter on opposite ends of the spectrum. The Jaguars have lost five straight games and are now 1-5 on the season, while Hoover remains undefeated as the No. 2 team in Class 7A. Spain Park is struggling to score points right now at 16.5 points per game on offense, while Hoover is only giving up 13 points per game and scoring 35.4 points per game on the offensive end. With Spain Park giving up almost that exact same number, it’s tough to see this one being close unless the Jags find a way to do something that hasn’t been shown so far this season. Spain Park 14, Hoover 42

What a huge Thursday night game this has turned into. The Calera Eagles are in the midst of their best stretch of play since 2017 with three consecutive wins, while the Helena Huskies enter this game off three emotional wins in a row. The Eagles, who are now 4-2 overall and 2-1 in region play, can create chaos with an upset in this game. Helena enters undefeated of three heart-pounding wins in a row. The Huskies downed Pelham by three points, beat McAdory in double overtime by six and were tested down to the wire in a 48-40 win against Chilton County last week that probably should have gone to overtime.

Jordan Washington has quickly turned into one of the state’s best backs and will be a force for Helena’s offense this week, but Helena’s defense has given up 34, 35 and 40 the last three weeks. That’s not a great sign going up against a Calera offense that has been playing great football led by Preston Stokes, Kobe Prentice and Braylyn Farrington. In addition to that, the Eagles are starting to play their best defensively. That said, the Huskies know last week was a lackluster performance, which should mean the focus this week is all in, while Washington on offense should be the difference in wearing down Calera in a very tight battle yet again. Had Helena won in a blowout last week, this game may actually have been a little trickier. Helena 31, Calera 21

Entering on a two-game win streak, this is another big matchup for the Chelsea Hornets. In control of their own destiny for a playoff spot following  0-4 start, Chelsea knows what is at stake each week, and the offense is playing like it. The Hornets are averaging 29.3 points per game and have scored 31 or more in four straight games. Competing against some of the best teams in the state, they had chances to win three of their first four in the final quarter despite ultimately losing. This week, Chelsea gets a Huffman team that has lost six straight games, giving up 41 or more in each of those games. Expect the offense of the Hornets to continue to play well and make the difference in this one. Chelsea 35, Huffman 20

Coming off one of their best showings of the season in a 41-14 win against Wetumpka, Pelham should have plenty of confidence heading into this Thursday night matchup. The Panthers forced several turnovers last week on the defensive side, and the offense capitalized. There were still some inconsistencies on the offensive side of the ball, but they ultimately settled in and pulled away. This week, they get a 1-5 Benjamin Russell team on the road that is only scoring 17.5 points per game and is giving up 31.3 points per game. Coming off their best defensive performance of the season, the Pelham defense is now giving up 21.7 points per game, while the offense is starting to perform up to its talent level with Gabe Gamble and Will Lankford both starting to click. This is a very good Pelham team that has lost some close games, but last week seemed to turn a page for this team, and I think that carries into this game. Pelham 34, Benjamin Russell 14

It is another huge week for the Shelby County Wildcats. Coming off a thrilling 22-14 win against Central-Tuscaloosa, the Wildcats can not only lock up a playoff spot this Friday, but they likely will lock up the two seed and home field advantage in the first round of the postseason. Taking on a 3-4 Marbury team that is only giving up 18.7 points per game and is scoring 18.3 points per game, it won’t be an easy task. Shelby County has struggled offensively, scoring just 16.5 points per game, which isn’t great going up against a good defense. That said, the Wildcats have looked much better against shared opponents this season, while Marbury isn’t playing very well on offense. Back on their home field, expect the Wildcats to play like they know what is at stake. Shelby County 20, Marbury 13

The Montevallo Bulldogs are coming off a one-point win against West Blocton for the second year in a row, which was big in their hopes of reaching the playoffs. Now, they’ll take on a 0-6 Sumter team that has yet to score a point this season. The Jaguars have been outscored 175-0 in their last four games after forfeiting their first two games of the season. They are giving up 39 points per game as well. Expect Joseph Anderson and Kial Cottingham to have big nights offensively and for the defense to take another step forward. Montevallo 42, Sumter Central 6

The toughest opponent is now behind Vincent after falling 47-6 to Randolph County last week, but the Jackets have another important one this week. Last year, they lost to Randolph County and it hurt their confidence and likely kept them out of the playoffs. This year, they are the better team and have to play like it. Now 4-2 overall and 2-2 in region play, the Jackets will take on a 1-5 Randolph team with five straight losses. The Tigers have scored 12 or less in all but two games this season and have given up 34 or more in every game. Vincent is scoring 31.2 points per game, while the defense is the best it has been in a while. With two big games against B.B. Comer and LaFayette after this, expect Vincent to gain confidence in a big win this week. Vincent 34, Randolph County 15

Coosa Valley now has two wins after a strong showing in a 34-6 win against Cornerstone. The Rebels are now giving up just 19.8 points per game and scoring 14.5 points per game. Last week’s game marked the best offensive game of the season for the Rebels, while the defense continues to play well. They’ll take on a 2-4 Abbeville team in a big region showdown this week, but Abbeville has scored 13 or less in four of six games this season. Expect the Rebels’ defense to be the difference-maker in this game. Coosa Valley 20, Abbeville 13