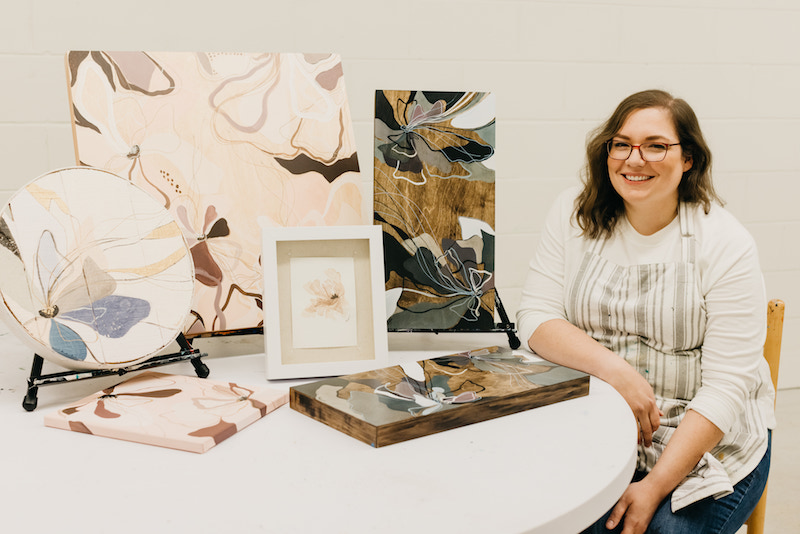 Pelham’s own Amy Anderson creates fun and expressive artistic creations. Most recently she completed one of the murals of Pelham’s Campus No. 124. (Contributed)

PELHAM – Amy Anderson has always loved art. Ever since she was a little girl she’s loved to express her creativity where ever she can. Today, her art is frequently found on the walls and windows of businesses throughout Pelham.

Anderson’s background is a balance of art and science. She has a bachelor’s degree in psychology, and has worked in substance abuse prevention and the mental health field. Even while she was delving into the psychology world, she could never hide her creativity.

“I was always trying to bring my creativity into my work, like if I did a presentation or anything,” she said. “My boss actually asked me to do a mural for our office, but my creativity would always shine through whatever I was doing.”

In 2015, Anderson decided to go all in, and began teaching art at the Cultural Arts Center in Dothan. She said she loved the studio’s inclusive feel, where adults, teens, kids and families could create without judgment. It is what inspired her current studio in Bluff Park, ART & Soul.

From the moment she began teaching, Anderson said she was hooked.

“I saw this difference in the person’s confidence,” she said. “It was like this major shift, and that’s when I was really hooked because since my background is in psychology, I felt this was so important.”

She said it’s fulfilling to see how painting and learning to create impacts a person.

“A lot of people have hesitation to create,” she said. “They’ve seen such beautiful art in their life, and they put so much pressure on themselves, but with art there is no right or wrong.”

Anderson describes her art as “fun and youthful,” using lots of bright colors, and subjects ranging from botanicals to space and robots.

“With murals, I go a little more intense, but with my personal art that I sell I tend to go with a more romantic palette like dusty pinks and mauves,” Anderson said. “I paint a lot of botanicals, and when I do more fun things I do like space, aliens, robots. I also love painting the anatomy of the body. Sometimes it’s very soft, but other times it’s very out there.”

Her platforms are scattered from your usual canvas to the windows of local businesses, which she does mainly around the holidays. Painting on walls, however, is her absolute favorite. She said it’s “freeing,” and there is something psychologically related to youth and painting on the wall.

“I can’t even believe how I’m so not anxious about it at all, I just go for it,” she said. “I just really enjoy it.”

In March, Anderson was chosen to paint a mural inside Pelham’s Campus No. 124 property as part of a “Call to Art” contest. She was chosen among six to eight finalists who were asked to tour the facility and sketch out their design for a particular wall. Anderson chose the wall closest to the front, and inspiration hit her.

“I felt it was the most family-centric area because they’re planning on doing a little park greenery area out there. I wanted to do something for kids and families,” she said.

Anderson’s mural is a pure representation of her art style: bright, attention-grabbing colors with vintage robots playing sports and having a good time under a Campus No. 124 flag. She’s even thrown an homage to Campus No. 124’s former identity as Valley Elementary School. Anderson said she has a good reason for choosing robots as her subject of choice.