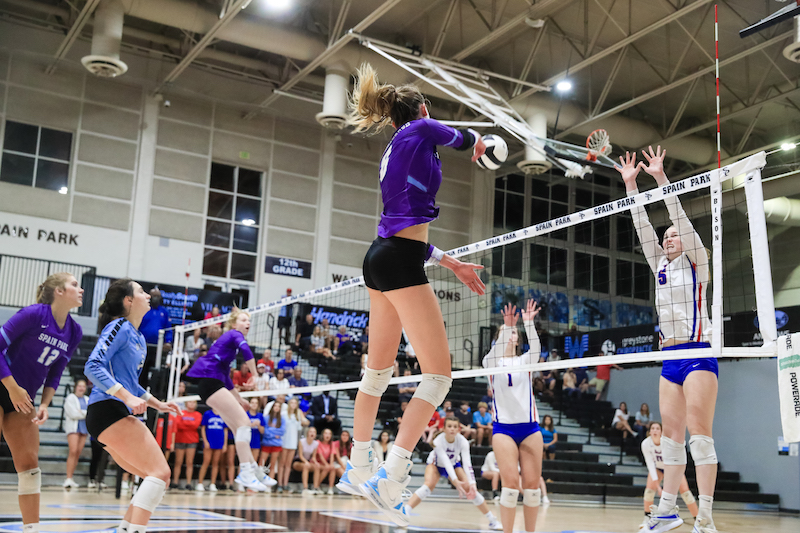 Audrey Rothman had a big night with 20 kills against Vestavia Hills to help Spain Park pick up a straight-set victory to finish area play a perfect 5-0. (For the Reporter/Dawn Harrison)

VESTAVIA HILLS – The Spain Park Jaguars have regained the top spot in the Class 7A volleyball standings, and have done so with a dominant stretch.

After losing the top spot to county foe Thompson a few weeks back, the Jaguars regained their spot atop the throne with 12 consecutive wins since the five-set loss to the Warriors on Sept. 14.

The latest win was a 3-0 sweep against area foe Vestavia Hills, which helped the Jaguars finish area play a perfect 5-0 this season to gain hosting rights for the area tournament.

With the win against the Rebels, the Jaguars improved to 31-4 on the season, while they also have wins against two of the teams that beat them.

Against No. 7 Vestavia Hills, Spain Park used its confidence from the win streak to get off to a strong start.

From there, the Jaguars never looked back. They used a 13-5 run the rest of the way capped off by a Rothman kill to pull off a 25-11 win in the opening set.

The Jags then jumped out to an 8-4 lead in the second set, holding around a four-point advantage throughout the set. Spain Park eventually gained a 24-18 lead, which allowed Rothman to put to rest another set at 25-18.

In the final set, the two teams played to an early 3-3 tie, but a kill from Rothman broke the tie for a 4-3 advantage, and the Jaguars gained some early momentum.

It ended up being the tightest set of the night, but Spain Park ultimately pulled away late for a 25-19 victory to close out the straight-set victory.

Rothman led the Jags in a strong outing with 20 kills, while Emily Breazeale added eight kills.

Bella Halyard led the team in assists with 28, while she also added 10 digs. Two others reached double digits in digs with Brooklyn Allison leading the team with 11. Rothman tied with Halyard for second on the team with 10 digs, while Breazeale added nine.

Ashley Fowler led the team with three aces, while Allison and Haley Thompson each had two.

Spain Park will host Gadsden City in the first round of the area tournament on Thursday, Oct. 14 with the championship match set after between the winner of Vestavia Hills/Hewitt-Trussville and Spain Park/Gadsden City squaring off against one another.