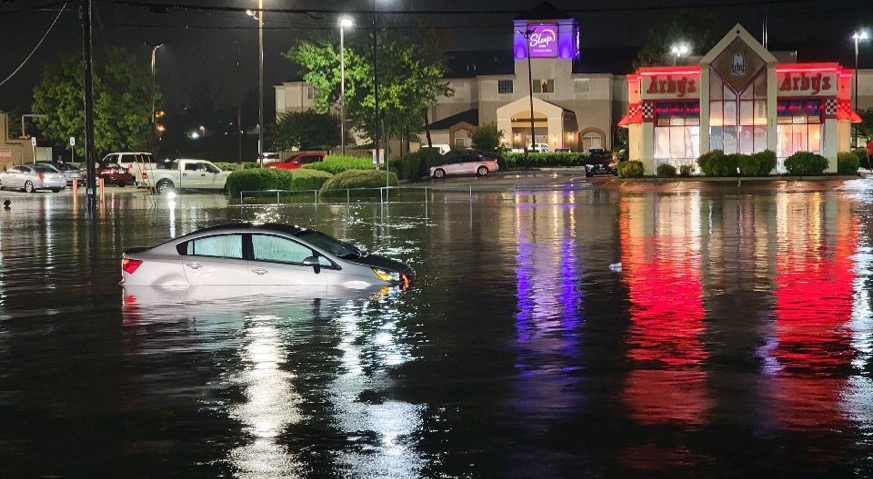 A car gets stuck in flood waters on Alabama 119 in Pelham on Wednesday night, Oct. 7. (Contributed/Russell Griffin)

PELHAM – Eating dinner on Alabama 119, sitting in their living rooms or just trying to drive home, many quickly became stranded on Wednesday night, Oct. 6 when several inches of rain fell in a short period of time.

It led to a flash flood emergency that caused most major roadways throughout cities such as Helena and Pelham becoming impassable.

Cars began getting stuck in flood waters quickly, while others had water pouring into their homes and others were forced to wait out the rain into the early hours of Thursday morning because of no way around.

“Around 8 p.m., we started receiving calls for water rescues that began with calls for rescues out of vehicles because we had a flash flood incident occurring,” Pelham Fire Chief Michael Reid said. “We are estimating around 10-13 inches of rain in that time period.”

What eventually became a flash flood emergency started when a storm hovered over areas of Helena and Pelham for multiple hours before shifting out of the area.

That led to a busy night for first responders in the cities as roads became impassable and shut down.

At one point, Pelham had 15 agencies from other cities and counties helping with response to the flash flooding.

Overnight, Pelham took 282 calls for service during the emergency situation, while 82 rescues occurred from homes and 15-20 were rescued from vehicles, according to Reid.

Remarkably, despite the multitude of rescues, only one injury was reported in the Green Park South area.

Back in March, a tornado hit the city as well, but no injuries were reported during that devastating day in the city, and now just one injury reported after a major flooding event with more than 10 inches of rain in a three-hour period.

“Just like the tornado, we had a lot of residents affected last night,” Pelham Police Chief Pat Cheatwood said. “We had a lot of people who had damage to their homes, that lost their vehicles, but as chief Reid said, only one reported injury. That is truly a blessing.”

Of the personnel responding to the flooding event, 60 were from PPD or PFD, while 47 were from other agencies, which is something Cheatwood and Reid were both extremely thankful for.

“At one time, we had five different areas of command where we were responded to people trapped in their homes,” Reid said. “We had five different areas in our city that were completely flooding where residents were requesting assistance out. Our resources were stretched very thin very quickly, so to have EMA here to put out a call for us and start pulling those logistics in was very helpful.”

At one time, there were 16 rescue boats in the city and 12 deployed, while two personal Sea-Doos, 11 service vehicles, six fire engines, three high-water vehicles, three Humvees and two command vehicles were all in use during the flooding.

Reid called it an enormous operation, while Cheatwood was thankful for everyone who worked through the night.

“We had a lot of personnel from a lot of different agencies here, and this is what these folks do best. They worked all through the night diligently doing their jobs and keeping people as safe as they could,” Cheatwood said. “Police officers and firefighters rescuing people from vehicles from residences, all through the night, all through the rain, lightning and everything else. We very much appreciate all their hard work. Our dispatchers were slammed with calls and they did a fantastic job handling all of those.”

Shelby County EMA Director Hub Harvey was also thankful for the response of everyone from both Pelham and other responding agencies.

He also said building inspectors would be out doing damage assessments throughout the day.

“First and foremost, we want to tell those who have suffered so much here tonight in the city of Pelham and in Shelby County that our hearts go out to you and that we are thinking of you,” Harvey said.

Pelham’s police and fire departments will be doing further assessments along with Shelby County EMA throughout Thursday.