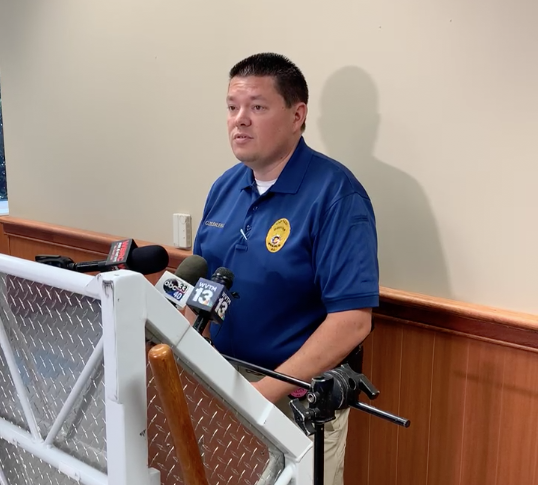 Hoover Police Department Capt. Keith Czeskleba shares updates regarding the recovery of two people who died after their vehicle was swept away in floodwaters on the night of Wednesday, Oct. 6. (Contributed)

HOOVER – Authorities have recovered the bodies of two adults from a vehicle submerged in floodwaters in the Riverchase area.

The victims, a 23-year-old male and a 23-year-old female, were found in their vehicle during a search the Hoover Police and Fire Department Dive Team conducted on the morning of Thursday, Oct. 7, after torrential rain caused flash flooding in several areas on the previous night.

“The victims’ families have been notified, but out of respect to them, we’re not going to be releasing their names at this time,” Hoover Police Department Capt. Keith Czeskleba said during a media briefing at noon on Oct. 7.

The search for the vehicle and its two occupants started on the night of Wednesday, Oct. 6.

Crews initially responded to reports of a vehicle trapped in rising floodwater on Riverchase Parkway West near Fox Creek Circle.

“The occupant of that vehicle was rescued, and fire crews left that scene to respond to other water rescues in the city,” Czeskleba said. “Hoover police remained on the scene to block the road on the east side of Riverchase Parkway West.”

About 10 minutes later, a second vehicle entered the flooded area from the opposite side of the roadblock and was immediately disabled.

The vehicle began floating down the roadway and became pinned against the guardrail, trapping the occupants, Czeskleba said.

Fire crews arrived on the scene, but were unable to access the occupants due to swift water and the location of the vehicle, according to Hoover Fire Department Battalion Chief Duane Prater.

At about 9 a.m. on Oct. 7, Dive Team members located the vehicle submerged in the water about 75-100 yards from where it went in, according to Czeskleba. Both victims were located in the vehicle and were recovered.

Crews continued to work to remove the vehicle from the water.

“It’s very heartbreaking for our first responders to respond there and to try to do everything you can to save those people, and then ultimately not be able to,” Czeskleba said. “We just could not get to them in time before the water took their car out of sight.”

“We would ask here in the city of Hoover, on behalf of the Mayor’s Office and our City Council, that you remember these two young people that lost their lives last night, and particularly remember their families as they deal with the tragic loss of these two individuals,” Brocato said.

Brocato said even considering the city’s drainage issues in certain areas during significant storms, the amount of flooding that occurred on Oct. 6 in that specific area of the city was unprecedented.

“I’ve been here for almost 50 years, and I’ve never seen flooding like that,” he said. “Just the amount of rain that fell yesterday, there’s no system designed out there that can address that.”