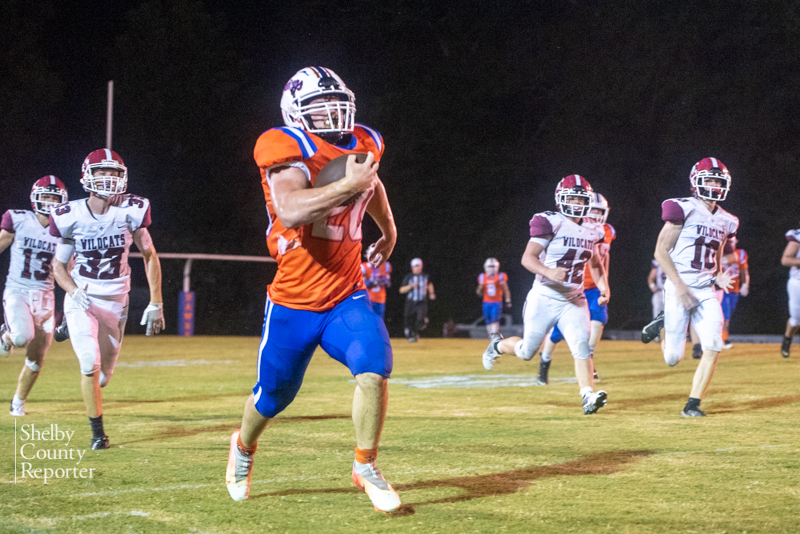 MONTEVALLO – Montevallo’s football team improved its standing for one of the playoff berths from Class 4A, Region 3 with a 48-6 win over Sumter Central on Oct. 8.

It was the third consecutive win for the Bulldogs, who improved to 5-2 overall and 3-2 in region play.

Next they have two more crucial region games, at home against Holt on Oct. 15 and at Dallas County on Oct. 22.

But first, the Bulldogs will enjoy the win over the Jaguars (0-7, 0-5), which featured Joseph Anderson tallying 168 rushing yards and two MHS quarterbacks combining to complete all seven of their pass attempts for a total of 138 yards and two touchdowns.

Anderson opened the scoring with a nine-yard touchdown run about 3 minutes into the first quarter.

Anderson rushed 10 times for 168 yards and four touchdowns.
The second touchdown came on a 17-yard pass from Kial Cottingham to Javon Rogers, and the Bulldogs scored again, still in the first quarter, on a 3-yard Anderson run.

Cottingham found Jaydien Rutledge on a 4-yard touchdown pass just over a minute into the second quarter to make it 27-0 after the point-after try was successful.

Next, it was Cottingham running it in himself from 16 yards out for a TD.
Anderson added another touchdown run, this one from 36 yards, with 2:09 remaining in the first half.

The second half was more Bulldogs, with Anderson recording an 11-yard touchdown run with 3 minutes to go in the third quarter.

Sumter Central got on the scoreboard when the game was already well in hand, with a 55-yard touchdown run as time expired in the third quarter.
Cottingham completed five passes in five attempts for 52 yards and two touchdowns, while Braxton King completed both of his pass attempts for 86 yards.