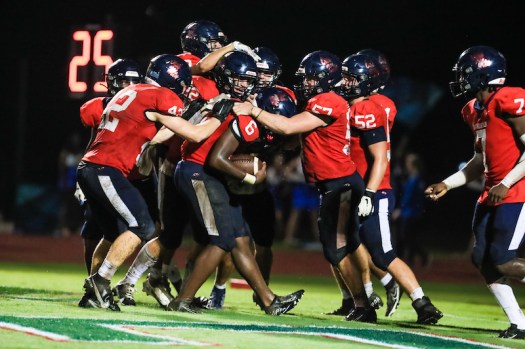 Oak Mountain players celebrate with Jah'ki Mullens after a pick-6. during the Eagles' 47-3 win against Tuscaloosa County. Mullens had never played football before this season. (For the Reporter/Dawn Harrison) 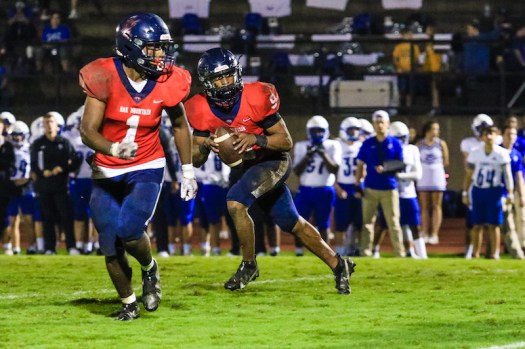 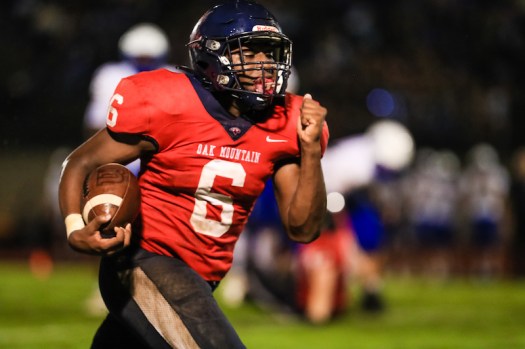 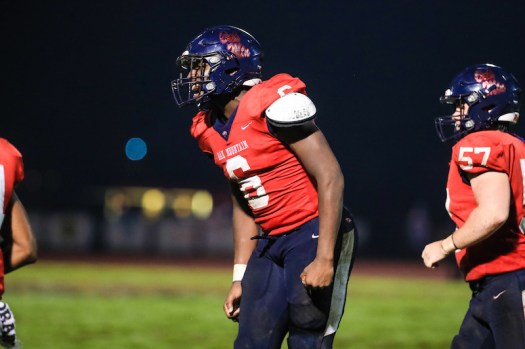 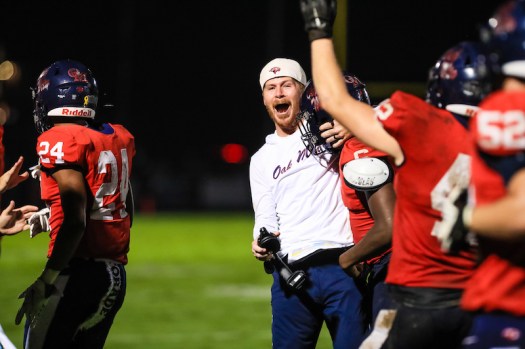 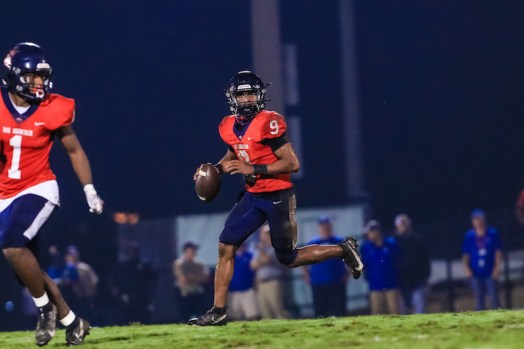 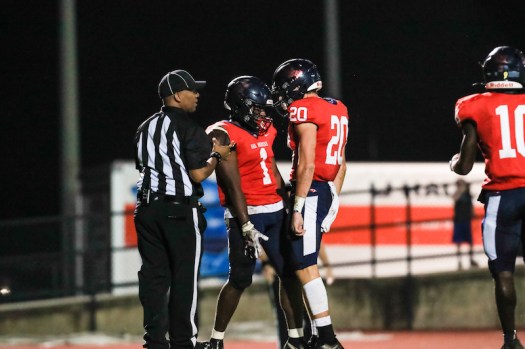 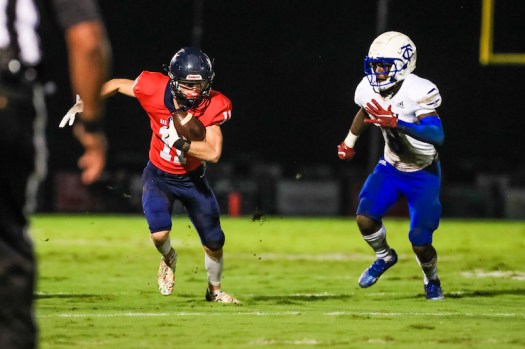 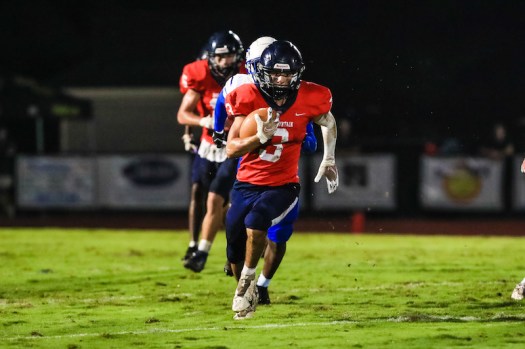 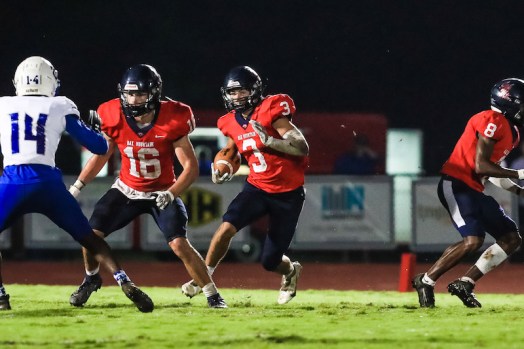 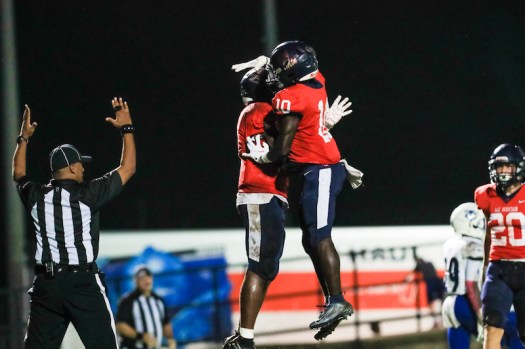 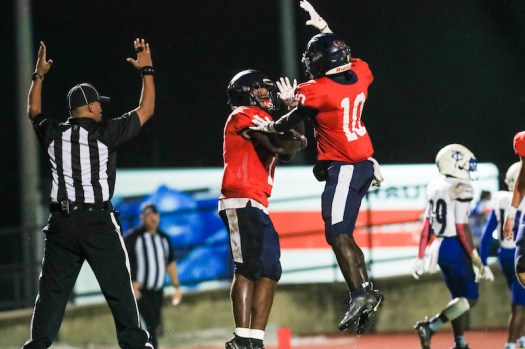 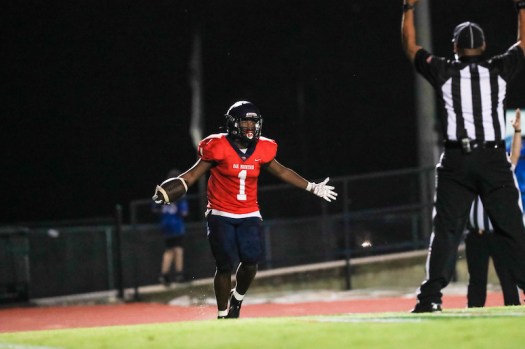 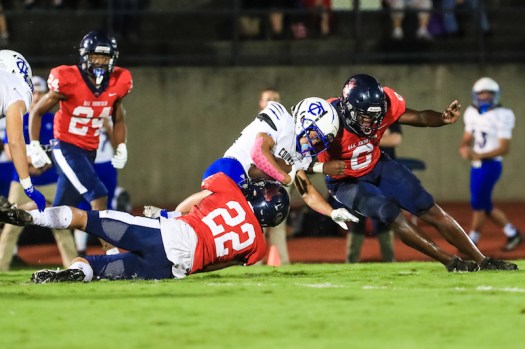 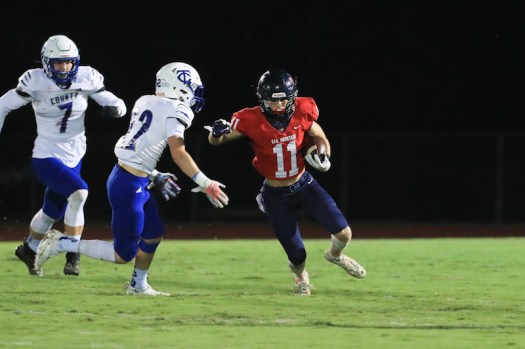 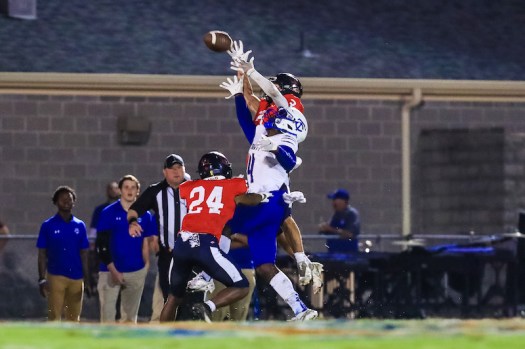 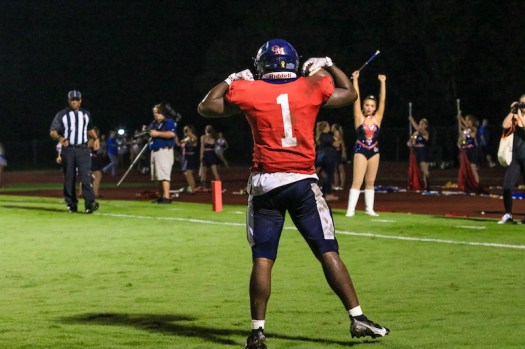 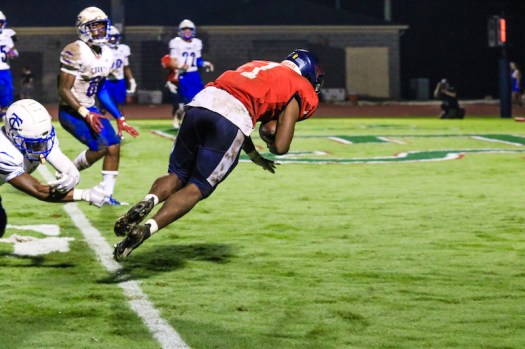 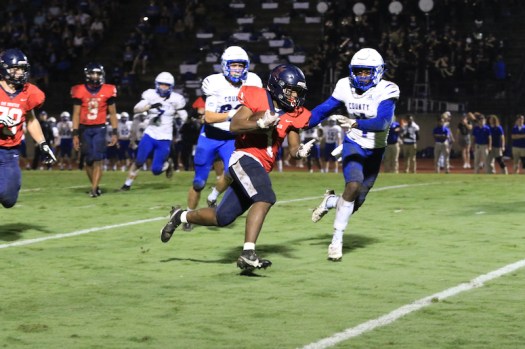 NORTH SHELBY – Oak Mountain’s senior class quickly bought in to a new coach during the 2021 football season, which led to a 5-1 start, and on Friday, Oct. 8, they etched another mark into their legacy.

Taking on Tuscaloosa County on senior night, the Eagles picked up a dominant 47-3 win to improve to 6-1 for the second year in a row.

That gave this year’s seniors a reason to celebrate with two of the best starts in school history in back-to-back years.

“It means a lot to them,” head coach Tyler Crane said of the seniors winning on senior night. “They jumped on them pretty quick and stayed up, which is what we told them we had to do. This group of guys has really worked really hard to get to where we are. It makes me proud to see what they’ve accomplished.”

From the start, it was all Oak Mountain.

After the two teams traded punts on their opening drives, Oak Mountain got in the score column on a fourth-down play.

On fourth-and-7 from the 30-yard line, senior quarterback and four-year starter Evan Smith got off to a strong start when he floated a pass to CJ Branson in the end zone, who then ripped the ball down for a touchdown and a 7-0 lead with 2:40 to play in the first quarter.

That became the score at the end of the opening period, but the Eagles were about to take flight.

Tuscaloosa hit two big pass plays that got the Wildcats inside Oak Mountain’s 5-yard line, but the Eagles forced a field goal to take cut the deficit to 7-3 with 8:48 to play in the half.

From there, Oak Mountain scored 27 unanswered to end the half.

Branson added his second score of the night on the ensuing Oak Mountain drive thanks to a 10-yard touchdown run that made it 14-3.

Then, on Tuscaloosa County’s first play of the ensuing drive, Jah’ki Mullens stepped in front of a pass and took it 12 yards to the house for another touchdown to quickly make it 20-3 with 5:44 left in the half after the PAT was missed.

“Jah’ki Mullens on the pick-6 had never played before coming into this season, and I mean, that’s huge,” Crane said.

Oak Mountain’s defense then stepped up again on the next drive, eventually forcing a turnover on downs after a fourth-down snap went over the head of Tuscaloosa County’s quarterback.

It set up the Eagles at the Wildcats’ 13-yard line. Queue Smith again.

After wide receiver Ethan Hammett hit a hard cut that left a defender in the rearview, Smith hit Hammett wide open for a 13-yard score and a 27-3 lead.

Tuscaloosa County quickly punted it back to the Eagles, who went right back down the field for another touchdown.

Smith connected for his third touchdown of the half when he rolled to his right and threw back across his body to Cade George, who made a strong catch for another touchdown and a 34-7 lead going into the halftime break.

Tuscaloosa County only crossed the 50-yard line twice in the opening half.

Oak Mountain picked up right where it left off in the early minutes of the second half when Smith hit Hammett for 78 yards and a touchdown to make it 41-3.

That became the final blow in a faster-paced second half that saw Oak Mountain add one more touchdown when Quest Agee scooped up a fumble and ran close to 90 yards for the touchdown to cement the 47-3 win.

“For the most part, our kids played hard,” Crane said. “They executed about as perfect as you can expect.”

Smith finished 8-of-12 for 173 yards and four touchdowns through the air, while the Eagles ran for 92 yards on the ground.

The defense forced three turnovers behind two interceptions, including the pick-6 from Mullens and one from Devan Moss to end the first half, and one fumble on the scoop and score from Agee.

Now, Oak Mountain will take on No. 1 Thompson on the road next Friday in a battle of teams with a combined one loss.

“Try to be 1-0, just like always,” Crane said of the focus going into the game. “They’re really good, but we’re going to give them everything we’ve got.”