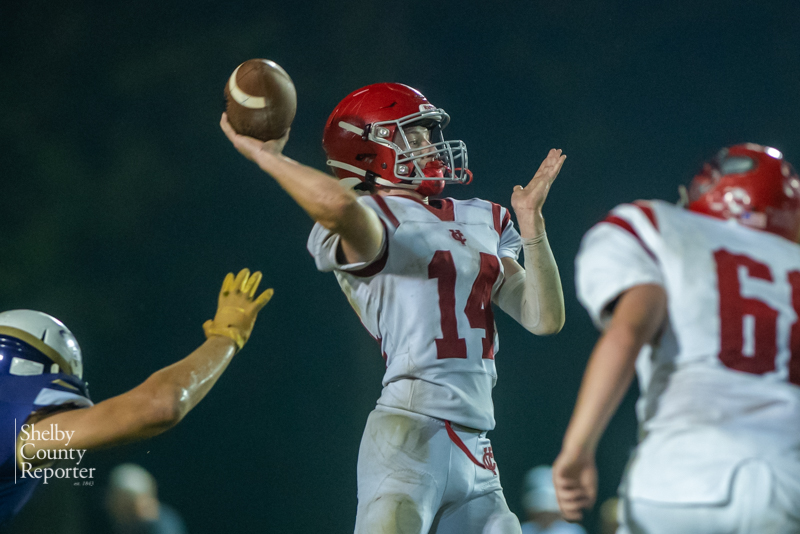 Coosa Valley scored more than 50 points for the first time since 2013 to clinch a playoff berth on Friday, Oct. 8. (Reporter photo/Keith McCoy)

HARPERSVILLE – A second-straight win for Coosa Valley Academy clinched the Rebels’ spot in the AISA playoffs and a top three finish in Region 1 on Oct. 8, as CVA cruised past Abbeville Chrisitan, 55-24, to close its home schedule.

The Rebels’ 16th playoff appearance in program history, and first since 2018, will be only the third since DiLorenzo led CVA to back-to-back trips during his first stint as head coach in 2009 (semifinals) and the 2010 AISA 1A state title.

“Piggy back to June 1 when I first got here and started with a group of guys that didn’t know me, and I think didn’t really understand what it took to win, and to come out tonight and really play a complete game: offense, defense and kicking. Everybody did their part,” DiLorenzo said. “It’s not so much about making the playoffs, but the product we are on the field from our players, assistant coaches that did a great job and to (Pam) Lovelady, who hired me. It’s really gratifying to win this third game and be a team that is better today than we were at the beginning of the season.”

Senior quarterback Cannan Johnson helped open the game Friday with an interception returned for a touchdown on the defensive side to give the Rebels an early 7-0 lead.

He then went on to account for 350 yards of offense with 210 yards and two touchdowns passing as well as 140 yards and three touchdowns on the ground.

Hunter Hill accounted for 18 points on the night with touchdown runs of 65 and 9 yards and a 35-yard touchdown reception. He also led the defense with 12 tackles.

Weston Dooley also had a touchdown catch and intercepted his ninth pass of the season through eight games.

CVA (3-5, 3-1 Region 1) will travel to Lowndes Academy on Oct. 15 to challenge the Region 1 front-runner in its region finale for at least a tie atop the region standings.

“We have a chance to improve where we are by beating Lowndes next week. They’re undefeated, so that’s a tall task, but to be in a position where we can affect our standing in the region is a great accomplishment,” DiLorenzo said. “We’re getting ready to prepare for Lowndes knowing we have a chance to win our next game because we know we can.”