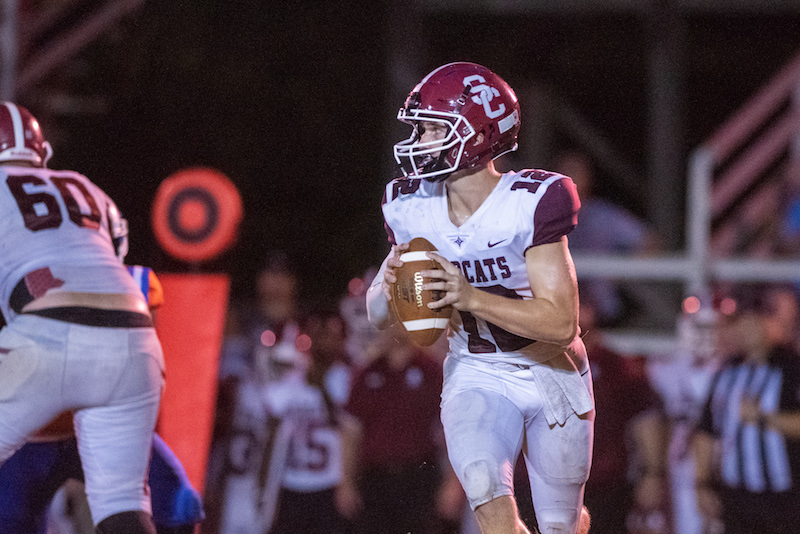 MARBURY – A string of missed field goal attempts kept Friday night’s matchup between the Shelby County Wildcats and Marbury Bulldogs tense, but it was Marbury’s final attempt with 52 seconds left that gave them the edge, putting the Bulldogs ahead to win 17-14.

Shelby County threatened as time ticked away in the fourth quarter, driving the ball to around the Marbury 26-yard line, and a 5-yard penalty on Marbury gave the Wildcats an additional advantage. The Wildcats were stuffed on the next play, however, as the final seconds turned into heartbreak.

It was Shelby County that put points on the board first, as Connor Aderholt connected with Matthew Pearson for a 43-yard touchdown play with 10:20 in the first quarter. On the next drive, Jay Butler made an interception but the Wildcats didn’t capitalize.

The second quarter was a messy one on both sides of the ball, seeing missed field goal attempts from both teams, a bad snap for Marbury and a dropped pass in the end zone for Shelby County.

Shelby had a moment of hope after returning a short Marbury punt to get into scoring position, but a pass was batted down by Marbury’s Cody Whitford, and a Wildcat field goal attempt was blocked by Andrew Urnis. The score stood at 7-0 in Shelby County’s favor at halftime.

The only points of the third quarter were Marbury’s touchdown and extra point to tie the game, then the Bulldogs began the fourth with another missed field goal attempt. Then, seemingly out of nowhere, the Wildcats roared back as Pearson stunned Marbury with an 80-yard touchdown run to put Shelby County up 14-7.

Marbury’s Braedan Mizusawa recovered a Shelby County fumble and pitched it to Whitford for a would-be touchdown, but the Bulldogs were flagged for an illegal forward pass. Marbury retained possession, however, and quarterback Jack Thompson’s pass was tipped but Whitford came down with the ball. Then, Thompson handed it off to Mizusawa for a short touchdown to tie the game at 14 with 5:18 left to play.

The only other score would be Marbury’s game-winning field goal, resulting in the final score of 17-14.

Shelby County had 360 total yards of offense, and Aderholt put up 195 passing yards. On the defensive side, Cooper Pennington made 11 tackles (2 for loss), Will Stroud made 9 tackles and Butler had 8 tackles plus the interception.

The Wildcats will return home for a matchup with Jemison on Oct. 22.

Jags can’t keep up with No. 2 Hoover in…