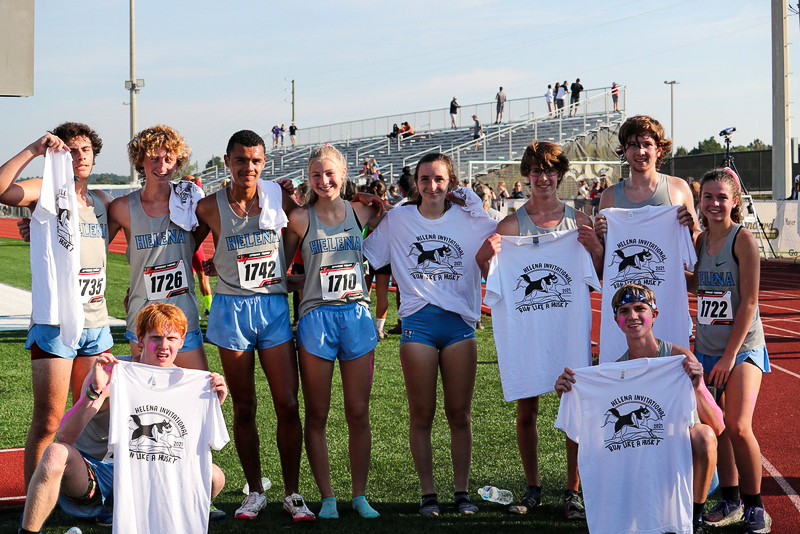 The Helena cross country team won its host event on Saturday, Oct. 9, with the boys and girls both taking the top spots, while several other local teams competed in the event. (Contributed)

HELENA – In their home event, the Helena Huskies put together an impressive showing at the 2021 Helena Invitational, sweeping the boys and girls races with wins.

In the overall team standings, the boys finished with 23 points in a dominant showing with the next closest opponent being Pike Road with 119 points.

The girls race was a tighter contest, but the Huskies still won by more than 40 points with a team total of 24 points, which beat out University Charter School by 55 points.

The Pelham Panthers, Shelby County Wildcats, Montevallo Bulldogs and Indian Springs all competed in the event as well.

Helena remained the highlight, however, and specifically Mallory Barton.

The junior for the Huskies picked up a win in the girls race thanks to a time of 19:53.61. It not only marked her first win of the season, but she also set a new personal record with her time.

Teammate Ashlynn Beery followed suit with a personal-record time of 19:58.06, which placed her right on Barton’s heels in second.

Beyond those two, Lindsey May and Olivia Timmons both finished inside the top 10 as well.

Pelham’s Lacy Lambert was the highest finisher from the county not on Helena’s team, as the freshman continued an impressive season.

Lambert finished inside the top five by bringing home fourth thanks to a time of 20:15.37.

In one of Pelham’s best showings of the season, Ana Bravo added another top-20 finisher thanks to claiming 13th behind a time of 21:48.44.

Mikayla Leftwich added one more in the top 30 for the Panthers. The sophomore claimed 27th after finishing the race in 23:12.82.

Indian Springs’ only runner in the girls race was Sohana Caplash, who finished in 20th with a time of 22:24.08.

Shelby County’s Ava Tortorigi was the final highlight in the girls race. The eighth grader for the Wildcats finished inside the top 50 at 48th thanks to a time of 26:06.27.

In the boys race, Helena didn’t have a winner, but the Huskies did have three finish inside the top five.

Beyond that, Gage Pritchard finished sixth with a time of 17:09.15, while Larkin Watters and Barrett Draiss finished eighth and ninth, respectively.

Joshua Morris and Trent Palladina both finished inside the top 20.

Indian Springs also had an impressive showing in the race, highlighted by Mark Underwood in 14th. He finished the race with a time of 18:07.54 to claim the top-15 finish.

The Pelham Panthers finished sixth in the team standings thanks in large part to Thomas Gennari and Nathan Tau finishing inside the top 25.

Montevallo’s Sam Adams also put together an impressive race for the Bulldogs. The freshman finished 15th with a time of 18:11.44