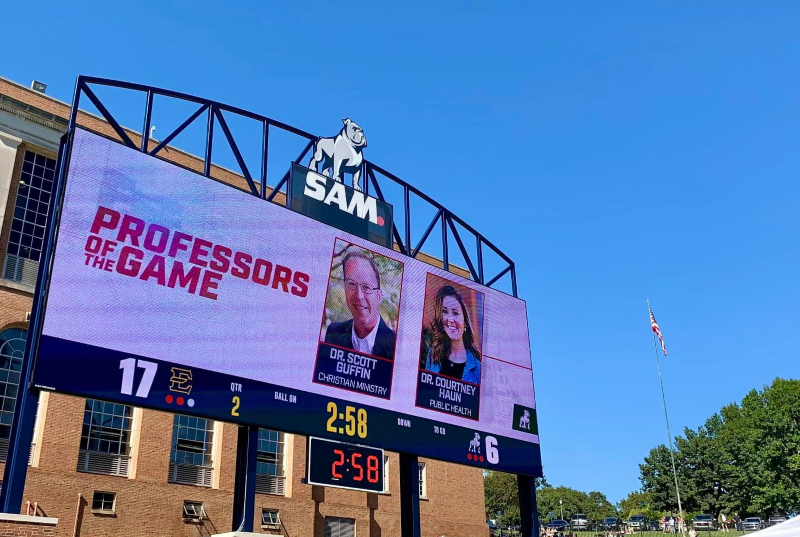 Pelham resident and Samford professor Courtney Haun was honored with the title "Professor of the Game" at the Samford University vs. East Tennessee State University game on Sept. 25. (Contributed)

Haun, an assistant professor and director of Samford University’s Healthcare Administration Undergraduate Program, was nominated by one of her students to receive the title of “Professor of the Game.” The title is given to a school professor during one of the football games to highlight the hard work and dedication the individual puts into their job every day.

Haun was nominated by one of her “student-athletes who is pursuing a graduate degree in healthcare administration and plays football,” she said.

Haun said she was particularly excited about the game due to the fact the rival team is her alma mater, but she wasn’t prepared for the outpouring of support she would receive that day.

“I already knew the game would be great since it was against my alma mater, East Tennessee State University,” said Haun. “What I did not know was how much love and hospitality I would receive on game day from the Samford University football staff and team.”

Haun received the full treatment on game day, and she said it was quite the experience to be recognized in such a way.

“We met the coach, led behind him during the dog walk (where the players are cheered on as they walk to the stadium), headed over to the stadium for a tour of the field house and athlete academic center, received a gift from the team, and then was recognized on the billboard during the game,” she said. “And, it was a terrific game! ETSU ended up winning in overtime. I was so proud of both teams.”

Haun said she was thrilled to be nominated.

“What really made the day and recognition so special was being nominated by one of my students,” she said. “The letter that I received from him truly warmed my heart. On top of that, the kind messages, texts, and emails I received from other students and faculty congratulating me. It was such an honor, and I felt so valued by my students and colleagues.”

Haun’s love of teaching is obvious when talking to her as she cannot contain her excitement at working with her students and being a part of their academic success.

“My heart explodes with excitement when I see my students have that ‘ah-ha’ moment in class,” she said. “When the pieces of the puzzle finally come together and they truly understand the course content, I can see the light-bulb turning on in their minds. There is simply nothing like it, and it’s hard to put into words.”

She added she loves to see her students succeed outside of school, and applauds them as they go onto their next journey in their new careers.

“That’s truly the icing on the cake. Moments such as the ‘Professor of the Game’ recognition remind me that I am on the right track – to help others create a life they love through health, education, faith and overall wellbeing.”