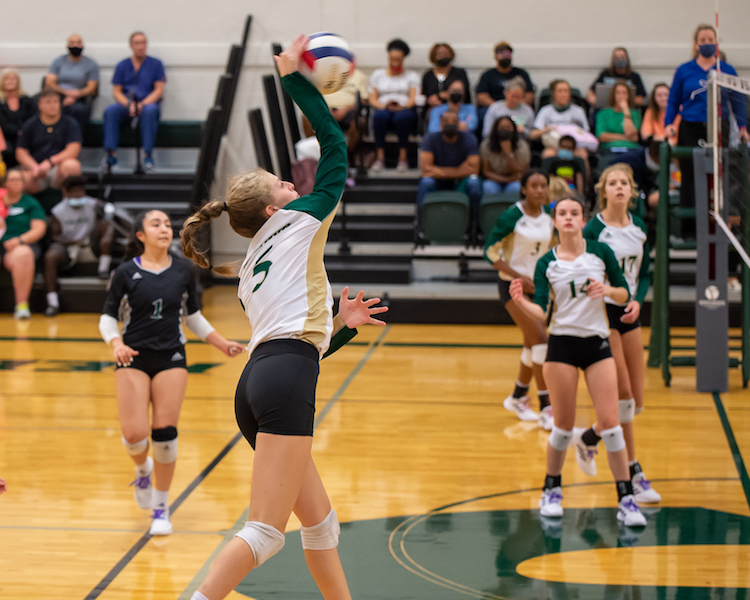 The Pelham Panthers put together a strong stretch of play during the final week of the regular season. (For the Reporter/Larry Dancy)

Following a 4-6 stretch to end September, the Pelham Panthers have bounced back in a big way to gain confidence at the right part of the season.

The Panthers took down Chilton County, Briarwood and Tuscaloosa County Oct. 4-5 to lead into their final regular-season tournament of the year Oct. 7-9.

Playing some of the best teams in the state for three consecutive days, Pelham won eight more in a row to extend its winning streak to 11 in a row before losing a championship match to Class 6A No. 1 Spanish Fort 2-1.

The busy stretch of 9 matches in three days started in a battle against Buckhorn in which the Panthers put together a dominant opening set of 25-9.

The second set was much more tightly contested, but Pelham played with the confidence of having the lead, which led to the Panthers eventually pulling out a 29-27 win for the sweep.

Courtney Proffit had seven kills in the win, while Averi Smith and Victoria West both had six kills. Emma Studdard had a strong match at the service line with five aces, while Shay Walsh totaled 24 assists.

Taking on Gulf Shores that same night, the Panthers got off to another dominant start with a 25-16 win in the first set, but yet again, the second set was more of a struggle.

The Dolphins ended up responding with a 25-11 victory to force a third set.

Pelham, however, found enough in the final set to pull off a 15-13 victory in clutch fashion to pick up the set win.

A night later, the Panthers picked up straight-set victories against Alabama Christian Academy and Baldwin County by scores of 25-14, 25-6 and 25-12, 25-15, respectively.

That carried into an even more dominant start on what became a busy Saturday for Pelham.

The Panthers opened the day with their first of four consecutive straight-set victories on the day thanks to a sweep of Baldwin County.

Pelham won the match with set victories of 25-18 and 25-11 to kick start what was a dominant two matches in a row.

Proffitt finished with 11 kills, while Hayhurst and West both added six and Smith finished one behind with five. Walsh continued setting them up with 25 assists.

From there, Pelham went on to pick up one of its most dominant wins of the season against Sumiton Christian. The Panthers flew out of the gate with a 25-3 win in the opening set and weren’t far off that pace with a 25-8 win in the second set.

Hayhurst led the way this time around with 12 kills, while Tammy Melendez was on fire from the service line with 12 aces in the win.

Pelham then took on Class 4A No. 2 Madison County and continued an impressive stretch.

The Panthers took the opening set 25-21 for the 1-0 advantage, and although the second set was tightly contested, the Panthers were in a rhythm and found a way to pull off a 27-25 victory behind a balanced attack.

Proffitt totaled seven kills in the win, while Hayhurst added five and Smith four. Camryn McMinn finished with six aces to lead the way at the service line, while Walsh finished with 17 assists.

Perhaps, the biggest win of the tournament came in the next matchup against No. 5 Saraland, who had lost just two matches all year.

The Panthers, however, not only picked up a win, they swept the Spartans in dominant fashion for a big momentum boost.

The Panthers gave up no more than 12 points in either set, winning the first set 25-8 and the second set 25-12 to earn a spot in the championship against No. 1 Spanish Fort.

Proffitt once again led the team with six kills, while Smith finished with four aces and Walsh totaled 13 assists.

Taking on the No. 1 Spanish Fort, Pelham was looking for redemption following a 2-0 loss to the Toros earlier this season.

And in the opening set, they looked like the better team this time around as well.

Spanish Fort started with a 25-17 victory to take an early 1-0 lead, but the Panthers battled back in the second set.

In a thriller with the championship on the line, Pelham gutted out a 26-24 win in the second set to force one final set for the title.

The Panthers, however, ran out of steam following an exhausting day and an tiring effort in the second set. That led to the Toros picking up a 15-10 win in the third set and the championship.