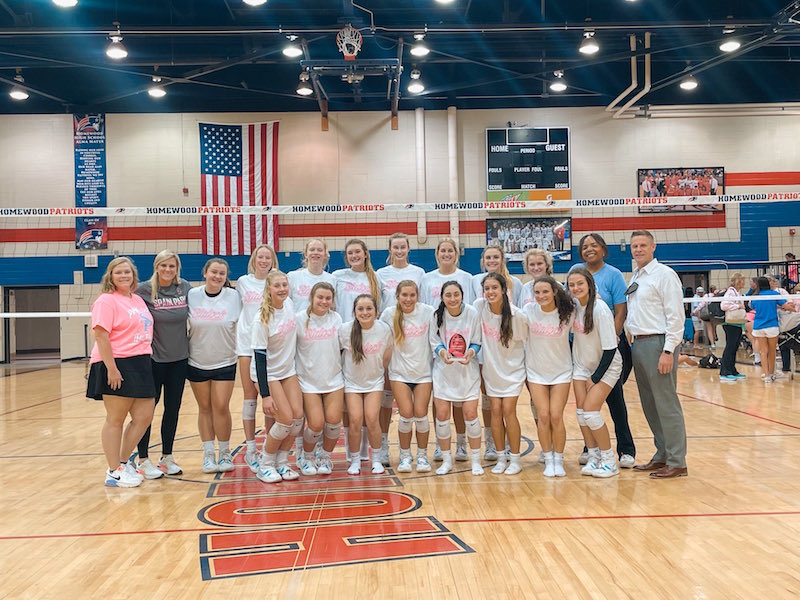 The Spain Park Jaguars took home the championship at one of the toughest tournament's of the year to end the regular season. (Contributed)

HOMEWOOD – The Spain Park Jaguars couldn’t enter the postseason with any more confidence after winning the Blalock Tournament on Saturday, Oct. 9 for the first time in school history.

Thanks to seven consecutive wins in the tournament, the No. 1 Jaguars not only brought home the title, but were able to improve to 39-4 on the season and extend their win streak to 20 in a row.

Entering the event off a 3-0 sweep of Oak Mountain the night before on Thursday, Oct. 7, the Jags started the tourney with two consecutive sweeps against talented teams in Montgomery Academy and Alexandria to kick start a strong run.

Spain park won the first set against Montgomery Academy 25-12 in dominant fashion, but it took 68 points before the second set was won.

Battling back and forth against the Eagles, the Jags eventually won a 35-33 set to pick up the 2-0 win and start the tournament on a high note.

That was all the boost needed heading into a match with Alexandria, as the Jags picked up dominant wins of 25-10 and 25-18 to end Friday night.

That led into an exhausting but rewarding Saturday.

The Jaguars were tested out of the gate on Saturday with Mountain Brook.

The battle got even more challenging when Mountain Brook won the opening set 25-22.

In a 1-0 hole, Spain Park bounced back with a 25-19 victory in the second set, paving the way for a third-set tiebreaker.

The Jags were able to put together another clutch set, earning match point at 14-13. They capitalized on the opportunity to pick up a 15-13 set victory for the 2-1 win.

That ended up being the only set Spain Park dropped throughout the tournament.

Spain Park won its next match with ease against Tuscaloosa County, winning the opening set 25-14 and the second set 25-15 for the sweep.

That led to another showdown with Thompson, who took over the No. 1 spot from the Jaguars a few weeks ago, but Spain Park has responded since and did so again with a 2-0 (25-18, 25-20) win to advance in the tournament.

From there, the Jaguars had to go through two of the state’s best teams to get to the championship, but they started with a bang against Class 5A No. 1 Bayside Academy.

The Jags picked up another sweep, winning the two sets by scores of 25-20 and 25-16 to earn a spot in the championship.

In the title match, the Jaguars squared off against McGill-Toolen—the team one spot behind them in the standings.

After a tight battle in the opening set, the Jags were able pull away over the final few points to pick up a 25-22 victory.

With the 1-0 lead, Spain Park played with that edge throughout the second set, which led to a strong showing against a good team to pull off a 25-19 win and complete the championship run.

Audrey Rothman had an impressive final week of the regular season, totaling 112 kills, 49 digs, 15 blocks and seven aces. Emily Breazeale was also big on the attack with 84 kills, while she totaled 59 digs, nine blocks and 10 aces.

Bella Halyard led the team in assists with 122, while she also added 51 digs, 28 kills and nine aces. Lilly Johnson wasn’t far behind with 92 assists.

Brooklyn Allison led the team with 63 digs and was also strong at the service line with nine aces.