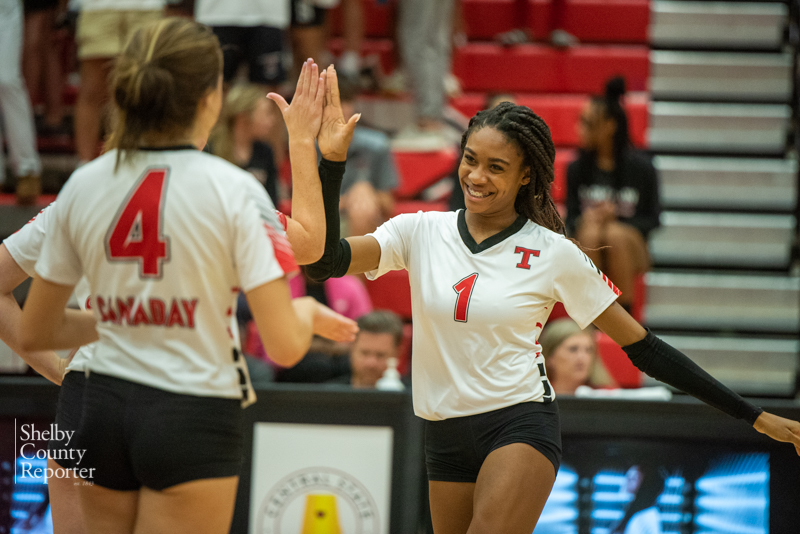 The Thompson volleyball team competed against some of the best teams in the state at the Blalock Tournament to end the regular season. (File)

HOMEWOOD – The Thompson Warriors will enter the postseason off a 2-3 finish to the regular season, but most importantly, more competition against some of the state’s best teams.

Against one of the most challenging schedules in the state, the Warriors have conquered much of the season, beating several No. 1 teams and even taking over the No. 1 spot in Class 7A at one point.

The level of competition was no different in the final weekend of the regular season for the Warriors, starting on Thursday, Oct. 7.

Taking on No. 2 McGill-Toolen in the team’s final best-of-five regular-season matchup, the No. 4 Warriors fell behind 2-0 in the match after dropping the opening set 25-19 and the second set 25-21.

But in a moment that may be key for helping with postseason success, the Warriors dug deep against a state-championship contender and battled back.

They went on to win the third set 25-21 to stay alive, and then outlasted the Yellow Jackets in an exhausting third set.

With the match on the line, Thompson battled back and forth, but the Warriors eventually fought their way to a 30-28 set win to force a fifth-set tiebreaker.

In what was an exciting finish that went down to the wire, Thompson ended up with chances to win the set, but it was ultimately the Jackets in a 15-13 victory.

The Warriors, however, battled back from down 2-0 to earn a chance to win in the fifth set against one of the state’s best teams.

That led into the Blalock Tournament on Friday, Oct. 8 and Saturday Oct. 9, which brought together the state’s top teams.

The Warriors started with confidence in straight-set victories against Chelsea and Austin.

With those 2-0 wins, Thompson carried confidence into Saturday’s final day, but the Warriors were set to square off with 5A No. 1 Bayside to start the day.

They got off to a strong start, winning the first set 25-17 to build momentum, but the Warriors couldn’t find the same success from there.

Bayside bounced back with a big second set, winning 25-14 to stay alive and force a third-set tiebreaker. And in the tiebreaking set, the Admirals built off of the momentum shift, pulling away for a 15-7 victory.

The Warriors, however, ran into a hot Spain Park team that went on to win the tournament and extend its winning streak to 20 matches in a row.

Thompson gave the Jags a strong test, but ultimately, the Jaguars were able to close the first and second set in impressive fashion for wins of 25-18 and 25-20.