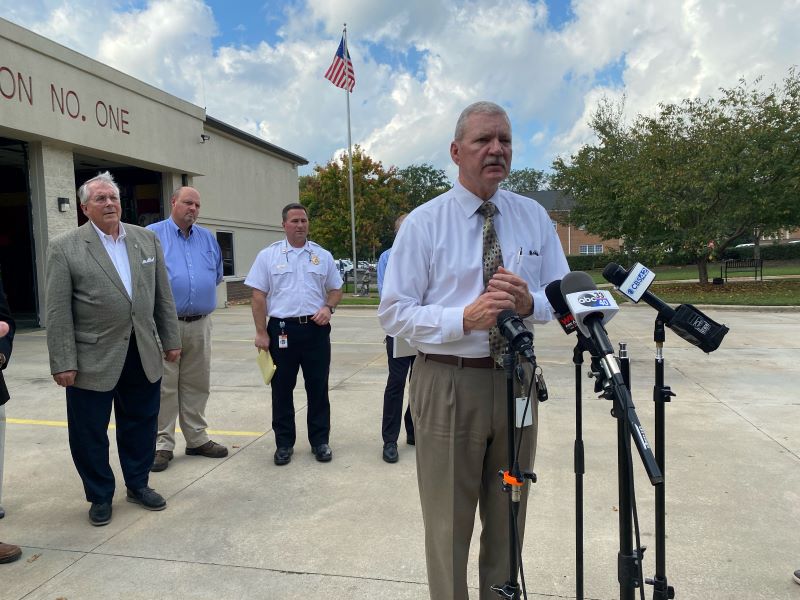 “As you all know, a week ago tomorrow Pelham experienced record-setting rainfall which resulted in some devastating flash flooding in certain parts of our city,” said Pelham Mayor Gary Waters. “We’re assembled here today to give you an update on recovery efforts that are ongoing and to answer any questions you may have regarding recovery.”

Pelham Fire Chief Mike Reid said the fire department has been working closely with the Shelby County Emergency Management Agency (EMA) to complete damage assessments throughout the city. Reid said they have been working through the assessments since early Thursday morning, Oct. 7, immediately following the flood.

“A lot of these assessments were windshield assessments to kind of start pushing that information up to the governor’s office,” said Reid. “Since then, we have conducted over 250 assessments of homes.”

Reid encouraged individuals affected by the storm to contact EMA and report any and all damages they have received due to flooding.

“If you have not contacted EMA at shelbyema@shelbyal.com to report your damages or that you received flooding, we need you to do that,” said Reid.

“Most of the efforts over Thursday, Friday and over the weekend were conducted based off of information we fed to EMA and supported them with areas of our city that were affected based off of the emergency calls we received into our dispatch center,” Reid continued.  “Their actions were based off of what we knew at that time. A lot of this flood damage that has occurred is at homes we did not know about because they did not call, residents did not feel it was an emergency, so we had no knowledge of that. We are getting that information now and trying to get ahead of that, and do those assessments as quickly as possible.”

Reid said they have added five additional inspectors, and have been operating the Unified Command System with the fire department, police department, public works departments and EMA for the recovery operation, and they are making “an effort to be as encompassing and as supportive of this recovery as we can be so we can assure all of our citizens’ needs are met.”

Andre Bittas, the director of development services and public works, gave updates on clean-up efforts throughout the city.

“As you know there was a lot of debris coming out of the flood-damaged homes,” Bittas began. “We started that effort Monday morning. We also have assistance from the city of Alabaster. We almost hit about 20 neighborhoods so far. We have retrieved a lot of debris, and we’re working around the clock to collect as all the debris as soon as possible. We’re hoping to sweep the whole city in the next day or two to complete that effort. We’re also working on repairs, we have some roadway repairs and storm sewer damage, so we have engaged some contractors to help us with that work, so that is ongoing and we are hoping to complete that work in the next few weeks.”

Bittas said they are going throughout the city to assess other damages, and they are adding them to the list of priorities.

“We’re continuing to work with the community to make sure their needs are met and we encourage people to reach out to the Public Works Department for information,” said Bittas.

Hub Harvey, the Shelby County EMA director, reminded everyone of the volunteer agencies and resources available to help those in who have been impacted.

“Our hearts go out to those who have been impacted by what has happened here in the city of Pelham in the last week or so,” Harvey said. “We would like to ask if you still have unmet needs, we have numerous voluntary agencies that have volunteered and been present going back all the way to Thursday, such as the Salvation Army, Red Cross, Baptist Disaster Relief and others, but we need to make sure we have your information. If you still have unmet needs please call United Way of Central Alabama at 211, and give them your information so we can make sure to get someone out there to help you as soon as possible.”

Harvey then expressed his appreciation of Pelham’s fire department, police department, city officials and the leadership of the city of Pelham for the way they’ve handled the situation.

Mayor Waters then announced the Pelham City Council had declared a local-measure state of emergency earlier that afternoon, and also approved the authority of Police Chief Pat Cheatwood to enact a curfew if necessary and earmarked $500,000 in the Fiscal Year 2022 budget for possible future emergency funds.