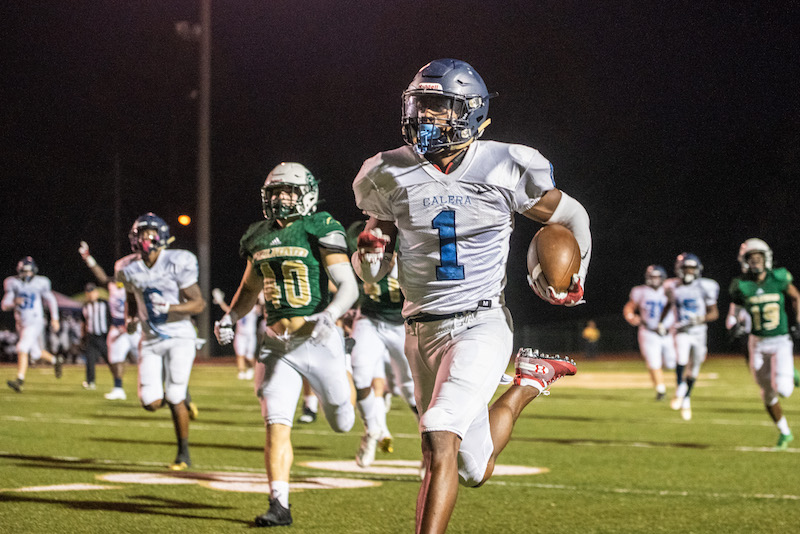 Calera wide receiver and Alabama commit Kobe Prentice was one of five county players to be named to the Alabama All-Star team for the 35th annual Alabama-Mississippi All-Star Classic. (Reporter photo/Keith McCoy)

The county will be well-represented at the 35th annual Alabama-Mississippi All-Star Football Classic on Saturday, Dec. 11, at the University of Southern Mississippi’s Carlisle H.H. Roberts Stadium in Hattiesburg.

This year’s Alabama All-Star roster will feature five of the county’s top players, including three from Thompson, one from Calera and one from Pelham.

“We are thankful to the selection committee for their efforts in selecting this year’s group,” said Director of the Alabama High School Athletic Directors and Coaches Association Brandon Dean. “They went to great lengths to make sure each AHSAA class and district is represented in the selections.  We believe we have assembled a group of student-athletes who will be outstanding representatives for their respective schools, communities, and the AHSAA. We look forward to traveling to Hattiesburg and putting forth our best effort.”

The Warriors, who tied with Auburn for the most players selected, will be represented by quarterback Conner Harrell, edge rusher Jeremiah Alexander and defensive back Tre’Quon Fegans.

Calera’s Kobe Prentice, and Alabama commit, will join the three at this year’s game, while Pelham offensive lineman Caleb Newell will also represent his school on the All-Star team.

Starting with Thompson’s players, all three have had remarkable seasons to help lead the Warriors to an 8-0 record in their quest for a third consecutive state championship.

Harrell has thrown for close to 2,000 yards this season with 26 touchdowns and just three interceptions to lead Thompson’s offense. The North Carolina commit has also totaled close to 300 yards rushing with four additional touchdowns.

His performances have helped the offense score 41 or more in every game for an average of 50 points per game.

Defensively, Alexander has had remarkable senior season for the Warriors. The Alabama commit has totaled 20 tackles for loss and 56 total tackles through the first eight games.

A hybrid linebacker/defensive end, he has been unblockable for a large portion of the season, which has led to the defense giving up an average of 3.3 points per game. Thompson has yet to give up double digits and has posted four shutouts to just three touchdowns.

Fegans is also a big reason for that success.

In the secondary, the four-star recruit who recently decommitted from Miami, has totaled 22 tackles, two tackles for loss and one interception, while defenses stay away from passing to his side of the field as much as possible.

Those three will represent the Warriors on Alabama’s All-Star team as three of the best players in the country.

Prentice and Newell are both right there alongside them as well.

Prentice, who is one of the state’s fastest receivers and an Alabama commit, has totaled 86 yards or more in five of seven games this season and more than 100 yards in four of those five.

He has been dangerous both downfield and after the catch, which has helped the Eagles put together four wins this season in the midst of their best season since 2017.

Newell is one of many bright spots on Pelham’s offensive line, but a senior, he is the leader.

An All-County first team player last year as a junior, he totaled 59 pancake blocks and graded 84 percent for the year.

Now, he has helped the Panthers clinch the two seed in the playoffs as one of the most trustworthy offensive linemen in the state.