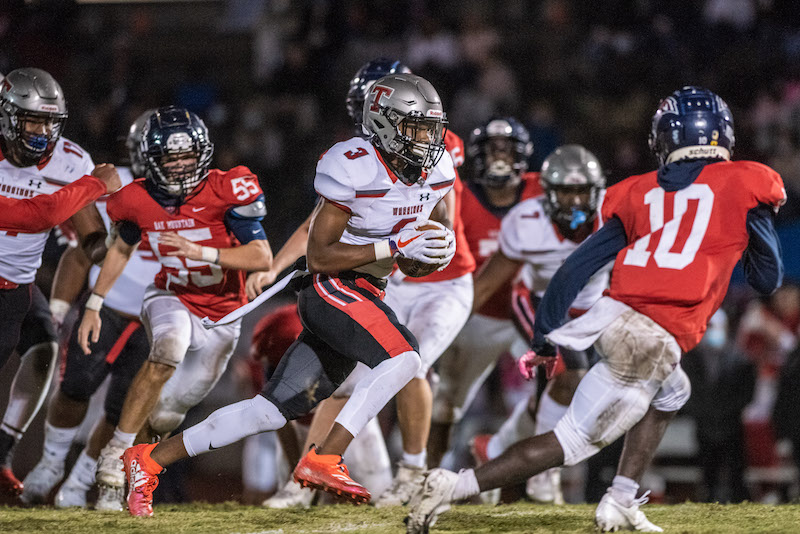 The Thompson Warriors will play host to the Oak Mountain Eagles this Friday in our Game of the Week. (File)

We’re down to two weeks left in region play, setting the stage for several big matchups with playoff and seeding implications.

Most teams still have a shot at the postseason if they haven’t already locked up a spot, while several still have chances at home-field advantage in the opening round.

It should lead to an exciting week of action with nine total games on this week’s schedule.

Thompson vs. Oak Mountain (Game of the Week)

Easily the best game in the county this week, the undefeated Thompson Warriors will play host to the one-loss Oak Mountain Eagles. These two teams have been good in their own right this season, but it has been the Warriors who have dominated everyone. They have outscored opponents by a combined score of 400-26, giving up just three touchdowns and posting four shutouts through eight games. They’re scoring 50 points per game and giving up just 3.3 points per game. Yet to give up double digits, they’ll take on one of the best athletes in the county in Oak Mountain quarterback Evan Smith this week.

The Eagles are averaging 30.1 points per game under first-year head coach Tyler Crane, and the offense has utilized more than just Smith’s legs with Cade George, CJ Branson, Ethan Hammett and others stepping up. But it is Oak Mountain’s defense that is playing so well. The Eagles are giving up just 11.1 points per game. Aside from a 28-21 loss to Hoover, they have given up 19 or less in every game and 14 or less in five of seven. Expect that to allow the Eagles to have a chance in the opening half to hang around, but ultimately, the Warriors have too much of a size advantage and a mismatch at just about every position against every opponent they face. I do think the Eagles and Smith can be the first to put up double digits, but it won’t be enough. Thompson 38, Oak Mountain 14

Something has to give in this matchup featuring two teams with one win apiece at a combined 2-12. Vestavia Hills, however, has shown some improvement as of late, which could be the difference. Both offenses are struggling with the Jags scoring 15.9 points per game and Vestavia putting up 17.4 points per game. The Rebels, however, are giving up 28.3 points per game, compared to 36.9 from Spain Park. They also were extremely close to an upset against Hewitt-Trussville last week. The Jags have a physical offense that won’t back down, but there hasn’t been enough improvement to predict a win at this point. Spain Park 14, Vestavia Hills 28

It is a huge week for the Calera Eagles with a chance to clinch a playoff spot for the first time in Class 6A on their home field. Last week, they showed they could compete against the best in a 31-21 loss to Helena that they actually led 21-17 midway through the final quarter despite a 17-0 halftime deficit. That came with the offense not playing its best game. They now get a Wetumpka team sitting at 4-4 struggling to score points. The Eagles played well defensively last week and have improved drastically on that side of the ball. Now they square off against a team scoring just 17.3 points per game. The Indians are playing well defensively, giving up just 19.4 points per game, but Calera’s offense should bounce back. A team that is scoring 26.7 per game and giving up 21.3, the Eagles will be right in this game. It’s time for them to prove just how improved they are this season. Calera 27, Wetumpka 21

The same can be said for the Chelsea Hornets this week as the Calera Eagles. They have to lay it all on the line. After a 0-4 start, the Hornets have now won three in a row to keep their postseason hopes alive, now they’re in a must-win game that will determine their playoff fate. While a loss eliminates them, a win likely clinches a spot in the postseason this year. And it is the offense that should make the difference. Chelsea is scoring 31 points per game and has scored 41 and 42 the last two weeks and 31 or more in the last five. That is thanks to Hayden Garrison, Thomas Simpson, Cooper Griffin, Matt Gray and so many others stepping up with an improving offensive line. The defense will have to play well, but they’re going up against an offense that is scoring just 8.3 points per game. Shades Valley did win 10-8 against Homewood last week, but I don’t see them having the offensive firepower to keep up with Chelsea this week. Chelsea 31, Shades Valley 20

It has been a chaotic four weeks for the Helena Huskies with four wins in a row by 10 points or less that could have easily gone the other way. But they found a way to win each and claimed their second region championship in three years with last week’s 31-21 win against Calera. Now, the Huskies have to find a way to come back from that emotional win to be focused for matchup with Stanhope Elmore. The Mustangs enter this matchup 4-3 scoring 21.9 points per game and giving up 16.6 points per game. The Huskies, however, are scoring 36.4 points per game and giving up 19.3 points per game. The defense struggled for a few weeks, but looked much better last week. With Jordan Washington playing so well at running back and the defense hungry to get back to its dominant ways, expect the Huskies to roll into a bye week with another win. Helena 31, Stanhope Elmore 14

Montevallo continued to take care of business last week in another strong offensive showing, and now the Bulldogs will need to do the same once again as they battle for a playoff spot. This week, it will come against a 2-5 Holt team that is 2-2 in region play. Montevallo has scored 49, 37 and 48 last three weeks to build average up to 32. 6 points per game, while the defense has played well at just 22.3 points per game. Holt is scoring 16.1 and giving up 40.4 points per game. Expect the Bulldogs to continue to roll on the offensive side of the football behind Joseph Anderson against a struggling defense. Montevallo 42, Holt 20

The Vincent Yellow Jackets are hitting a big two-week stretch starting this week against B.B. Comer that will determine their playoff fate. The Jackets are coming off a 51-6 win against Randolph County to improve to 5-2 and now get a 6-2 B.B. Comer team that is playing well. Comer is scoring 41 points per game and giving up 20. That said, Vincent’s offense has played well at times this season at 34 points per game, while the defense is the best it has been in years. On paper, B.B. Comer looks to be the better team with 50 points or more in four of its last five games, but the Jackets will battle in this one. Vincent 20, B.B. Comer 35

Off two straight wins, the Coosa Valley Rebels are now 3-4 on the season and have clinched a playoff berth. This week, they’ll take on region leader Lowndes with nothing to lose. Lowndes, however, is 5-3 and one of the top teams in the AISA. Coosa Valley’s defense is playing well and the offense has drastically improved, which will make this more of a game than might be expected, but Lowndes should have enough to pull away in the second half. Coosa Valley 20, Lowndes 34

Coming off a bye week, Evangel has had an extra week to let the disappointment of a 41-30 loss to Ezekiel fuel motivation for the rest of the season. This week, the Lightning hit the road to take on the Tennessee Heat. Normally a top contender in Tennessee, the Heat are just 2-7 this year. Expect Evangel to bounce back with a strong showing this week to show this is still one of the best 8-man teams in the country. Evangel 44, Tennessee Heat 20