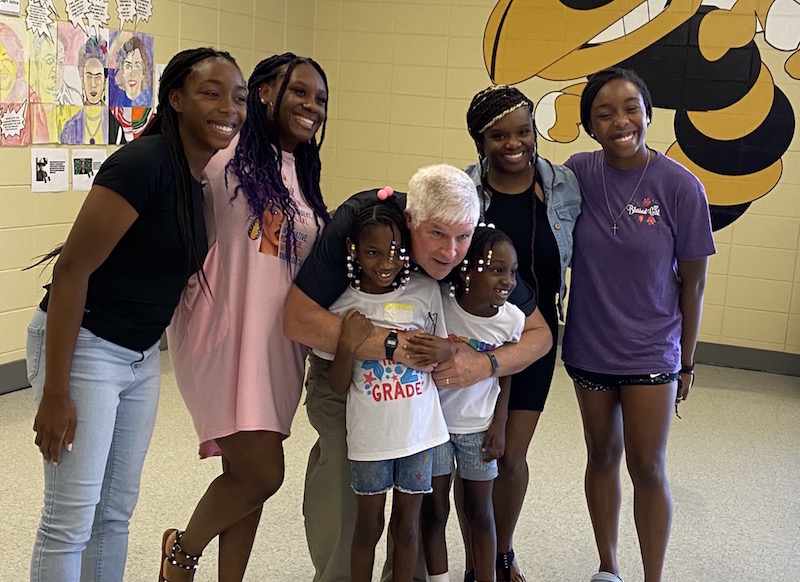 Several gathered to honor and celebrate Major Stanley Murrell at his send-off party on Oct. 8, celebrating everything he did for the Vincent Middle High School JROTC program. (Contributed)

VINCENT – Do you remember your dreams at 5 years old? Major Stanley Murrell, the senior instructor for the JROTC program at Vincent Middle High School, has a vivid recollection.

“When I was 5 years old, playing outside, I would look up at planes flying over and think to myself, ‘That is what I want to do when I grow up,’” said Murrell at his Oct. 8 sending-off party, organized by teaching partner Senior Instructor Sgt. Major Mary Kyser.

Leaving teaching to pursue the dream of flying, Murrell was honored at a lunchtime gathering of 75 fellow teachers and administrators, community leaders, friends and family who showered him with appreciation for his dedication to the program, the school and students.

Like most farewells, there were smiles and tears, gifts, food, and, of course, a few stories about the guest of honor. Unlike most farewell celebrations, the spotlight was shared.

Murrell’s wife, Julie, referred to by Kyser as a treasure, was also honored for her dedication to the JROTC program and for so graciously sharing her husband’s time with the school and its students.

She was appropriately acknowledged with gifts that represented her numerous roles: seamstress, nurse, military ball decorator and all-around encourager.

Murrell was the recipient of comments with a common theme—his impact. From administrative office attendees to community leaders, to faculty and students, the emphasis was on the impact this man had on either the school, the city or on their hearts.

As she took center stage to praise Murrell for his service, Bridgette Jordan-Smith, a former Vincent city councilmember quoted Matthew 20:28: “For even the Son of Man did not come to be served, but to serve, and to give his life as ransom for many.” Summing up her comments and expressing sincere gratitude, she said, “You have served well, impacting this community in so many ways.  Go be great and pursue your passion.”

While current students were not on campus, testimony of Murrell’s impact on the students’ lives was evident by the attendance, as well as the comments of former students.

Bridgette Stamps and her sister drove from Michigan to tell their instructor, whom they affectionately refer to as “grandaddy,” thank you.

“What you have done in our lives, words can’t describe,” Stamps said. “Thank you for bringing us into your family.”

Twins, Toni and Tion Wright, who are now at Jacksonville State University, later echoed the sentiment,

“The Major is like a father figure to all of us who were in upper class leadership,” Tion said.

Completing flight school at Fort Rucker, he learned to fly attack helicopters. He served in the U.S. Army for 22 years, was deployed on multiple assignments, and he was a Senior Army aviator and parachutist.

“I’ve had to make hard decisions, but its time to pursue the passion I’ve had since I was 5 years old,” an emotional Murrell said.

If ever there was an example of life coming full circle, this has got to be one. Blessings for blue skies and tailwinds friend.  Kick the tires and light the fires, Major!

Vincent puts up 51 points in region win against…