Column: One game shows the importance of sports in our world 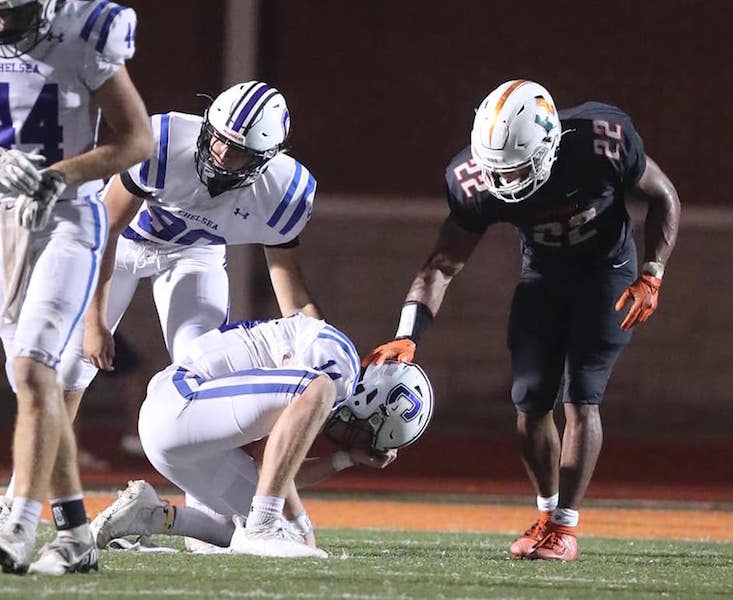 Huffman running back and athlete Makhi Hughes pats Chelsea’s Cooper Griffin on the helmet during a sportsmanship moment on Thursday, Oct. 7. (For the Reporter/Cari Dean)

One game had it all.

Playing for a fallen former teammate, lifting one another up during moments of heartbreak for both teams in the final 1:30 of the game and a truly unbelievable finish with an unbelievable storyline, the Chelsea/Huffman football game on Thursday, Oct. 7 exemplified the importance of sports in a young person’s life.

A game many think is now too violent or all about playing for money and individual success, this one game, filled with many different awakening moments, showed us a deeper passion.

Let me set the scene for you.

On Sunday, Oct. 3, family of former Chelsea standout receiver Michael Gibbs, who graduated in 2020, announced that he had died at 19 years old.

It sent shockwaves through the Chelsea community, including the football team with former teammates and coaches devastated by his loss.

It was a tragic situation, but with Chelsea’s players wearing tape with the letters “LLMG (Long Live Michael Gibbs)” and “MG6 (Michael Gibbs 6)” written on it, the stage was set for truly special night just five days later when the Hornets met the Vikings at Huffman High School.

What made the game so special, however, wasn’t just the way it ended, but how each team was there to lift the other up in time of heartbreak.

The first of those moments was on display with 1:25 left.

It looked as if Chelsea was going to tie the game after scoring a touchdown in a back-and-forth game to make it 34-33. But on the extra point attempt, the snap was mishandled by one of the team’s stars—Cooper Griffin.

Normally a sure-handed receiver, Griffin couldn’t get a good handle on the snap, leading to a missed extra point and a one-point deficit.

Heartbroken, Griffin fell to one knee, put his hand to his helmet and couldn’t believe he had just lost his team the game—or so he thought.

In that moment, however, Griffin didn’t even realize that star Huffman running back Makhi Hughes of Huffman placed his hand on Griffin’s helmet in a heartwarming moment of good sportsmanship to lift his opponent up in a difficult moment.

What followed, however, was just as jaw-dropping.

The Hornets used their final two timeouts to force one last punt from Huffman with 25 seconds left.

The Vikings then mishandled a kick of their own, fumbling the snap, which led to Chelsea gaining control of the ball with 25 seconds left.

Right after, Chelsea quarterback Hayden Garrison hit MJ Conrad for a 30-yard touchdown pass that became the game-winner in a 41-34.

Get this, Conrad wore the No. 6 jersey, previously worn by Gibbs for several years.

Tapped up with the letters “MG6,” he caught a pass from his quarterback tapped up in the letters “LLMG” wearing the former jersey of the player who died just days earlier.

It was a moment that made you drop your jaw in disbelief, and no matter your beliefs, it made you feel like Gibbs was there looking down on his team orchestrating the moment.

It quickly made you realize, that this game is more than just guys pouring blood, sweat and tears into something they love, it brings you together and creates a lasting bond while teaching valuable life lessons you can’t get anywhere else.

After the game, Griffin saw the photo of Hughes patting him on the helmet while he was down on that one knee and told his mom, “He’s such a good player, he played everywhere tonight.” To which his mom replied, “He isn’t just good Coop, he is great.”

Yet again, a player on an opposing team lifting up an opposing player during a time of disappointment.

That is completely what this sport is about.

It’s not about winning and losing, as much as we want it to be, it’s about a team fighting for more than itself, it’s about players lifting others up whether they’re on the same team or not, and most importantly, it’s about setting the stage to make you a better person in life through the lessons it teaches.

That is why this game is so loved and always will be.