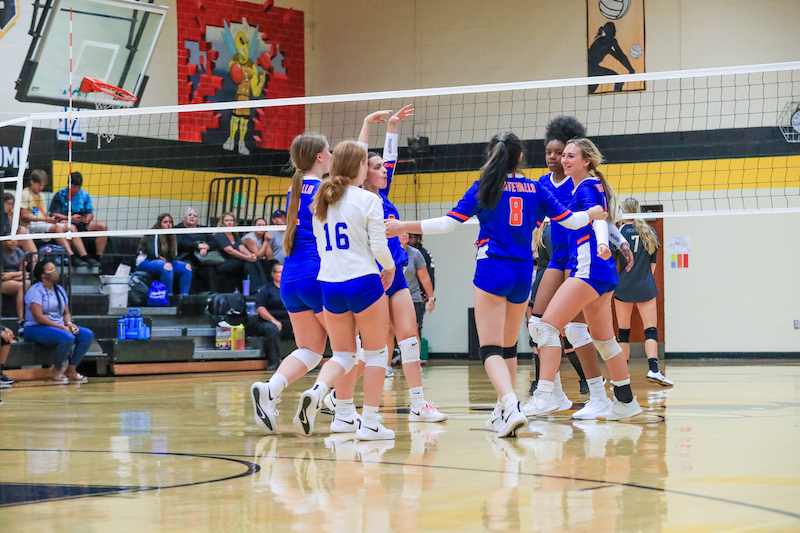 The Montevallo volleyball team took down West Blocton in straight sets on Oct. 13 to earn a spot in this year’s regional tournament in Montgomery. (For the Reporter/Dawn Harrison)

CENTREVILLE – The Montevallo Bulldogs kept their 2021 season alive on Wednesday, Oct.13 with a win in the opening round of the Class 4A, Area 5 tournament.

Needing just a first-round win against West Blocton, who the Bulldogs had beaten twice in straight sets earlier this season, Montevallo carried plenty of confidence into the tournament, and that confidence showed quickly.

In the opening set, Montevallo set the tone early and built a double-digit lead that was never relinquished.

The Bulldogs eventually pulled away for their easiest set win of the night by 14 points at 25-11 to take a quick 1-0 advantage in the match.

West Blocton, knowing how important it was not to fall into a 2-0 hole, battled back with a strong effort in the second set. The Tigers remained within striking distance for much of the set, but the Bulldogs were still too much, especially late.

With an impressive push, they pulled away yet again, this time for an eight-point 25-17 victory to take a 2-0 lead in the match.

That put the Tigers in the position of needing to win three consecutive sets to keep their season alive, while Montevallo got to play with the comfort of needing just one more set victory and three opportunities to get it.

But the Bulldogs only needed one more set to advance to regionals.

In similar fashion to the opening set, Montevallo set a dominant tone early due to the confidence, which led to an almost identical outcome. The Bulldogs went on to pick up a 25-12 victory to complete the sweep.

Paige Johnson led the Bulldogs in the win with 11 kills, while Teasia Purnell and Kailey Boyd both finished with seven kills. Camille Holmes was just one behind those two with six kills in a balanced attack.

Holmes was also big at the service line with a match-high six aces, while teammate Anna Kate Jackson finished with five aces. Boyd and Bailey Hamrick added 12 and 11 digs, respectively, to lead the team, while Jackson totaled a team-high 21 assists. Johnson also finished with double-digit assists thanks to 10.

Montevallo went on to fall in the area tournament championship to Bibb County in straight sets, but the Bulldogs advanced to regionals on Thursday, Oct. 21 at Montgomery’s Cramton Bowl.