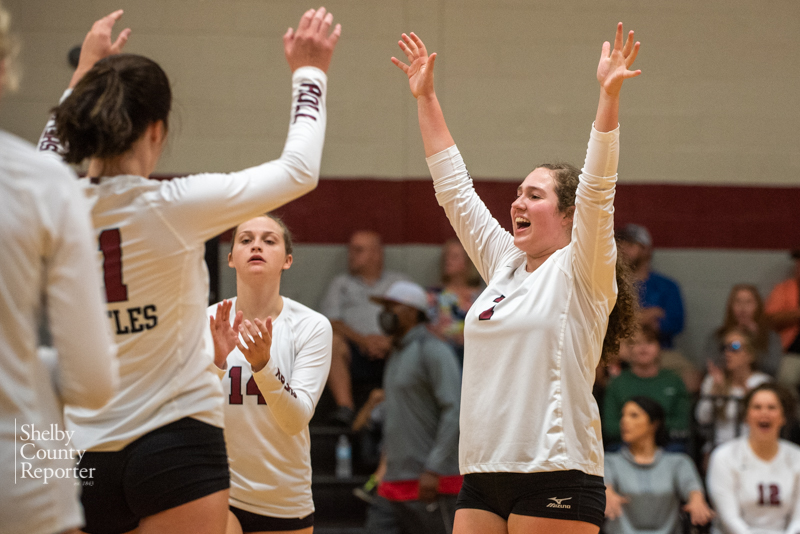 SYLACAUGA – The Shelby County Wildcats may not have brought home the area title on Thursday, Oct. 14, but they did keep their season alive.

On the road in the area tournament, the Wildcats squared off against Central Clay County in the opening round needing a win to advance to regionals, and that’s just what they got.

With two sweeps against the Volunteers during the regular season, Shelby County carried that confidence into the win-or-go-home match to pick up another straight-set victory.

The Wildcats had to work for each set, but they never did drop one en route to cementing a spot in regionals next Wednesday.

In the opening set, Shelby County was able to break a tightly-contested battle throughout with late success. The Wildcats earned set point at 24-22 and capitalized by putting the set away one point later for the 1-0 win.

The next set wasn’t any easier for the Wildcats, but they did get a point better each step of the way.

This time around, following another battle to the wire, Shelby County was able to pull off more clutch success for a 25-21 victory.

That second-set victory ultimately made the difference.

In a close match, having that 2-0 lead helped the Wildcats have the mindset of needing one more set to keep their season alive, while Central Clay had the pressure of needing to win three sets in a row.

Those differences showed in the third set, as Shelby County controlled the set most of the way before going on to pick up a 25-20 win to complete the 3-0 sweep and lock up a spot in regionals.

For their impressive efforts in both matches, Madison Wood, Ava Nettles and Emma Dudley were named to the All-Tournament Team. Those three have also been three of the team’s leaders most of the season.

The Wildcats will now play in the South Regional in Montgomery on Wednesday, Oct. 20 at 3:30 p.m.