Thompson handles Oak Mountain, improves to 9-0 ahead of Hoover showdown 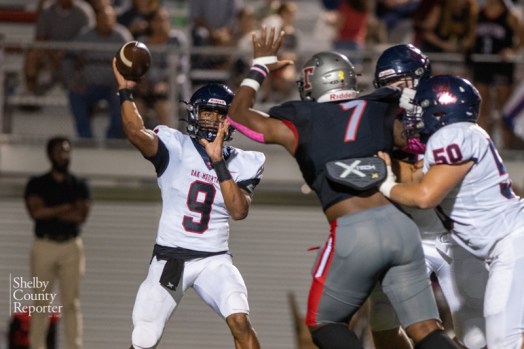 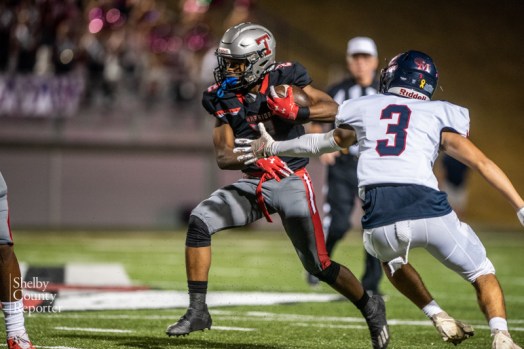 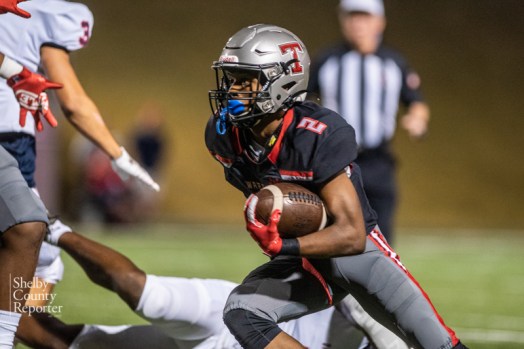 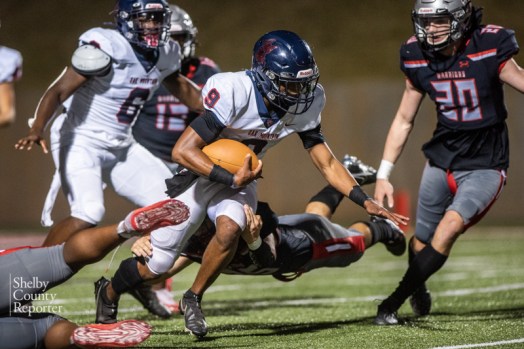 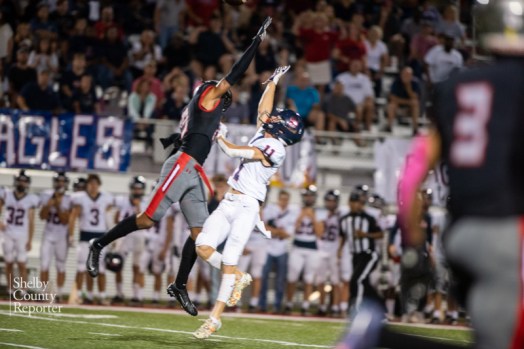 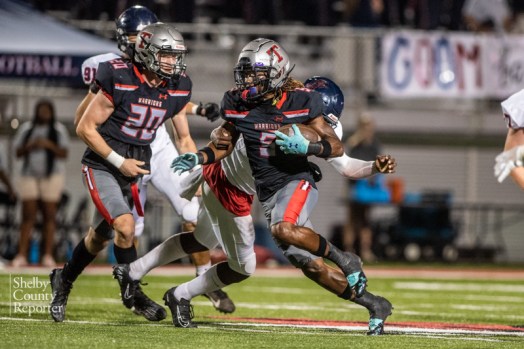 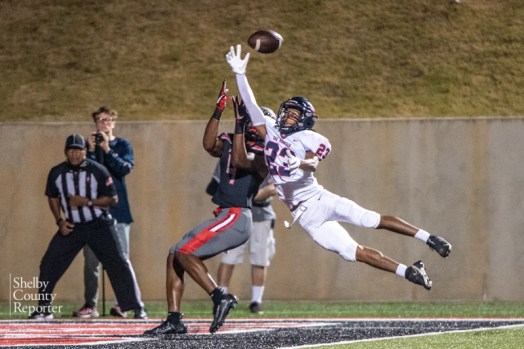 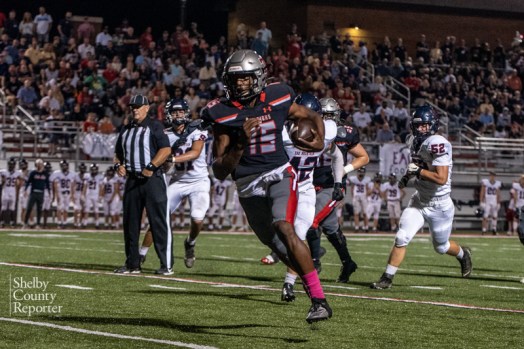 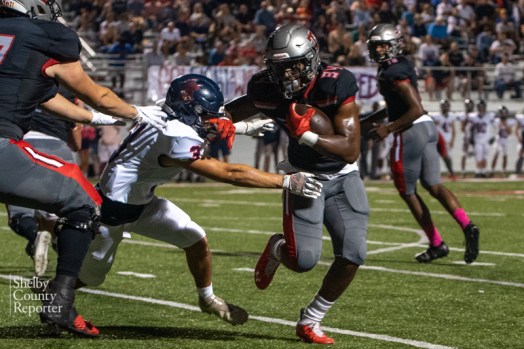 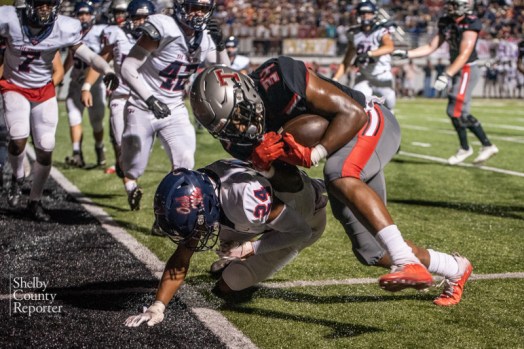 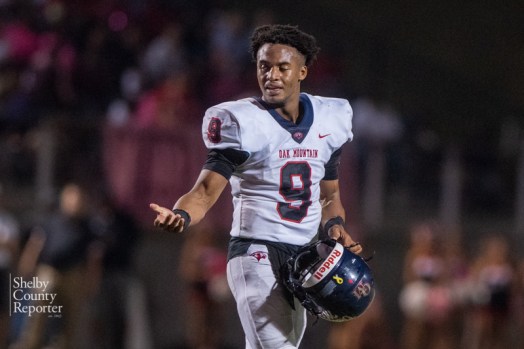 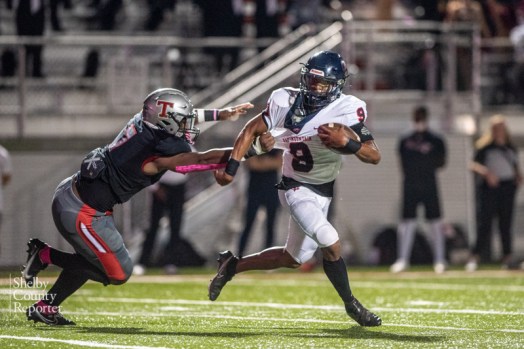 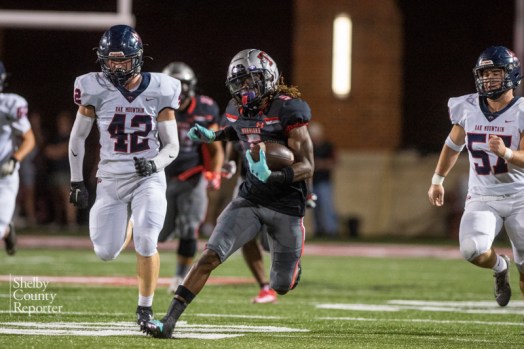 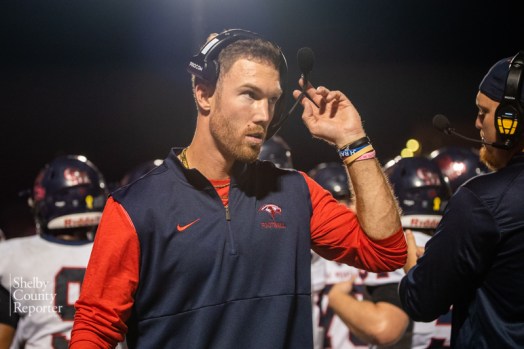 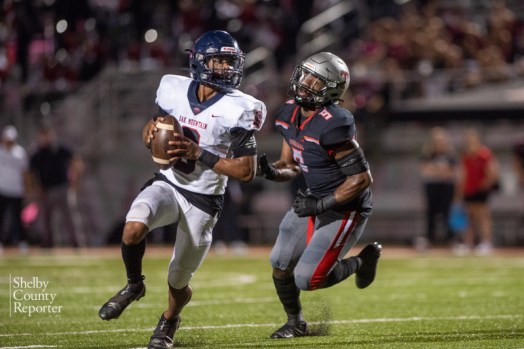 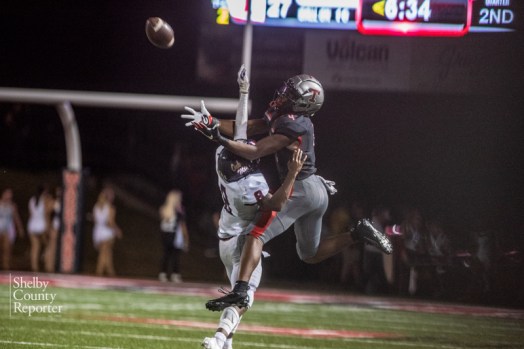 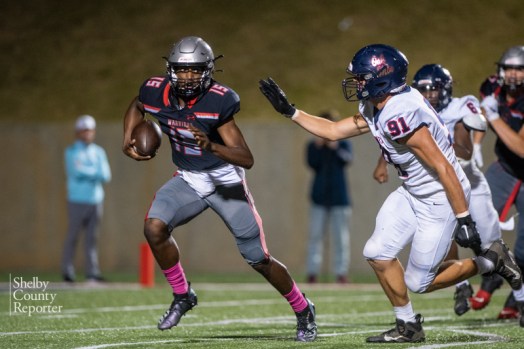 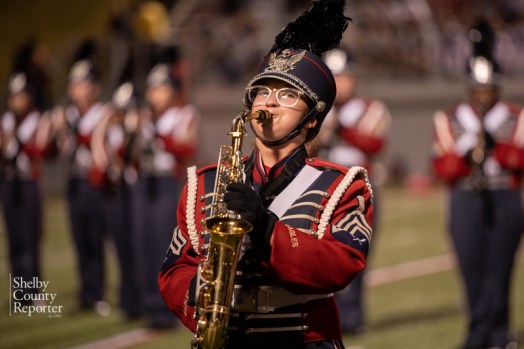 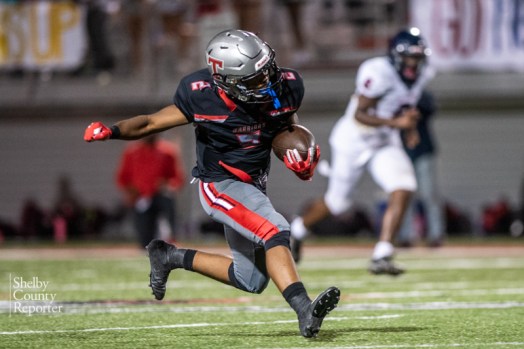 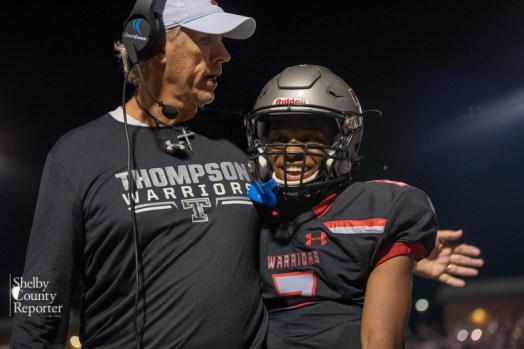 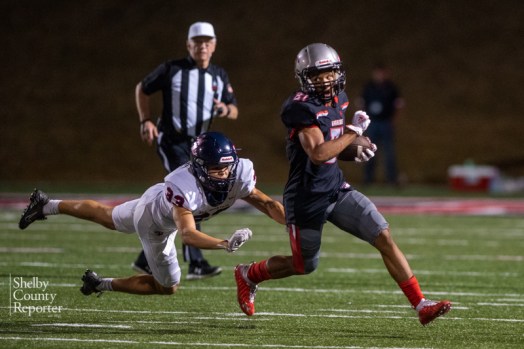 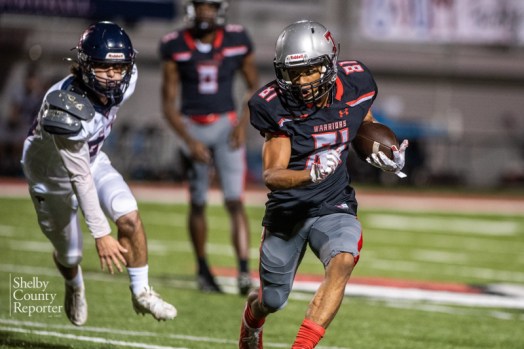 ALABASTER – Thompson quarterback Conner Harrell and receiver Ryan Peppins put on a show in front of the home crowd on Friday night, Oct. 15, as that duo put together career nights en route to leading the Warriors to a win against region foe Oak Mountain.

Harrell hit Peppins for four of his five touchdowns in the first half, and the Warriors never looked back from there. Those two connected one more time in the second half to lead Thompson to a 48-0 win against the Eagles to improve to 9-0 and pick up their 26th win in a row.

It was another impressive week for the defense, which posted its fifth shutout of the season, as the Warriors have now given up just three touchdowns through nine games for an average of 2.9 points per game, but it was the offense that stuck out to Freeman after the win.

“Conner played really good tonight,” Freeman said. “We needed him to come out and play a good game. We haven’t been really good on offense to this point, but I think tonight was our best performance.”

That performance included Harrell finishing 9-of-15 for 324 yards and six touchdowns, while Peppins totaled 222 yards and five touchdowns on five receptions. Justin Pegues added 93 yards receiving on three catches with a touchdown as well. All of that against a defense that had given up 11.1 points per game entering the night.

An anticipated top-10 matchup, it was Thompson’s offense that started fast in a game featuring two defenses giving up 11 points per game or less entering the game.

Following a three-and-out from Oak Mountain, the Warriors went to work and scored their first touchdown on a 29-yard pass from Harrell to Justin Pegues to cap a seven-play drive and take a 7-0 advantage in the first four minutes.

That was the start of three touchdowns in 12 plays for the Warriors in the opening quarter.

Oak Mountain’s defense went three-and-out on its next two drives as well, and the Warriors capitalized on the good field position with a touchdown pass of 16 yards from Harrell to Peppins and a touchdown run of 2 yards from Brandon Franklin.

That quickly put the Warriors on top 20-0 with 4:04 left in the opening quarter.

But after starting their first three drives at their own 17-yard line or worse, Devan Moss set up the Eagles in business on the ensuing kickoff, taking it across midfield.

Quarterback Evan Smith then went 23 yards on the next play, before Trey Vassell set up first and goal from the 10 with back-to-back runs totaling 13 yards.

The Eagles eventually earned second-and-goal from the 1-yard line, but a bad snap led to a snap and an eventual interception.

Thompson capitalized shortly after on a 40-yard touchdown pass from Harrell to Peppins to cap a quick three-play drive that covered 93 yards.

Oak Mountain’s Evan Smith, however, was heating up. Then, the game really took a turn.

After standing tall and taking two big hits, he completed passes of 21 and 33 yards on back-to-back plays.

The Eagles earned second-and-goal from the 4-yard line this time, but a false start pushed them back once again.

This time, Smith rolled out to his right, threw a pass and took a big hit well after the throw that sent him to the ground in visible pain.

A roughing the passer was called, giving the Eagles the ball back after the play ended in an interception.

The moment, however, created tension and made for a difficult few minutes for both teams with the star quarterback out of the game.

Thompson, however, eventually responded by getting two more opportunities to end the half.

The Warriors scored twice more on touchdown passes from Harrell to Peppins of 80 and 26 yards, while the Eagles missed on another opportunity in Thompson territory to create a 41-0 game at the half.

Coming out of the break, the Warriors got one last connection from Harrell to Peppins on a 60-yard touchdown pass in the first two minutes of the third quarter, which became the final score of the night.

Thompson’s defense was led by 3.5 tackles from both Jeremiah Alexander and Peter Woods. The dominant duo had 2.5 tackles for loss as well. Tony Mitchell added an interception, while the defense forced four turnovers.

Next up, the Warriors get No. 2 Hoover in a top-two battle of undefeateds to determine the region champion.

“You’ve got to take it one day at a time, one week at a time, because every team we play from here on, starting tonight, will be a playoff team,” Freeman said. “We have to have our best performances.”