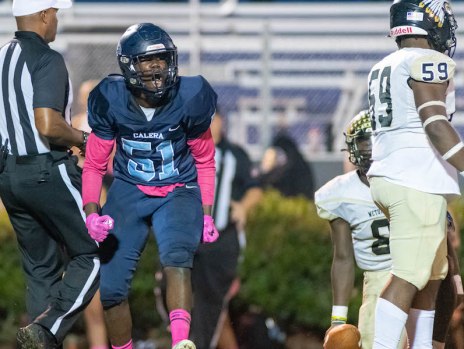 The Calera Eagles made big plays and picked up a late score to against Wetumpka on Friday, Oct. 15 to clinch their first playoff berth since joining the 6A classification. (For the Reporter/Neal Wagner) 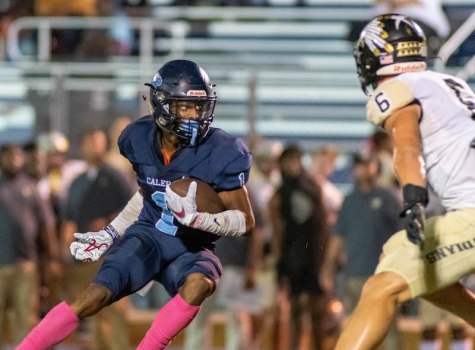 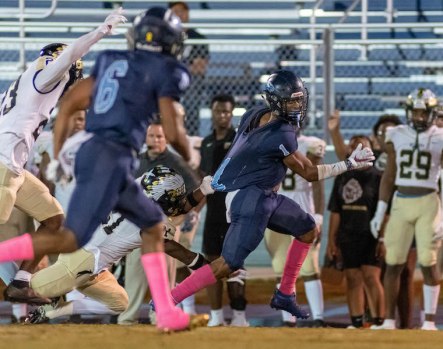 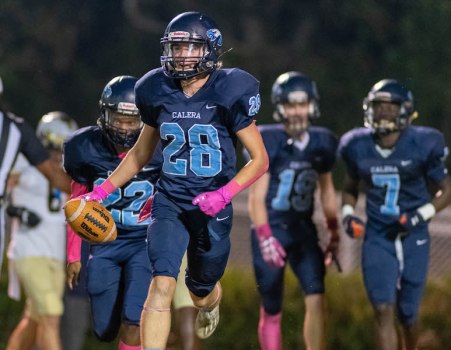 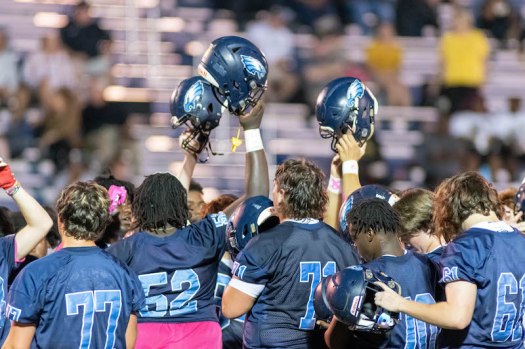 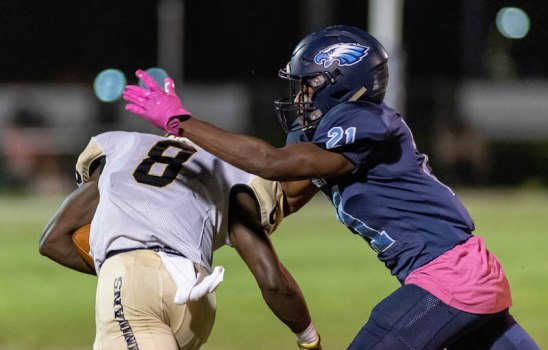 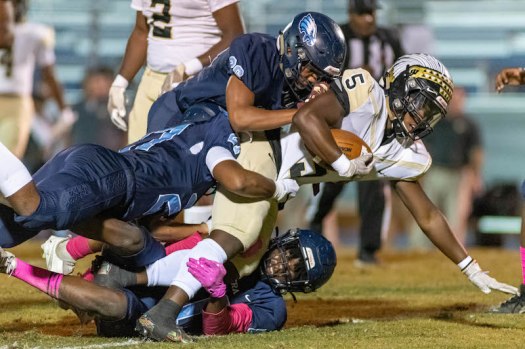 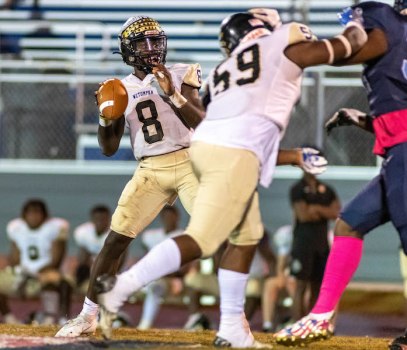 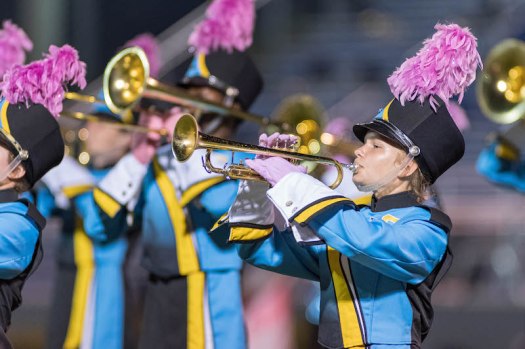 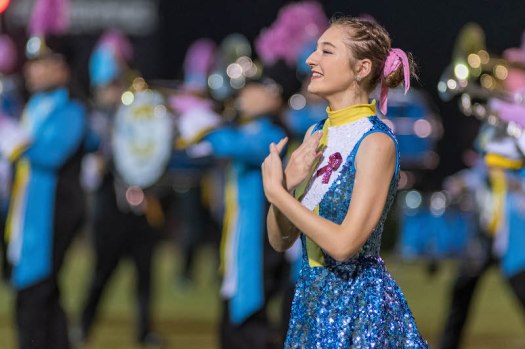 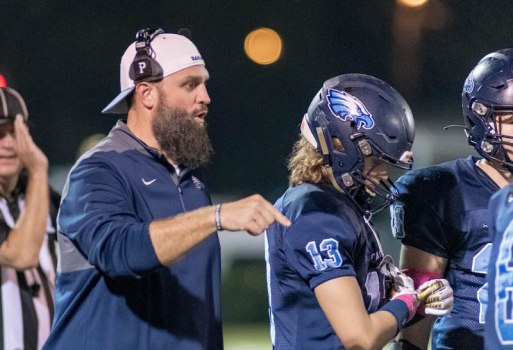 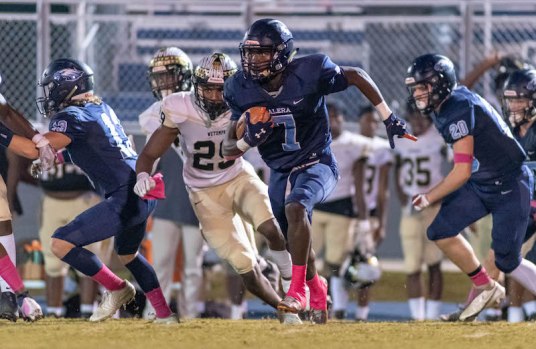 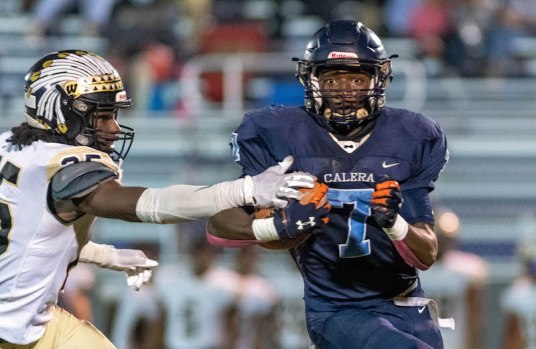 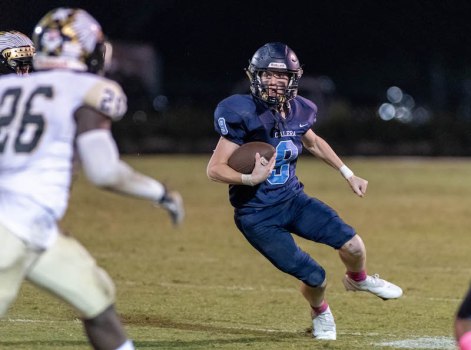 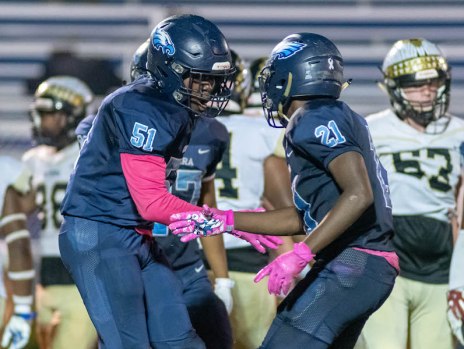 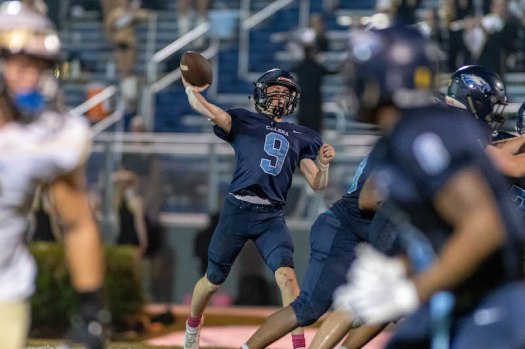 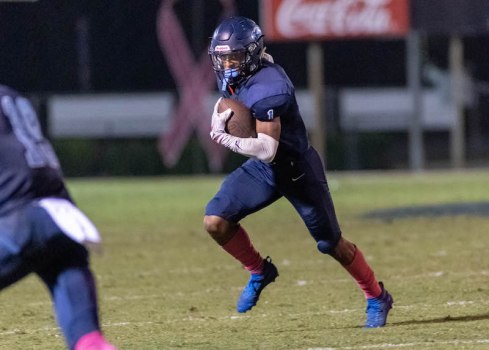 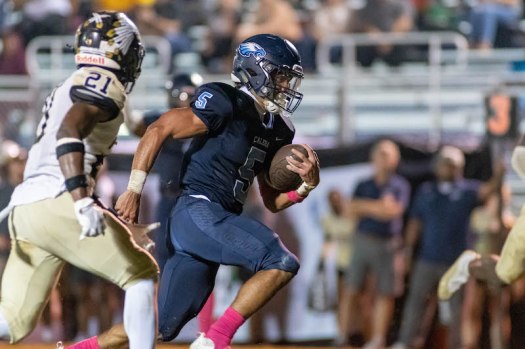 CALERA – It was a time for celebration Friday night in Calera as players and coaches celebrated a wild last minute 34-29 victory over the Wetumpka Indians as the Eagles clinched a playoff spot for the first time since joining the 6A classification in 2018 on Oct. 15.

It wasn’t easy, and late in the fourth quarter there was some doubt, but in the end, first-year Calera head coach Jason Hamlin got the Gatorade bath near midfield and celebrated with his players after a hard-fought five-point win.

“First off, hats off to Wetumpka because they came out and played lights out and this could’ve gone either way,” Hamlin said. “We had a couple breaks toward the end and that’s a really good football team so they need to keep their heads high. I mean for us, none of these kids have ever been to the playoffs so I’m just beyond ecstatic for them. They earned it and came out and fought in the second half to go toe-to-toe with Wetumpka and we came out on top.”

Calera started the game fast, racing out to a 15-0 lead as quarterback Preston Stokes found Braylyn Farrington for a 24-yard touchdown followed by a Wetumpka turnover, which also led to points.

Despite being down early, Wetumpka quarterback Nate Rogers made plays all night to keep the Indians within reach as he accounted for a rushing touchdown and a touchdown through the air.

Wetumpka’s first touchdown came on Rogers’ scrambling ability as a reeled off a long run to make it 15-6 at the end of the first quarterback. After the game, Hamlin praised Rogers’ ability to make plays.

“He was by far their secret weapon, but it wasn’t really a secret,” Hamlin said. “We knew all week we needed to try and keep him contained and at times we thought we had him contained but we didn’t. He made plays out of nowhere.”

While Rogers was impressive, the Eagles also had a secret weapon of their own, as Farrington came up with another huge play with the Eagles leading 15-13.

As the momentum swung to the side of Wetumpka after pulling to within two, Farrington took the kickoff and found a hole down the near sideline where he sprinted to the end zone for a long kick return touchdown to give Calera a 22-13 lead midway through the second quarter.

To end the half, Wetumpka tacked on a field goal and took its first lead of the game after a Stokes interception led to a touchdown a few plays put the Eagles in a 23-22 hole at halftime.

In the second half, both teams struggled the majority of the time offensively, but after an early third-quarter fumble, Stokes rebounded to make a big play to give Calera the lead once again.

With 23 seconds left in the quarter, Stokes dropped back and delivered a deep ball to Justin Green, who hauled it in and raced 65 yards for a touchdown. The score gave Calera a 28-23 lead heading into the fourth quarter.

Down once again, Wetumpka didn’t quit as Rogers hit a wide-open pass over the middle for a long touchdown to give Wetumpka a 29-28 lead.

But on this night, it was the Eagles who rallied and scored to clinch a victory.

With less than five minutes to play, Stokes and running back Daniel Carmona led the Eagles down the field.

Then, at the 19-yard line, it was Carmona who would busted through the line to score Calera’s go-ahead touchdown and make it 34-29 with 2:55 to play.

With little time left and needing a touchdown, Wetumpka faced a fourth-and-long at the Calera 22-yard line.

Rogers heaved a ball to the end zone, but the ball sailed high and the Eagles clinched the victory with 28 seconds left forcing a turnover on downs.

“We had been on our heels all night and we found a way to come together,” Hamlin said of the final defensive stop. “We’re a little shorthanded and have some guys battling injuries, but we came up and made a play when we needed to.”

Stokes finished the night 10-of-19 for 160 yards and two touchdowns, while Farrington had three catches for 28 yards and a touchdown as well as the 86-yard kickoff return for a touchdown. Green added two catches for 71 yards and a score, while Kobe Prentice finished with 66 yards on four catches.

Defensively, Michael Banks-Mason had nine tackles with three for loss, while also adding a sack, a fumble recovery and an interception.

With the win, Calera moved to 5-3 on the season and will take on Benjamin Russell next at home on Friday, Oct. 22.